Loren Miller commented on Loren Miller's group Quote Of The Day
"God is always the equivalent of ‘I do not know.’ -- Annie Besant Except that, to the…"
4 hours ago

Ian Mason commented on Sydni Moser's group Coffee Break
"Something to light up the day. "
9 hours ago

Ian Mason commented on Sydni Moser's group Coffee Break
"Home again after a weekend with my daughter and family. The grandsons seems to have endless…"
9 hours ago

With the passing of the queen and all the pomp and pageantry going on here in Australia, people are…See More
16 hours ago
0 Comments 0 Likes

Doug Hanlon replied to Lachailill McLennan's discussion Think about it and consult a dictionary before commenting. I've gotten some idiotic responses to this. in the group Quote Of The Day
"Patriotism is the extension -- in theory -- of an ethical principle to all the people of your…"
yesterday

Davy commented on Sydni Moser's group Coffee Break
"I will leave you with a few views upon the monarchy from the past. What can they see in the longest…"
yesterday

Loren Miller commented on Loren Miller's group Quote Of The Day
"According to Google: Schizophrenia is a serious mental disorder in which people interpret reality…"
yesterday

Chris B commented on Sydni Moser's group Coffee Break
"A good video, Stephen, and I totally agree. When the cleaning starts I'll throw in the Dutch…"
yesterday

RichardtheRaelian commented on Loren Miller's group Quote Of The Day
"Hello Loren! I fail to see how the bible connects with schizophrenia since I'am a…"
yesterday

Doug Hanlon replied to Loren Miller's discussion The Big Picture: How We Got Into This Mess, And How We Get Out of It (Robert Reich) in the group Coffee Break
"Hmmm... everything was fine until that wicked Mrs Thatcher somehow managed to get into…"
Saturday

What Can We Do When Democrats Embrace Christian Nationalism? 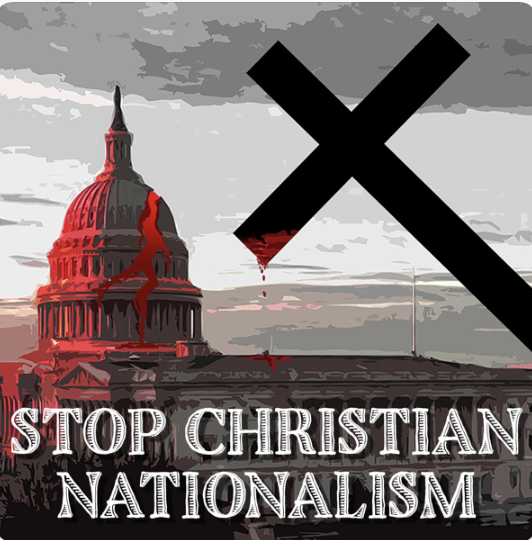 This week, however, America received a reminder that Christian Nationalism has a grip on the Democratic Party as well.

You may have heard that Joe Biden gave a speech this week in which he warned that the Trump wing of the Republican Party is a danger to democracy. What you may not have heard, and may not have noticed if you didn’t listen to the speech yourself, is that even while Biden condemned the ideological extremism of the Trump Republicans, he embraced the Christian Nationalism that motivates that extremism.

“I ran for President because I believed we were in a battle for the soul of this nation.  I still believe that to be true. I believe the soul is the breath, the life, and the essence of who we are.  The soul is what makes us us. The soul of America is defined by the sacred proposition that all are created equal in the image of god.”

Then, Biden ended the speech with a Christian Nationalist religious invocation:

The concept of the United States as a Christian nation created and protected by the Christian god, defined by sacred beliefs in religious notions such as souls and divine creation of humanity, is straight Christian Nationalism.

It is not necessary for politicians to end every speech with a Christian religious blessing. Joe Biden could end his speeches by saying something such as “I believe in you, and I believe in America.”

The purpose of the Christian Nationalism language in Joe Biden’s speech was to send a message to Christian Nationalists who currently support Donald Trump. The message was this: Joe Biden and his Democratic followers won’t do anything to end Christian privilege in America. Under Biden, Christians will continue to enjoy special rights that are denied to members of other religions and to people who are not religious.

So What Do We Do About It?

There was a time when non-Christian Americans would accept such treatment as a part of the way things are. We thought our best option was not to complain, not to be disagreeable.

After the Trump years of Christian Nationalism violently attacking American democracy with the support of the White House, after the Christian Nationalist Supreme Court's attacks against separation of church and state in the summer of 2022, we can't continue the old tactic of standing silently by and hoping that we won't be targeted if we remain in the shadows. That tactic didn't work.

It's time for non-Christian Americans to demand the respect that we deserve. Something around 40% of Americans are now non-Christians, and our portion of the American population grows larger every year. It's because Christianity is in decline that Christian extremists are lashing out, desperate to preserve their privilege.

The days of Christian normativity are over. Christianity is still the bully on the block, but Christians can no longer plausibly claim to be the only show in town.

Voting for a Republican is not a reasonable option. The GOP has become dominated by Christian Nationalists so extreme that their politics are difficult to distinguish from those of Adolf Hitler.

If Joe Biden is going to keep on publicly performing the rituals of Christian Nationalism, then non-Christians, and Christians who value the separation of church and state, need to support a Democratic challenger who is willing to commit to keeping religious belief separate from government service.

Without our support, Joe Biden cannot win the Democratic nomination in 2024.

If he's not willing to change his ways, we need to change our nominee.

This post is modified from an excerpt from the transcript of the latest episode of the podcast Stop Christian Nationalism.

That's kind of the attitude your comments express, yes. I'm not a troll-feeder.

Tom, if you'd care to explain yourself, I'd discuss. Nonsensical blurts are difficult to engage with.

Given that I don't believe in Hell, or Hel, I don't think I can give you an honest answer, Tom. Perhaps you could ask a question based on the here and now, rather than mythology?