Davy commented on Loren Miller's group Quote Of The Day
"I concur with what you say Loren. I like what Sonya expressed and the stitching of that new garment…"
12 hours ago

Stephen Brodie commented on Loren Miller's group Quote Of The Day
"Onyango. Many of the friends of Boris and his cabinet have become enormously richer through…"
12 hours ago

Onyango Makagutu commented on Loren Miller's group Quote Of The Day
"Joan, I think I agree with Sonya Taylor. But I am afraid that opportunity flew away long ago. Many…"
18 hours ago

Loren Miller commented on Loren Miller's group Quote Of The Day
"The concept of normalcy is a PERSONAL concept. The more one attempts to generalize…"
18 hours ago

Chris B commented on Loren Miller's group Quote Of The Day
"That would be something, Joan!"
19 hours ago

Joan Denoo commented on Loren Miller's group Quote Of The Day
"“And the people stayed home. And read books, and listened, and rested, and exercised, and…"
22 hours ago

Joan Denoo commented on Loren Miller's group Quote Of The Day
"It has been years since I read any of Shives works; I want to reread some of his material.…"
22 hours ago

Joan Denoo commented on Loren Miller's group Quote Of The Day
"“We will not go back to normal.  Normal never was.  Our pre-corona existence was…"
22 hours ago

Joan Denoo commented on Sydni Moser's group Coffee Break
"Mrs. B. I like, "kwitchurrbitchin!"  I am a proud member of the group. "
23 hours ago

Grinning Cat commented on Sydni Moser's group Coffee Break
"And Stephen, thanks for the laugh with "You Can't Hurry Lockdown"!"
yesterday

Grinning Cat commented on Sydni Moser's group Coffee Break
"Joan, I may have some immunity, but can't count on it, especially with the new variants. Still…"
yesterday

Mrs.B commented on Sydni Moser's group Coffee Break
"Or pass on asking for medical help when they get sick."
yesterday

The Tale of a Billboard for the RNC

It was something over a year ago that I learned that Cleveland was going to be the site of the 2016 Republican National Convention. The prospect of having a bunch of misogynistic, homophobic, mostly white guys invading The Best Location in the Nation was not a welcome thought, as you might well imagine, and that many of them were scornful of the concept of church/state separation did not help matters. However, I was encouraged by some discussion at a meeting of the Northern Ohio Freethought Society, which I had recently joined. In 2014, NOFS members had put up a series of billboards around downtown Cleveland, the purpose of which was to present atheists as every day, ordinary people who simply didn’t believe in a god. Their action first drew the attention of the Cleveland Plain Dealer, our local newspaper, and not long thereafter, me! Well, they wanted to do a billboard again, only this time, their purpose was to get in the face of the GOP during their political circle-jerk. Minor problem: most of our members have jobs and pursuing a location and timing and all that good stuff would have to be on a catch as catch can basis for them … but not for moi! Semi-retired, time on my hands, and with a definite mad-on about Republicans in general, I was ripe for the task and gladly volunteered. Our president hooked me up with her contacts with FFRF and Clear Channel Communications, and the next day (Monday), I got to work.

As it turns out, we had struck while the iron was hot. Clear Channel had just begun offering billboard space in the critical I-71 corridor, which connects Cleveland Hopkins International Airport to the downtown area. Multiple premium sites were available, based on the package supplied to me by CC’s representative. It wasn’t long before I had narrowed the choices down to two, and shortly after that, to one. I should mention that these billboards were not coming at the kinds of prices which NOFS had previously spent on their half-dozen displays a year earlier. Now we were talking about low five figures for ONE, and talk about getting a break by being a 501(c)3 organization gained us exactly zip.

Enter Annie Laurie Gaylor, co-president of the Freedom From Religion Foundation. I spelled out the situation and costs to her and oh, did she come through! After a bit of discussion between her, me and the NOFS president, we agreed to pick up the cost of materials for the billboard, while FFRF would cover the daunting tab for a four-week run of the message to be put there. Better yet, we had a premium location, literally one of the first billboards anyone would see while driving northbound on I-71 between the airport and downtown Cleveland. We were IN!

Ah, but now, what do we do for a message? The whole point of this business was to communicate to Republicans the importance of church/state separation, a topic which it seemed to me they were mostly loathe to acknowledge at all. As historic and potent John F. Kennedy’s statement was: “I believe in an America where the separation of church and state is absolute,” it wouldn’t have the desired effect. If this billboard were to have an impact at all, it had to be a message from a Republican to Republicans. So I did a bit of Google-searching, and as it turns out, a rather significant someone from the right side of the aisle HAD made such a statement regarding the necessity of keeping church and state each in their own venue. Questions came up about “Can we use this quote?” and “Are there legal or copyright issues?” and I began to wonder if our message could get lost in a bunch of legalistic wrangling.

As it turns out, there was no worry. Clear Channel, which was sold to Lamar in the intervening time, had its own internal discussions regarding our content and had no problem with it. As a matter of fact, they did the design work on the billboard, using the original FFRF John F. Kennedy artwork as guide. The result? It went up Monday, 28 June, and it stays up through the convention.  Have a look for yourself: 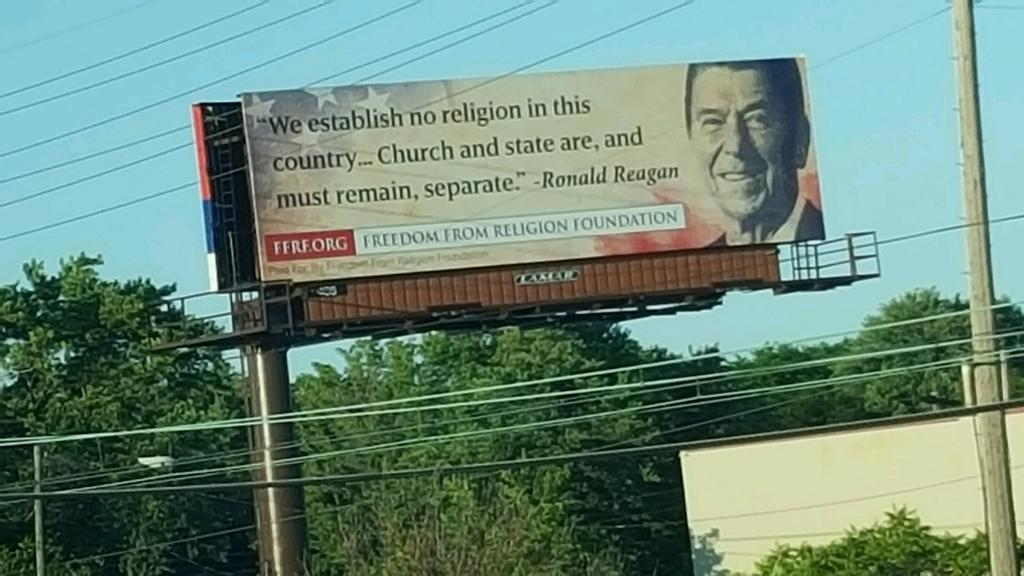 The quote is over 30 years old and the Republican party has changed by light-years since then, but the fact remains, Ronnie said it, and that’s what matters. Whether those attending the RNC get upset about it or not, our mission – to get in their faces – is effectively accomplished.

For those who are interested, here is FFRF's press release on the billboard.

As to local press, the Cleveland Plain Dealer did an article some time ago about those earlier billboards I mentioned, and it was quite positive.  In addition, one local TV station did a piece on the Michael Newdow suit being filed to remove "In God We Trust" from our currency, said piece involving one of our (NOFS) members being interviewed about the lawsuit.  Being in Cleveland, Ohio and well out of the bible belt means we generally get at least a neutral if not favorable reception when we make the news, and I am equally guardedly optimistic about this business.

When you said that your org. wasn't given any break in the price even though you have 501 status. I wonder if they give the Churches, with their charitable status any breaks. I suspect they do.

The Press can get really nasty over this sort of thing, especially the Fox variety.

Press releases are out and I expect some kind of reaction sooner or later.  As I said in the piece, the RR quote was critical to the whole business, and dear Ronnie was good enough to oblige us!

But still. Kudos to you, Annie Laurie and the FFRF. The idea of using Ronnie tickles me no end. Have you received any press attention yet, and do you expect to have any.

I had a LOT of help, Stephen, particularly from Annie Laurie and FFRF.  Without them, none of this would have happened.

Nice one Loren. The Republican delegates are driving down I-71 from the airport and they think aha a billboard with our Ronnie, they read. Exploding heads are happening all the way to the convention centre. Nice one indeed Loren.