Loren Miller commented on Loren Miller's group Quote Of The Day
"If God wants something from me, he would tell me. He wouldn't leave someone else to do this,…"
yesterday

Here's a few images for you to check out. What mighty city is this that needs such a show of force? Lansing MI, with a population of 114,000, is apparently under siege by the populace. At least one might think so looking at the following images. These are from today and there's not a protestor in site. 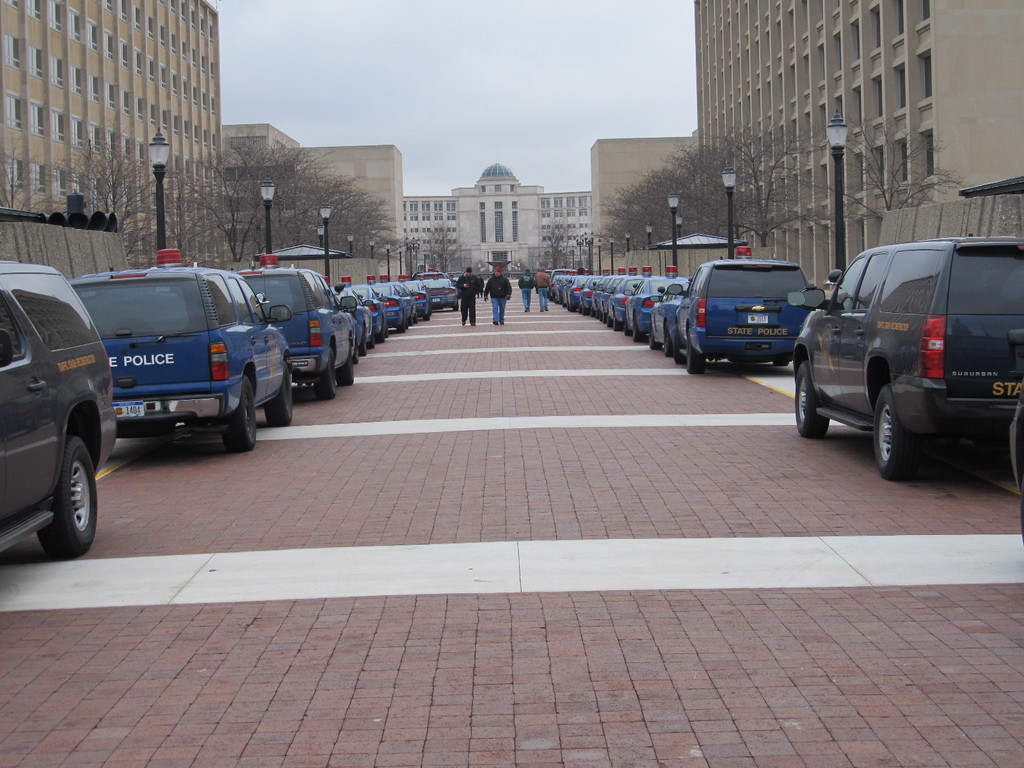 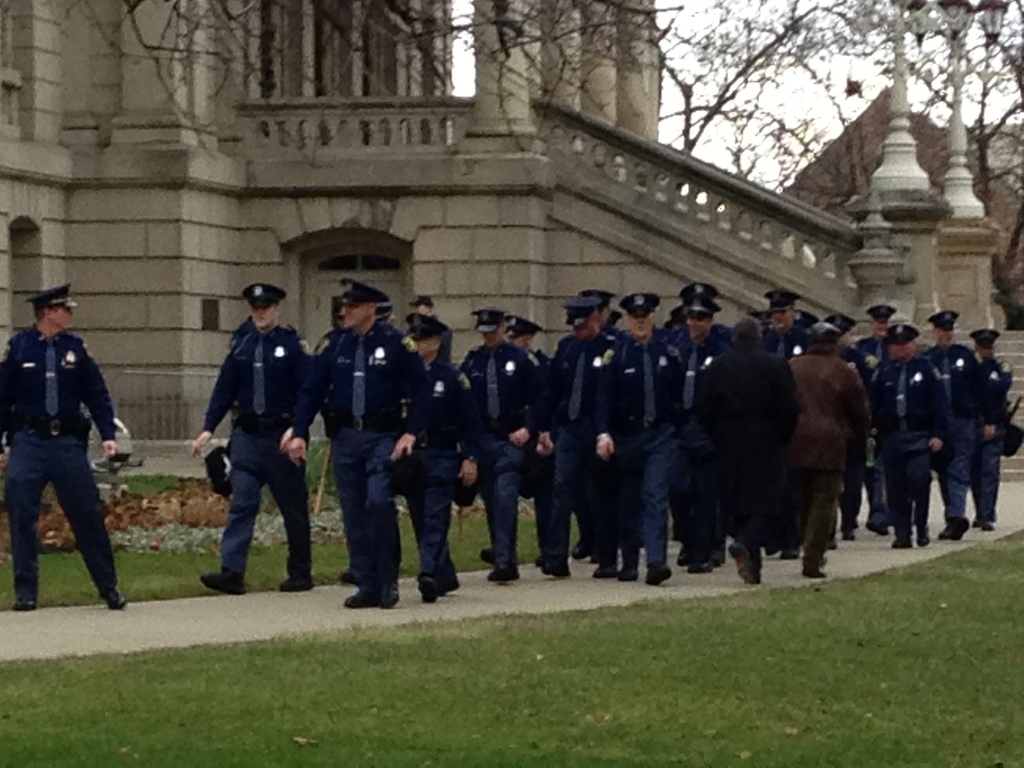 What might be the problem you ask? The usual conservative crap. In Michigan we have a conservative controlled legislature and governor, and it sucks. This show of force relates to current legislation, our friendly elected numb nuts are trying to make Michigan a right to work state. Destroying wages, benefits and unions so they can put a few more dollars in the hands of the rich. The only unions not effected is interesting enough, the police and firemen.

We now have a militarized force that is here to protect the rich, not the public.

Screw them. The fun begins tomorrow. I will be in the city at 8 am and join the march to the capital. There will be thousands of protestors, and we will gain entrance to the capital; it is ours.

Analysis of Flawed Right to Work Legislation Shows Governor, Republican Legislators, Had Never Reviewed Language Prior to Signing it Into Law

Lansing – Less than 24 hours after Governor Snyder signed his damaging “Right to Work” legislation into law, analysis shows that the flawed legislation may not even have the result the Governor claimed it would, raising serious questions about whether the Republican leadership even read the language of the bills before voting it through and signing it into law.

“It's become increasingly clear that the Governor presented the legislature with bills written by out-of-state extremists who had no understanding of Michigan's constitution or how our laws apply to Michigan workers,” said Senate Democratic Leader Gretchen Whitmer. “This is what happens when the Governor does an 11th hour about face in a lame duck session showing utter contempt for our people by cutting out all public input, scrutiny and debate. That isn't leadership, it's epic incompetence .”

Reports today show that HB 4003, which the Governor said would provide “Right to Work” type policies for public employees in Michigan, could not be implemented as intended as the Michigan Constitution gives clear authority to the Civil Service Commission over conditions of employment for the state's workforce. Experts have suggested today only a vote of the Civil Service Commission could enact Right to Work policies for state workers.

A series of questions have been raised in recent days over the legality of the “Right to Work” legislation as well as the process in which it passed. A lawsuit has already been filed against the Michigan House of Representatives for violating the Open Meetings Act as these bills were passed while the public was illegally locked out of the State Capitol and additional legal challenges are expected in the coming days

The following link is to the Australian Council of Trade Unions. ACTU . One of our former PM's was president of the ACTU. Bob Hawke! Most of Australia's if not all trade unions are affiliated with the ACTU. It will give you an idea of their history and how the trade unions work in Australia.

It is not perfect but there are checks and balances that catch out unethical and criminal behaviour of the members of the union including the officials. I belong to a union while I worked in civvy street even for a very brief time a union rep. Members of the defence force are bound by martial law but able to belong to defence force associations that have no impact on the performance of our duties.

There is a page of links, have a look at it.

I get it. State vs Federal jurisdiction.

Yes, the atmosphere in the workplace will be fantastic =/

Unions provide their own layer of ethics and work organisation (not always a good thing, but that's another story), how can an employer hope to 'integrate' the free-loaders into his pipeline without major disruptions?

I think the difference is is that the "representative" fee is 60 to 80% of the cost of union dues. So an employee in a union shop would not be forced to join the union, but would still have to pay for union expenses. That is how closed shops got around the law. (Yes, I found what Salon was talking about). To get the benefits of union representation, you had to pay one way or another, that is the "nuance."

What will happen at many businesses, especially with the economy not being that great, is that employees will opt to take more money home and the unions will not have the resources to continue business.

The law doen't prevent closed union shops, it allows states to become right to work states to circumvent closed shops. In Michigan, union shops were closed before this legislation.

As a federal employee, we were not bound by state law, so an employee did not have to join the union. This is what MI will now be like. Basically it puts employees at each others throat. Some of the worst employees I worked with were non-union, always in trouble for not doing their job. Union forced to represent them like MI will have to do now. Free services, no payment. We were strong union supporters, probably 80% union or so, but everyone hated to pay for the non-union guys. We'd do as little as possible for them, only going to battle if the problem would have consequences for union members.

From the Salon article:

So-called right-to-work laws ban union contracts from requiring workers in a bargaining unit to pay for the costs of representation. (Contrary to much rhetoric – and some reporting – U.S. law already prevents workers from being required to join a union or pay dues, per se. The issue is whether non-members, whom the union is still legally required to negotiate for and represent at work, can be required to pay representation fees.) Right-to-work defunds and discourages unions, and makes it easier for employers to discriminate against pro-union workers.

I'm not sure I get the nuance here.

If federal law already gives a free ride to non-union workers (prevents unions from requiring membership and dues yet forces them to represent those workers) what does RtW add to the mix?

What's the difference between dues and representation fees?

I had several meetings with Mark in 2005 while he was a Representative. I would trust his comments.

Hopefully someone has a video of the penny throwing and chants about labor being worth nothing.

The police treat tear gas and stun guns like a second request to move. I wouldn't want to have stuff thrown at me even if it was as small as pennies. Do the penny throwers think all workers labor is worth nothing? Eventually American wages will be the international average. The calculated worldwide living wage is $7500/year - That's what's being used in calculations for climate change agreements anyways. The more trade agreements are made the more wages in the U.S. will decrease.