Loren Miller replied to Loren Miller's discussion Prokofiev Piano Concerto No. 2, First Movement – My Memories in the group The Music Box
"Entirely my joy, Randall.  I should mention that YouTube has the rest of the concerto with…"
15 hours ago

Randall Smith replied to Loren Miller's discussion Prokofiev Piano Concerto No. 2, First Movement – My Memories in the group The Music Box
"Goodness Loren, I had no idea you were (are) so knowledgable about music! Impressive--as is the…"
15 hours ago

The Darnedest Things Do Happen

From the Darnedest things do happen department: 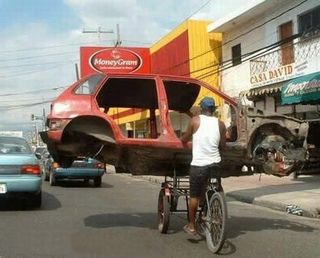 ▲ Houston car mechanic Edgar Garfield Gibbons, 41, returned to the U.S. in March after nine months in jail in Georgetown, Guyana, to which country he had been mistakenly deported when he was confused with a New Jersey man of the same name.

▲ Las Vegas police burst into an apartment and arrested a Florida murder suspect while he was watching "America's Most Wanted" on TV, believing that his crime would be featured that night.

▲ A 62-year-old woman thought a stranger punched her in the neck, but it was a stabbing, and the 4-inch knife remained in her neck for 40 minutes while she grocery-shopped before a passerby pointed it out to her (Darby Township, Pa.).

▲ In December in Alberta, John Ebeling, 40, lost control of his pickup truck, crashed into a speeding freight train (onto which the truck hooked and was dragged along the tracks), freed himself from the truck onto the side of the train, held on for about 12 miles until he managed to uncouple the car he was on (causing the train to brake and his rail car to smash into it), and rode the out-of-control car into a ditch. Thirteen cars were derailed, and power lines were downed, but Ebeling walked away with only minor bruises.

▲ A British Airways plane that made an emergency landing in Manchester because of smoke was carrying four women in the final act of a six-week course to overcome fear of flying.

▲ 1995 -- In July, the Maine Supreme Judicial Court upheld a $40,000 verdict against the Fort Kent Golf Club. Jeannine Pelletier had sued because, on the first fairway almost 10 years ago, she hit a golf ball that struck a railroad track that cuts across the fairway, and the ball bounded back and hit her in the face.

▲ A rapist sentenced to two life terms plus 110 years asked the judge for a lethal injection, saying, "I can't do that much time" (Prince George's County, Md.).

▲ In "The Bar," Norwegian television's version of "Survivor," 10 participants live and work together for 10 weeks, tracked by video cameras 24 hours a day on the Internet (with highlights shown each evening on television). In October, a 44-year-old man was arrested after he happened to choose, of all apartments to burglarize, the participants' home, while all were at work. As the man moved around the apartment gathering valuables, he was shown on 17 video cameras, and show staff rushed to the apartment and captured him after catching a glimpse on the Internet. [Scottish Daily Record, 11-2-00]

The murder suspect watching "America's Most Wanted" is just too funny. The rapist asking for a lethal injection comes close.