These words came in an official federal government Christian prayer from the taxpayer-funded US House Chaplain, Margaret Grun Kibben.

The official explanation of why the US federal government has official Christian prayers every day, with public money paying the salary of a Christian preacher is that members of the US Congress need religious guidance, or they just couldn't do their jobs.

The guidance from Chaplain Margaret Grun Kibben, however, passed the buck. Through her prayer, she told members of Congress that they couldn't rely on her, and they certainly shouldn't rely on their own intelligence. No, that would be "pride". They should simply surrender all their decision-making power to the Christian god. 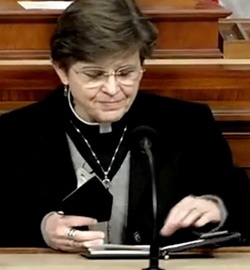 False gods? Which gods are those? Are Hindu gods false gods or true gods? What about the divinities of Shinto? Are those false gods? Margaret Grun Kibben has thrown down the gauntlet and told members of Congress that they need to start working on identifying gods that aren’t real, identifying religions that are phony.

Is this really the best use of the time of our elected representatives in Washington DC? Can it lead to any good for members of Congress to start separating out false gods from true gods, to begin choosing religions that have congressional approval, and religions that do not?

The Constitution is clear. This is not how Congress was supposed to operate. The Constitution declares that there shall be no religious test for any public office, but the position of Chaplain of the US House of Representatives comes at the very least with a test of a chaplain’s religious training, and with the de facto test of Christian identity. Remember, there has never ever been even one non-Christian allowed to have the job of US House Chaplain.

More broadly, Margaret Grun Kibben’s work in Congress undermines democracy by pushing our elected officials to listen more to her god, and listen less to the citizens of America. The thing is, democracy is all about people, not gods. In a democracy, we’re supposed to rely on each other. People are supposed to help people in a democratic society. We aren’t supposed to have a government that is dependent on any god, or any church.

Margaret Grun Kibben’s prayer is antagonistic to democracy, asking for the replacement of trust in people with trust in a religion: Kibben’s religion of Christianity. Even as she is appointed and paid a large salary by the US federal government, Kibben denigrates the idea that people can cooperate to govern themselves. She calls that idea “pride”, and calls for members of Congress to abandon their belief in the people power of democracy, replacing it with reliance on Christianity.

Chaplain Margaret Grun Kibben is doing nothing less than using public resources to promote the ideology Christian Natonalism, the belief that the US federal government should submit to the power of Christianity.

There are a lot of problems in the world, and in the US, but these ritual references to 'God' are among the very least of them, at worst.

But in the US, as adherence to organized religion fades away, many people will still want to believe in a 'higher power', which some of them will call God. In practice, they will act like atheists -- some will be cruel and selfish, some will be kind and giving, most will be in between.

The injunction not to trust in yourself, but rather to trust in God, is meaningless, since it's a "yourself" who chooses which god to trust in. And in the case of the God of the Bible, which of God's contradictory utterances to trust in.  Love your neighbor as yourself [Matthew 22:35-40]? Or kill him, his wife, his children and even his animals? [ (1 Samuel 15:2,3]

None of the Christians I know, not even those who call themselves 'Christian nationalists', say they want to kill me and my dog. And I'm not going to try to convince them that they're going against the word of God as shown in Samuel.  What that chaplain in Congress said shouldn't make anyone lose any sleep at night.

Rather, we should concentrate on what people do.  If a group of people cheers and laughs when they hear about the death of a political opponent who was not trying to harm them ... that's what we should condemn.

Once again, the Christian viewpoint is the default, and any other representation from religion or non-religion need not apply.  The very fact that Freedom From Religion Foundation co-president Dan Barker has repeatedly been refused participation in invocations for the House or the Senate is indicative of this prejudiced attitude.

That assumed standard is so entrenched now that I wonder if anyone in Congress is actively aware that this has become the status quo, and would they be disturbed or upset if they were alerted to it.