Stephen Brodie commented on Loren Miller's group Quote Of The Day
"Loren, I imagine it would have been much harder for a person to justify being an Atheist…"
2 hours ago

Joan Denoo commented on Sydni Moser's group Coffee Break
"Stephen Brodie, that "De Afsluitdijk:" video blows me away. Obviously, I am not an…"
15 hours ago

Fortunately it seems as if no one has been killed...but I wonder who committed the bombing? Why does one suspect it as retaliation for the Muhammad cartoons? So much with "peace and tolerance"

Edit: it seems as if at least one person has been killed with scores injured. 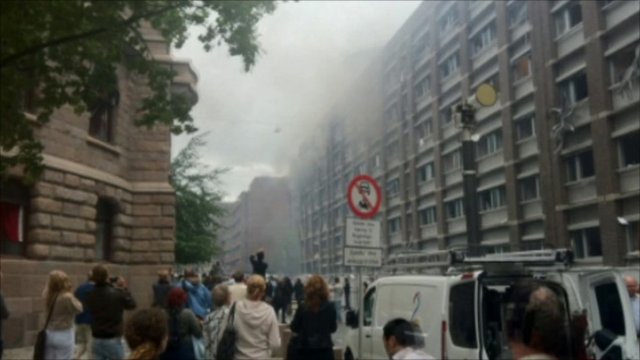 
A large explosion has hit near government headquarters in the Norwegian capital Oslo.

At least one person was killed in the city centre blast, national broadcaster NRK reports.

The offices of Norwegian Prime Minister Jens Stoltenberg were damaged extensively but he was reportedly unharmed.

At least eight people were injured, local media said. No-one has said they were behind the explosion.

Television footage from the scene showed rubble and glass from shattered windows in the streets - smoke was around some buildings. The wreckage of at least one car was in street.

All roads into the city centre have been closed, said the NRK, and security officials evacuated people from the area, fearing another blast.

Oistein Mjarum, head of communications for the Norwegian Red Cross, said his offices were close to the site of the explosion.

"There was a massive explosion which could be heard over the capital Oslo," he told the BBC.

Mr Mjarum said there were fires burning in the prime minister's 17-storey building.

"This is a very busy area on Friday afternoon and there was a lot of people in the streets, and many people working in these buildings that are now burning," he said.

Eyewitness Ole Tommy Pedersen said he was standing at a bus stop about 100m away from the blast.

"I saw three or four injured people being carried out of the building a few minutes later," Mr Pedersen told AP.

He said there was a cloud of smoke billowing from the lower floors.

An NRK journalist, Ingunn Andersen, said the headquarters of tabloid newspaper VG had also been damaged.

"I see that some windows of the VG building and the government headquarters have been broken. Some people covered with blood are lying in the street," AP quoted her as saying.

"It's complete chaos here. The windows are blown out in all the buildings close by."

Mr Mjarum said people were in shock in Oslo and across Norway.

"We have never had a terrorist attack like this in Norway - if that's what it is - but of course this has been a great fear for all Norwegians when they have seen what has been happening around the world."

Are you in Oslo and did you see what happened? Get in touch and let us know if you witnessed this event. You can send eyewitness accounts using the form below.

This is a concept shared by the Islamic community - those who are religious - to lie to benefit your faith - have you watched Undercover Mosque? It was a documentary made in the U.K. by BBC Horizon I believe - I suggest you watch it on youtube. It beautifully highlights the way Muslims lie consistently to give themselves one image to westerners in comparison to their inner beliefs and practices which they keep among themselves.

Taqiyya means one can lie about one's faith to avoid persecution or harm to oneself or others. This is also allowed in Judaism, actually, it's not only permissible but it is actually required (link to long scholarly article).

I don't buy those numbers because under Taqiyya - Muslims are allowed to lie to benefit their faith. No other faith has such a concept.

Apparently, his manifesto was a "false flag Sharia" operation. I kid you not:

Via ThinkProgess, who helpfully compiles a list of those Gaffney believes to be tainted by Sharia (it includes David Petraeus and Herman Cain). And this man is one of Michele Bachmann's key foreign policy influences

Just to highlight that number - 1/4 of most Christians, Jews and Atheists think it is okay to kill civilians for some reason but only 1/10 of all Moslems.

Muslims Against Violence The Most

From a new Gallup report: Muslims are more likely than any other religious group to disapprove of targeting civilians, whether it's done by the government or by a terrorist group. That means their views are most in line with international law, which prohibits the deliberate targeting of civilians under any circumstances. The finding is somewhat intuitive -- whether we're talking drone strikes or suicide bombings, Muslims are often the most likely victims.

I've been so caught up in the debt ceiling crapola that I missed the exposure of Pamela Atlas' exposure as a muse for the Norweigian terrorist. All the details are in this Alternet article.

But get a load of this:

In a post defending herself yesterday, Geller — who has called Obama “President Jihad” and claimed that Arab language classes are a plot to subvert the United States — reached a new low. Geller justifies Breivik’s attack on the Norwegian Labour Party summer youth camp because she says the camp is part of an anti-Israel “indoctrination training center.” She says the victims would have grown up to become “future leaders of the party responsible for flooding Norway with Muslims who refuse to assimilate, who commit major violence against Norwegian natives including violent gang rapes, with impunity, and who live on the dole.”

To get her point across, Geller posts a picture of the youth camp children Breivik targeted. The picture was taken on the Utøya island camp about 24 hours before Breivik killed over 30 children, so it is likely Geller is mocking many of the victims. Under the picture, Geller writes: “Note the faces which are more MIddle [sic] Eastern or mixed than pure Norwegian.”

She can scrub her web-site, but not her mind. She's is truly one of the most horrible people in America, right up there with David Duke and Tim McVeigh for sheer evil. I'm not surprised that she was an inspirational figure to a mass murderer.

A stupid comment by a stupid person about white people in Norway. 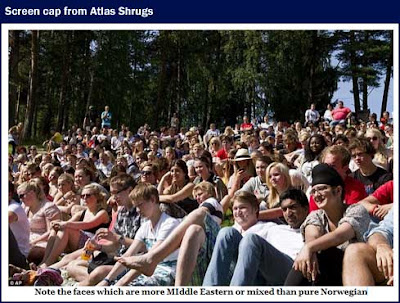 Our Lady of the Norwegian Jihad points out the real villains in the Norway attacks--the kids who were shot in the camp:

Utoya camp was not Islamist but it WAS something not much more wholesome (by our standards, at any rate). 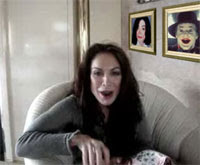 It was a summer indoctrination camp run by Norway’s ruling Labor Party for up-and-coming children of the ruling elite.

Glen Beck was not far off when he compared it to the Hitlerjungend or Young Pioneers.

The proudly white Mrs Geller also includes a photo to prove the children deserved their fate. She captioned it:

A tip of the ol' helmet to: @chelicerata. Here's his blog.

Update: Our Lady of The Screeching Jihad removed the caption below the photo.