Loren Miller commented on Loren Miller's group Quote Of The Day
"The whole thing [religion] is so patently infantile, so foreign to reality, that to anyone with a…"
13 hours ago

RichardtheRaelian left a comment for Ayumimori
""Happy Birthday!""
20 hours ago

Sports Heroes Attribute Success to God; Churches Use These Profits to Fund Hate

When Gabby Douglas won the Olympic Gymnastics All-Around gold, she proclaimed, “...I give all the glory to God, it's kind of a win-win situation. The glory goes up to Him and the blessings fall down on me.” She will be reiterating this sentiment in front of thousands of fans at Canyon Ridge Christian Church in Las Vegas December 1st and 2nd, 2012. This is a paid speaking engagement, the church communique explains: The church enjoys bringing these inspirational guests in for our community and congregation and sets aside funds each year for special services like these. The congregation provides untold sums of money, not a penny of which any tax is paid back to the city that provides the roads, power, water, fire and police services. Instead of the largely charitable contribution to society the church should provide, the unregulated and tax-free donations are often spent on promotional events, such as financing celebrities for the purpose of recruiting more worshippers. Tim Tebow spoke there earlier this year and naturally he attracted capacity crowds.

When I learned of Gabby Douglas' appearance, I didn't think too much about it, as I presumed it was merely meant to inspire young athletes and patrons alike. After seeing so many elaborate color-printed cards displayed at various Las Vegas locations advertising her visit, I thought I'd look into this church a little further. Gabby is an outstanding Olympic athlete who, unfortunately, is not a dynamic public speaker. Like the Tebow visit, Gabby's appearance is mainly orchestrated to attract potential new congregants.

First here are some basic facts about Canyon Ridge. It is most definitely a "mega-church", which is by definition any church with a weekly attendance of over 2,000 people. With an average weekly attendance of 6,000, Canyon Ridge can hold up to 3,000 at one time. There are two other mega branches of the church in the Las Vegas Metropolitan area: Central Christian Church, a church where over 5,000 members can attend at once. The third branch, The Crossing is a smaller version, but still qualifies as a mega-church. According to Christian Standard, The Crossing was planted by Canyon Ridge Christian Church on September 24, 2000, and is the youngest megachurch with an average worship attendance of 2,224 last year. Canyon Ridge, located in the northwest valley of Las Vegas, was birthed by Central Christian Church in 1993 and averaged almost 6,000 in attendance last year. Central Christian, also in Las Vegas, averaged close to 18,000 in worship last year. Those are some great church planting genes! I recognize many churches do charitable deeds, like many in the NY/NJ area are currently doing for victims of Hurricane Sandy. It's hard to pinpoint exactly what most megachurches do other than to try to increase their bottom line.

Like so many religions, Canyon Ridge is interested in promoting their faith by expansion all over the globe. They have partnered with the leader of Uganda's anti-homosexuality movement (AKA "Kill the Gays"), Martin Ssempa. Denounced by Pastor Rick Warren, who led the invocation at President Obama's Inauguration in 2009, Canyon Ridge's Pastor Kevin Odor refuses to cut ties with Ssempa citing the need to reduce HIV in Africa. Perhaps someone needs to inform Pastor Odor that HIV is rampant in Sub-Saharan Africa due to poverty, polygamy, lack of education and gender inequality, not just homosexual behavior. The law goes so far as to threaten imprisonment to anyone knowing active homosexuals and not reporting their "illegal" activities. He has yet to change his stance on this issue, which ascertains the conservative, fundamentalist agenda of this church.

As abhorrent as this is, I find the entire concept of brainwashing youth into a culture where God controls all the action creates superficiality and trivializes this contrived sense of morality. If God controls everything, isn't it presumptuous to interfere with the divine plan? I know many people take comfort in a supernatural deity, and I have no problem with that. What troubles me is the thinking God is so concerned with one's athletic success while this same God is ignoring plight, allowing babies to be born into abject poverty with AIDS. This creates a selfish culture which rewards obedience to an organization that enriches itself with absolutely no financial disclosure or accountability, while ignoring the real issues we as human beings should truly be concerning ourselves with. Merely praying for someone, or even charging money to have prayers answered is no substitute for food and medical assistance. It is a fraud, and deep down, most people know this.

Religion has a stranglehold over our culture. It's ironic we never hear about God's role in a post-game interview where the team loses. "We'd like to thank the almighty for this ass-kicking. Apparently it was exactly what we deserved." Largely this is a phenomenon of American athletes.

Giving God credit and thanks for opportunity in life, or the motivation to strive, is all but universal among the faithful. But something more seems to be going on here. Athletes are not just thanking God for opportunity and fervor -- they are crediting God for a competitive victory. This, in turn, seems to be suggesting something very specific about the inclinations of the Almighty. Has anyone paused to consider that for every winner, there is a loser (in fact, often a whole batch of losers) -- and that if God is choosing winners, then God must be choosing losers, too? Are the athletes who attribute their victory to God willing to "blame" God for the often-bitter disappointments of the vanquished?
Is it reasonable to hold God accountable for defeat and failure? Is it reasonable if the losers are good people -- just as good as the winner? Is it still reasonable if they are not only just as good, but also practitioners of the same faith, and just as pious? And what if they are just as good, just as pious, just as fervid, practicing the same religion, and worked just as hard? On what basis is God making such decisions? I suppose we might, as people tend to do when matters of faith are questioned, just throw up our hands and ascribe this all to the unknowable particulars of God's grand plan. But if winning and losing are equally prescribed in the grand plan, then are they really winning and losing? Isn't everyone doing an equally good job of doing the job God decided to give them? If the losers are every bit as good at doing what God wants them to do as the winners, then who are we to presume to declare them losers -- and give medals to the other guys?

Canyon Ridge Church provides spiritual enrichment for many of the faithful and of course is viewed as a positive influence in their lives. It's the young, impressionable children who are forced to believe this propaganda (which includes a God who always needs more money) who could be most easily manipulated. I watched a few online videos by Pastor Odor and found most of them were quite reminiscent of 700 Club solicitations . He's mainly concerned with reinforcing the belief in a higher being, as "God" is the answer to all things. That's paramount to his organization's success.

It seems this Las Vegas megachurch engages in the same level of deception many televangelists have been found guilty of in years past. Simply click on the giving link and you'll see how generosity is equated with holiness, which is deplorable in my opinion. I believe it is a form of abuse to influence children in this indoctrinating manner. By furthering an organization steeped in preaching intolerance and denouncing equal human rights, we are doing no service to the morality and emotional well-being of our youth, nor are we truly helping humanity. Jesus preached a message of love that didn't include a tax-free operation laden with corruption. Helping the poorest and neediest, including homosexuals, is more in line with his teachings.

One more reason to start taxing churches; they are businesses! Thanks for posting, Jessie!

As for athletes thanking god for their accomplishments or victories or even good luck, I find it positively obscene. Gabby Douglas is just a kid so it irks me less, she has not fully matured yet, but adult athletes drive me nuts when they thank god. Do they really think god is behind their success? God made a conscious decision to help them triumph but also makes a conscious decision to let babies and children die of starvation, infectious diseases, accidents and sometimes horrible abuses? Makes me want to vomit. 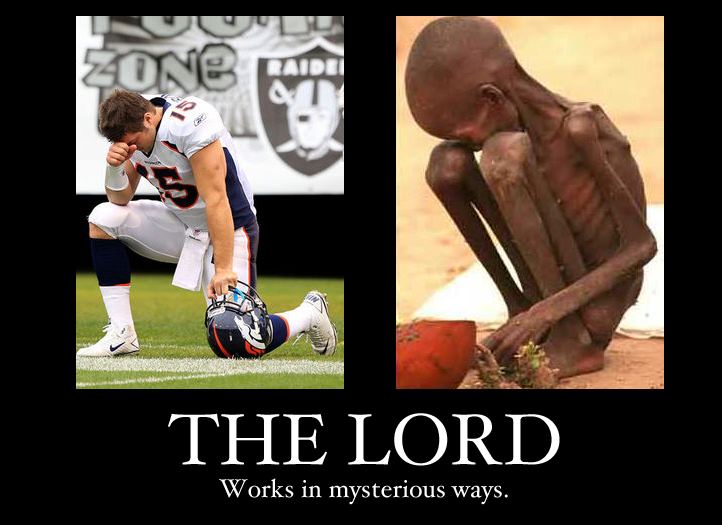 Sports and religion.
A marriage made in heaven...

Both thrive on huge crowds and require you to pray for God to be on your team's or congregation's side. And both can magically turn enthusiasm into cash.