Loren Miller commented on Loren Miller's group Quote Of The Day
"If it turns out that there is a God, I don’t think that he’s evil. But the worst that…"
3 hours ago

If we can find atheist ET's in the cosmos like the Elohim why not in the hollow Earth.
5 hours ago
0 Comments 0 Likes

Chris B commented on Adriana's group Science!
"It's everyday mysogyny as we've all experienced it. I'm glad Jocelyn Bell had…"
7 hours ago

Ian Mason commented on Sydni Moser's group Coffee Break
"Thank you for your kind words about us. A little romance can blossom even at our age."
8 hours ago

Joan Denoo commented on Sydni Moser's group Coffee Break
"Ian, that photo of you and Elna is a treasure! You look so vibrant and alive. The connected homes…"
8 hours ago

Joan Denoo commented on Adriana's group Science!
"Stephen,  Jocelyn Bell Burnell's story is so much like the women of my generation. I was…"
8 hours ago

Stephen Brodie commented on Adriana's group Science!
"Chris B the only solace from this story of misogyny is I believe things are slowly…"
9 hours ago

Stephen Brodie commented on Adriana's group Science!
"Jocelyn Bell actually made the discovery of Pulsars, but Anthony Hewish got the Nobel Prize…"
9 hours ago

Chris B commented on Adriana's group Science!
"Thanks for posting! She focusses on her work, not on her name, like men do. It's the same…"
10 hours ago

Mrs.B commented on Adriana's group Science!
"I cannot even imagine the depth of what she felt."
18 hours ago

Mrs.B commented on Adriana's group Science!
"Smart, strong woman to have to struggle with so much outside the work."
19 hours ago

Stephen Brodie commented on Adriana's group Science!
"I Changed Astronomy Forever. He won the Nobel Prize for It. What an injustice "
23 hours ago

Chris B commented on Sydni Moser's group Coffee Break
"I'm glad to see you look so good together."
yesterday

Ian Mason commented on Sydni Moser's group Coffee Break
"Sweetie Elna and yours truly in one of the old streets."
yesterday

Secular Party of America Rallies as National Sponsor of Apostacon 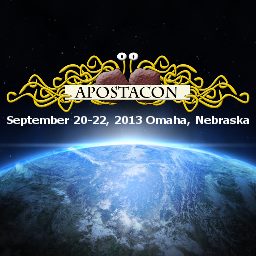 “Thanks to a generous anonymous donation from one of our members we were able to sponsor this year’s function; it goes without saying we are extremely appreciative and excited to be a part of the conference. This will be the first time that the Secular Party of America will be attending Apostacon and is our first major sponsorship of the year. We are honored to be working with such fine organizations.” said Deputy Vice President of Operations Victor Henzi who was instrumental in arranging the sponsorship.

Several members of the Executive Board will be attending and taking the stage to say a few words about the newly named Party to the expected great turnout of guests in attendance that has been “doubling every year since they began…” according to William Newman, chair of the Omaha Coalition of Reason, the coalition of groups behind Apostacon. Apostacon features a phenomenal line-up of speakers for this conference including such notable secular leaders such as David Silverman, President of American Atheists; Sarah Morehead, Executive Director of Recovering From Religion; Dr. Darrel Ray, renowned author and researcher; Amanda Knief Managing Director of American Atheists, A.J. Johnson Vice President & Co-Founder of Be Secular, Matt Dillahunty of the Atheist Experience, and Nathan Phelps (son of Fred Phelps) who left the Westboro Baptist Church in 1980. Also slated to speak is atheist activist & Secular Party of America member Aron Ra with a musical performance by Australian singer/songwriter Shelley Segal, and a Skype call-in by Richard Dawkins. The Secular Party of America will have two tables dedicated to voter registration, signing them up as new members of the Party, and selling some new exclusive Secular Party of America merchandise which will be unveiled for the first time at Apostacon.

Vice President of Outreach Ryan McCue added, “We are very excited about Apostacon and are very much looking forward to attending, as well as to starting a long lasting relationship between the Secular Party of America and the various organizations that make up the Omaha Coalition of Reason.“ Those interested in participating in the event are encouraged to contact the meeting organizers.

To sign up or for more information about Apostacon please visit www.apostacon.org.