Mrs.B commented on Doone's group Humans of Earth and a World in which the Most Powerful Person is a Rump News
"Beyond disgusting!!!!! https://www.bbc.com/news/world-us-canada-52108162 Los Angeles County is…"
8 hours ago

Mrs.B commented on Adriana's group Freethought and Funny Bones
"Good ones."
9 hours ago

Mrs.B commented on Doone's group Humans of Earth and a World in which the Most Powerful Person is a Rump News
"Only time will tell that story."
11 hours ago

Mrs.B commented on Hope's group Imagine No Organized Religion, Please! Looking better in 2020!
"Yes, I've heard of the bleach thing before."
11 hours ago

Stephen commented on Doone's group Humans of Earth and a World in which the Most Powerful Person is a Rump News
"Coronavirus: Johnson & Johnson vows to make 'not-for-profit' vaccine  (We shall…"
11 hours ago

Mrs.B commented on Doone's group Humans of Earth and a World in which the Most Powerful Person is a Rump News
"People need their foods, but the greed is incredible."
11 hours ago

Stephen commented on Doone's group Humans of Earth and a World in which the Most Powerful Person is a Rump News
"I see Scump in those pics is wearing his iconic red tie."
16 hours ago

Doone commented on Doone's group Humans of Earth and a World in which the Most Powerful Person is a Rump News
"Scump when he sees a reporter (Photo: FLPA)"
16 hours ago

Stephen left a comment for Emilysine
"Welcome to AU Emilysine."
17 hours ago

Stephen commented on Hope's group Imagine No Organized Religion, Please! Looking better in 2020!
"Onyango. The Pastor is more to blame every time. We're all naive at one time or the other, but…"
17 hours ago

Onyango Makagutu commented on Hope's group Imagine No Organized Religion, Please! Looking better in 2020!
"There have been incidents of people ingesting bleach on advise of their pastors charlatans and I am…"
18 hours ago

Each year, Muslims spend the ninth month of the Islamic calendar observing a community-wide fast. Muslims who are physically able are required to fast each day of the entire month, from sunrise to sunset. The evenings are spent with family and community meals, engaging in prayer and spiritual reflection, and reading from the Qu'ran.

Muslims all over the world abstain from food, drink, and other physical needs during the daylight hours. Ramadan is much more than just not eating and drinking.

Ramadan also was a pagan month in Arabia. In pre-Islamic times, Ramadan became a pagan Arabian ritual and was practiced by the pagan Arabians with the same features as the Islamic Ramadan.

Fasting was an important practice for the Arabians, It was practiced by the tribes of Medina Oas and Khazraj,before Mohammed came to them.

In the pre-Islamic Jahiliyah they fasted that month in the same way Muslims fasted, as originally directed by Mohammed. Pagan Arabian abstain from food , water, and sexual contact the same as practiced by Islam.

Mohammed  Kept these this rituals of fasting Ramadan as an Islamic pillar, see the Five Pillars of Islam .

Mohammed added his rituals to that pagan month to fit the religious rituals and customs of Oas and Khazraj, the two tribes from al-Medina.

@Adriana: Have only read The God Delusion so far.  Right now, reading a wonderful self-help book telling how you can defeat every argument of a believer: Victor Stenger's God: The Failed Hypothesis.  Although most of his points deal with scientific disproof of the possibility of god, he does include a chapter on my favorite argument, the argument from evil.

James, glad your oncologist is doing his/her job well. Which Dawkins book are you reading?

I'm in agreement again, Adriana.  But as I grow older I try to keep my cooking simpler.  In fact, I used a Moroccan chicken grilling recipe the other day that was simplicity personified: marinate cut up chicken in olive oil, garlic (lots), lemon juice, salt, and pepper.  But I cook the big international gourmet favorites, too, like curries (chicken korma and lamb in coconut are favorites), tagines, and beef bourguignon.  And, hey, Thanksgiving is my own personal fave.  I have much to be thankful for: I thank my oncologist for keeping me alive, and I thank my clients to pick up the co-pays, my groceries, and a new Dawkins book, and I thank my internet friends for their constant companionship.  I am just not so dumb as to pray in giving my thanks.

@Secret: in the Western world, cooking is no longer woman's work, plus, the best chefs are men (and that is sexist, of course); so secret, get out there and learn to cook :-))) Or ask your mom for the recipes :-)) I love curries, I love pakoras, samosas. Fruit chat is delicious! I have never been invited to the Iftar feast but I would love too! All the good food! I like religious traditions if they can be stripped to simply cultural traditions. I don't mind Christmas or Passover if it's all about being with family and friends, cooking and eating together, sharing some good wine (I know there is no alcohol drinking in Islam) and conversations.

You know, the silliest thing about that religion is that people go to Saudi Arabia every year just to walk counter-clockwise around a big black stone.  If every one of them spent all that time helping each other and taking responsibility for their lives, not sitting on their camels and claiming all is written, Allah wills it, and other submissive butt-exposed postures.  There is no god but Man.

@Adriana: I have control on myself while eating. So, surely I will not gain weight.

Yes Charity part is good but why only for one month. Why not give charity to ppl who deserve for other 11 months.

I have never made a recipe in my life I it women's job. Although I am already thinking about making few curry recipes, Thanks to you ppl. In Iftar there are Samosas, Pakoras, Chicken curry and vegetable curry and bean curry etc ( Don't know English names of vegetables/bean)

I like all vegetables and Fruit Chat (small piece of apples, peaches, bananas with spice and yougurt mixed).

@Hope, I think Samosas are like Kushari, but not same ingredients.

Very sad that your husband forced you to fast, So you keep your intact up till Iftar? are some kind you secret drinking, eating? Hmmmmm.............

add to some sumac , salt and pepper and onions.

let it stay for one hour. 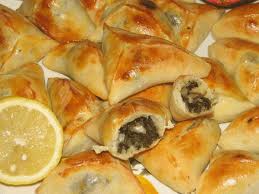 Oooo, I love baklava!! It's one of my favorite desserts!!!

@Secret: some of my Muslim colleagues have told me that they end up gaining weight during Ramadan because they overeat at night. Make sure you don't do that :-))

At least the charity part is a good tradition. the word "zakat" is very similar to "tzedakah" which is in Hebrew. This is the reason I understood what you were referring to.

Please share your recipes and what good foods you eat (especially vegetables and fruits) for Iftar.

And since you live in SA and it is HOT there, it is already good practice for when you burn in hell, LOLZ!!