Stephen Brodie commented on Loren Miller's group Quote Of The Day
"So many of the hymns I sang in church and school I quite honestly did take in most of their lyrics,…"
5 minutes ago

Stephen Brodie commented on Sydni Moser's group Coffee Break
"Mrs.B it's just unfathomable that a country like the US continues to allow gun ownership…"
28 minutes ago

Mrs.B commented on Sydni Moser's group Coffee Break
"That phrase has become one of THE most ridiculous set of three words I've ever heard!"
3 hours ago

Loren Miller commented on Loren Miller's group Quote Of The Day
"One last word about Amazing Grace: I HATE the lyrics ... and I mean HATE. All the yap about…"
8 hours ago

Loren Miller commented on Loren Miller's group Quote Of The Day
"I've made this observation before, but I think it's on point: There are people who have…"
9 hours ago

Ian Mason commented on Sydni Moser's group Coffee Break
"The right-wing in the US wants to ban abortions, not so there will be more children to adopt but to…"
11 hours ago

Stephen Brodie commented on Sydni Moser's group Coffee Break
"I hope I'm wrong, but just heard that the Texas shooting is the 24 school shooting this year"
13 hours ago

Mrs.B commented on Sydni Moser's group Coffee Break
"I think the US should stop having children & just shoot at each other."
14 hours ago

Onyango M commented on Sydni Moser's group Coffee Break
"The case of mass shootings in America is beyond belief. That they are not doing much to address it…"
14 hours ago

Stop by with you cup of coffee, shoot the breeze, take a break and just unwind. Have a good joke to…See More
14 hours ago
3634 Comments 4 Likes

Onyango M commented on Loren Miller's group Quote Of The Day
"Joan, you and I together. I enjoy Andre Rieu's redention of nearer to thee my god and some…"
14 hours ago

RichardtheRaelian left a comment for Demy
""Happy Birthday!""
16 hours ago

Joan Denoo commented on Loren Miller's group Quote Of The Day
"OK! I strongly agree that I am not a wretch, even as I confess that I am a musical illiterate. I…"
17 hours ago

Mrs.B commented on Sydni Moser's group Coffee Break
"Yes, Rick was just reading it on his news headlines. It's never going to stop."
20 hours ago

Loren Miller commented on Loren Miller's group Quote Of The Day
"Joan, I so associate the melody line with the lyrics as regards those songs that disassociation for…"
23 hours ago

Pascal's Wager is such crap.

Blaise Pascal (the 17th century French mathematician, physicist, inventor, philosopher, writer, and Catholic theologian) is world famous for his little "wager". Most atheists are painfully aware of it.

Pascal was inspired to write it in 1654, in one of his most famous works Pensées, after having a "religious experience". This unlikely state of mind puzzles me, since Pascal was an intelligent man who wrote in defense of the scientific method. (Science and superstitious beliefs make strange bedfellows.)

Pascal's Wager is essentially an argument intended to prove the existence of God. According to Pascal, we are all wagering with our lives, as to whether or not God does exist or does not exist. So why not conduct this wager logically?

Here is his advice: There are only two scenarios:

1) if God DOES EXIST: one stands to receive INFINITE PLEASURE by spending their afterlife in Paradise for an eternity—and avoid the eternal pain of Hell.

2) if God DOES NOT EXIST: one stands to receive INFINITE PAIN by spending their afterlife in Hell for an eternity—and avoid the eternal pleasure of Paradise.

Sign me up! I'm a believer! ...Oh...wait a minute. This "wager" is nothing but a simple logical fallacy called petitio princippi (begging the question). The entire argument is PRESUMING that God does exist and that heaven and hell also exist. But THAT is precisely what is in question: "DOES God exist?"

Sorry Mr. Rascal—er I mean Pascal—but you are nothing but a snake-oil salesman and your argument is as slippery as a preacher.

As a matter of fact, I can think of a far better wager: Permit me to call it "Andy's Wager"—and I fully expect to receive untold fame and fortune in the near future! (I wager I'll lose!) 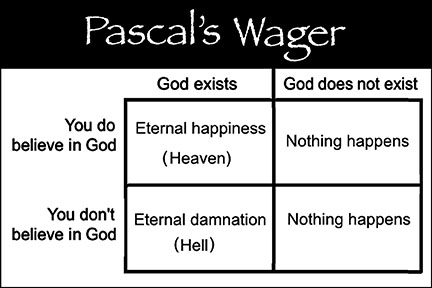 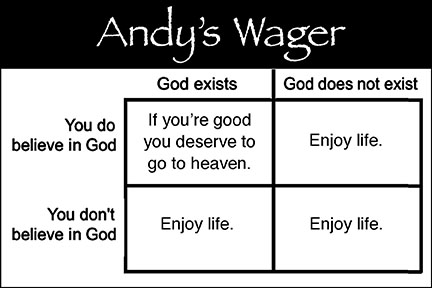 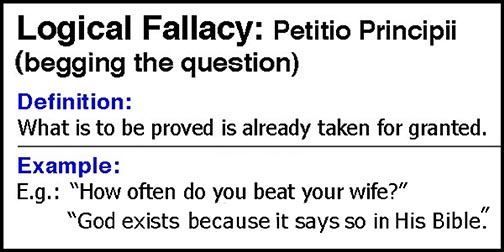 If there were a god, there would be no conflict within or between religious communities. Each would be called to treasure the gifts of living things and all people, without regard for gender, race, nationality, or institution. There would be no imperative to have dominion of one over the other but rather an obligation to live life fully and require that we participate as part of the fauna and flora of the planet.
Religions and their gods exist to explain and excuse power, one over another with the use of brute force if necessary. Why else would a so-called Christian god mandate that their members slaughter members of another religion or group or obligate women to submit to men simply because of their birthright? Why would any ethical and moral god call one group of people to conquer other groups, or steal land and property with impunity? How could one Homo sapiens enslave another?

If the United States was founded on the principles of Christianity, why were the Founding Fathers and Mothers so eager to put a wall of separation between church and state?

If the U.S. ethics and morals as defined in the Constitution, i.e. "to form a more perfect Union, establish Justice, insure domestic Tranquility, provide for the common defense, promote the general Welfare, and secure the Blessings of Liberty to ourselves and our Posterity, why were the Native populations exploited so badly, or the Africans, or the Chinese who built our railroads across the nation?

Hypocrites, manipulators, bigots, and sophists seem to have taken over not only our nation but the manner of the ways one can express his/her spirituality or lack of it. As to Pascal's Wager, he represents all that is fake, false, let's-pretend of the idea.

I write, not as a hater of the U.S., but as one who defends the basic principles upon which our nation was born.

I don't know if it's Facebook's algorithm or just policy but they seem to cut much of the criticism of religion but mostly Islam. The treatment by Facebook of Ex-Muslims is appalling.

I can't believe that Facebook doesn't allow me/us to REPLY to viewers' comments!

I guess Facebook is all about faces and not mouths. Wow.

"....Here is his advice: There are only two scenarios:

1) if God DOES EXIST: one stands to receive INFINITE PLEASURE by spending their afterlife in Paradise for an eternity—and avoid the eternal pain of Hell.

2) if God DOES NOT EXIST: one stands to receive INFINITE PAIN by spending their afterlife in Hell for an eternity—and avoid the eternal pleasure of Paradise...."

I like the topic but based on your other graphics and such, isn't number 2 above a misstatement of his wager?  If God does not exist, then there is no hell to spend eternity in, is there?  I must have missed something.

Further on that, Stephen: the only venue I know of where faith gets any traction is religion.  With any other objective discipline, you either show your work or you go home, put up or shut up.  And that said, I'm going to cite this again:

If I could change just one thing, it would be to dissociate the idea of faith from virtue—now and for good—and to expose it for what it is: a servile weakness, a refuge in cowardice, and a willingness to follow, with credulity, people who are in the highest degree unscrupulous.
-- Christopher Hitchens

And while I think about it:

If you've got the truth, you can demonstrate it. Talking doesn't prove it. Show people.
-- Robert A. Heinlein, Stranger in a Strange Land

Why wouldn't a half-decent god make its presence known? Faith is an overrated virtue in my opinion. And if I were to fake my belief in an all-knowing God wouldn't that God know?

I'm not religious, but I think Pascal gets a bad rap. He was a very smart guy, but the Wager is always misunderstood and oversimplified. Religious folks or atheists who think it means believe or burn in hell are missing the point.

There's an existential core to the Wager that is a demonstration of agnosticism: Pascal was saying that the human condition itself is a state of uncertainty and we can't know our way to the truth.

"We sail within a vast sphere, ever drifting in uncertainty, driven from end to end. When we think to attach ourselves to any point and to fasten to it, it wavers and leaves us; and if we follow it, it eludes our grasp, slips past us, and vanishes for ever. Nothing stays for us. This is our natural condition and yet most contrary to our inclination; we burn with desire to find solid ground and an ultimate sure foundation whereon to build a tower reaching to the Infinite. But our whole groundwork cracks, and the earth opens to abysses." - Pascal, Pensees section II

No god is going to show up and tell us to believe in it, and the facts depend entirely on context and interpretation. For those reasons, there's risk involved in such an important decision. The religious and secular worldviews are both a leap into the unknown. We can rationalize our choices after the fact using Scripture or science, but no one is simply obeying God's will or just following the evidence, we're making choices according to what's important and meaningful to us.

That's my take on the Wager.

And that's just off the top of my head. Pascal's wager amounts to “crossing your fingers,” which is pretty infantile, when you think about it.