Randall Smith commented on Sydni Moser's group Green Gardening
"Despite the abnormally chilly temps we've been having, the garden is looking good. Asparagus…"
21 minutes ago

Loren Miller commented on Loren Miller's group Quote Of The Day
"Tracie says it SO VERY WELL."
43 minutes ago

Stephen Brodie commented on Sydni Moser's group Coffee Break
"My Nieces lovely dog Comet went to one of his park buddies birthday party and had a smashing time.…"
3 hours ago

Chris B commented on Stephen Brodie's group Secularism in the UK and Europe.and the connection between much of the media and the Tory establishment. NEWS
"The N and the P are clear, but I don't know who are called the Y."
5 hours ago

Joan Denoo commented on Doone's group Humans of Earth News
"Sounds like the British voted in a bad leader as did we! I hope they find a new leader with skills…"
5 hours ago

Chris B commented on Stephen Brodie's group Secularism in the UK and Europe.and the connection between much of the media and the Tory establishment. NEWS
"One thing to start with is do away with all labels. If you look carefully there's almost never…"
5 hours ago

Joan Denoo commented on Stephen Brodie's group Secularism in the UK and Europe.and the connection between much of the media and the Tory establishment. NEWS
"As for "real beggars," I guess I would define them as people who need money for food,…"
5 hours ago

Joan Denoo commented on Stephen Brodie's group Secularism in the UK and Europe.and the connection between much of the media and the Tory establishment. NEWS
"What do you suppose it will take to end the use of the "N-word," "Y-word," and…"
5 hours ago

Mrs.B commented on Doone's group Humans of Earth News
"What is wrong with the voters who keep doing it?"
15 hours ago

Mrs.B commented on Loren Miller's group Quote Of The Day
"That's how they justified the unexplainable."
18 hours ago

Stephen Brodie commented on Doone's group Humans of Earth News
"  Elections 2021: Who (NOT) To Vote For."
19 hours ago

Stephen Brodie commented on Stephen Brodie's group Secularism in the UK and Europe.and the connection between much of the media and the Tory establishment. NEWS
" Onyango I don't know what sort of welfare payments people get in Kenya but I bet…"
19 hours ago

Onyango Makagutu commented on Loren Miller's group Quote Of The Day
"I was trying to read Santayana's book on reason but it is so dense I have had to put it aside.…"
23 hours ago

Onyango Makagutu commented on Stephen Brodie's group Secularism in the UK and Europe.and the connection between much of the media and the Tory establishment. NEWS
"Stephen, those beggars on London streets should come and do benchmarking here in Nairobi."
23 hours ago

Krampus: Where are YOUR naughty children? 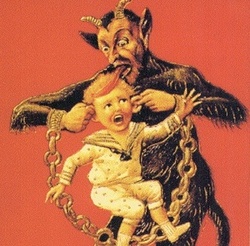 Krampus is a beast-like creature from the folklore of Alpine countries thought to punish bad children during the Christmas season, in contrast with Saint Nicholas, who rewards nice ones with gifts. Krampus is said to capture particularly naughty children in his sack and carry them away to his lair.

Krampus is represented as a beast-like creature, generally demonic in appearance. The creature has roots in Germanic folklore. Traditionally young men dress up as the Krampus in Austria, southern Bavaria, South Tyrol, Hungary, Slovenia and Croatiaduring the first week of December, particularly on the evening of 5 December, and roam the streets frightening children with rusty chains and bells. Krampus is featured on holiday greeting cards called Krampuskarten. There are many names for Krampus, as well as many regional variations in portrayal and celebration. The history of the Krampus figure stretches back to pre-Christian Germanic traditions. He also shares characteristics with the satyrs of Greek mythology. ]The early Catholic Church discouraged celebrations based around the wild goat-like creatures, and during the Inquisition efforts were made to stamp them out. However, Krampus figures persisted, and by the 17th century Krampus had been incorporated into Christian winter celebrations by pairing him with St. Nicholas.

In the 20th century, Austrian governments discouraged the practice. In the aftermath of the 1934 Austrian Civil War, the Krampus tradition was prohibited by the Dollfuss regime[4] under the Fatherland Front (Vaterländische Front) and the Christian Social Party. In the 1950s, the government distributed pamphlets titled "Krampus is an Evil Man". Towards the end of the century, a popular resurgence of Krampus celebrations occurred and continues today.There has been public debate in Austria in modern times about whether Krampus is appropriate for children.

Although Krampus appears in many variations, most share some common physical characteristics. He is hairy, usually brown or black, and has the cloven hooves and horns of a goat. His long pointed tongue lolls out.

Krampus carries chains, thought to symbolize the binding of the Devil by the Christian Church. He thrashes the chains for dramatic effect. The chains are sometimes accompanied with bells of various sizes. Of more pagan origins are the ruten, bundles of birch branches that Krampus carries and occasionally swats children with. The ruten have significance in pre-Christian pagan initiation rites. The birch branches are replaced with a whip in some representations. Sometimes Krampus appears with a sack or a washtub strapped to his back; this is to cart off evil children for drowning, eating, or transport to Hell.

A modern Krampus at the Perchtenlauf in Klagenfurt(2006)

The Feast of St. Nicholas is celebrated in parts of Europe on December 6. In Alpine countries, Saint Nicholas has a devilish companion named Krampus. On the preceding evening, Krampus Night or Krampusnacht, the hairy devil appears on the streets. Sometimes accompanying St. Nicholas and sometimes on his own, Krampus visits homes and businesses.The Saint usually appears in the vestments of a bishop such as the mitre, and he carries a ceremonial staff. Unlike North American versions of Santa Claus, in these celebrations Saint Nicholas concerns himself only with the good children, while Krampus is responsible for the bad. Nicholas dispenses gifts, while Krampus supplies coal and the ruten bundles.

A Krampuslauf is a run of celebrants dressed as the beast, often fueled by alcohol. It is customary to offer a Krampus schnapps, a strong liqueur. These runs may include perchten, similarly wild pagan spirits of Germanic folklore and sometimes female in representation, although the perchten are properly associated with the period between Winter Solstice and January 6. In larger cities, there may be numerous runs throughout theAdvent season.

Europeans have been exchanging greeting cards featuring Krampus since the 1800s. Sometimes introduced with Gruß vom Krampus (Greetings from the Krampus), the cards usually have humorous rhymes and poems. Krampus is often featured looming menacingly over children. He is also shown as having one human foot and one cloven hoof. In some, Krampus has sexual overtones; he is pictured pursuing buxom women. Over time, the representation of Krampus in the cards has changed; older versions have a more frightening Krampus, while modern versions have a cuter, moreCupid-like creature. Krampus has also adorned postcards and candy containers.

Krampus appears in various forms, and as part of differing celebrations, throughout central Europe. In Styria, the ruten bundles are presented by Krampus to families. The twigs are painted gold and displayed year-round in the house – a reminder to any child who has temporarily forgotten Krampus. In smaller, more isolated villages, the character has other beastly companions, such as the antlered “wild man” figures, and St. Nicholas is nowhere to be seen. These Styrian companions of Krampus are calledSchabmänner or Rauhen.

A toned-down version is part of the popular Christmas markets in Austrian urban centres like Salzburg. In these, more tourist-friendly interpretations, Krampus is more humorous than fearsome.

In the 1600s, the Lutheran Church presented a "christchild" figure in the place of the Catholic Saint Nicholas. Representing the baby Jesus but often appearing as a young maiden, this figure was also paired with Krampus in some areas. In France's Alsace region, Krampus is known as Hans Trapp and accompanies a "christchild" character during the holiday season.

North American Krampus celebrations, though rare, are a growing phenomenon.Some traditional Germanic communities in the northeast of the United States have preserved a Krampus tradition; in these he goes by Bellsnicholand combines aspects of both the wild man and Saint Nicholas.

The word Krampus (sometimes spelled "Grampus") is a derivation of the old German word for claw,but the creature has many names. Klaubauf is used throughout Austria, while Bartl or Bartel, Niglobartl, and Wubartl are used in the southern part of the country.Outside Austria, Krampus and related creatures go by Pelzebock or Pelznickel in southern Germany, and Gumphinckel in Silesia. In Hungary, he is Krampusz.

When you think back to how life was like in those days. The forests weren't that far away in which dwelt the bear, and wolves. So reminding the children to be good which also meant following what your parents told you may also save your life because the wolves move in closer to human habitation during the longer dark nights of winter in search of food.

I think children grew up knowing this, and also to this day in villages around Germany and most likely other places there is a day just for Krampus. Everyone dresses up, think our Halloween, so our kids really know it is not real, at least most of the time.  Wait hold on, don't we have people who are Vampires now? lol

Whoa. I guess Alpine people really knew how to scare the crap out of their poor children!!

LoL yes history is funny that way many fascinating things to learn.

Cool! Had never heard the name.

It's the stick part of the carrot-and-stick device. One of the big yearly reminders for kids to behave, this one well suited to the dark winter nights. A sort of "Children's Introduction to Hell" primer.