Stephen commented on Adriana's group Freethought and Funny Bones
"Scump stupidly orders the reopening of the churches because that's such an essential event."
3 hours ago

Doone commented on Doone's group Humans of Earth and a World that has a vain, cowardly, lying, vulgar, jabbering blowhard not a Man Scump News
"Scump may go down as the worst Amercian ever "Worst health crisis in a century. Worst…"
6 hours ago

Mrs.B commented on Adriana's group Freethought and Funny Bones
"There is nothing wrong with a mask...& there are a lot of fun, cute, pretty, plain, &…"
15 hours ago

Mrs.B commented on Sydni Moser's group Coffee Break without any Mention of that Idiot
"Or greeny-yellow on close up."
15 hours ago

Mrs.B commented on Sydni Moser's group Coffee Break without any Mention of that Idiot
"It's the flesh coloured one by the blue [France]."
15 hours ago

Mrs.B commented on Sydni Moser's group Coffee Break without any Mention of that Idiot
"Next to France, below Biscay Sea"
15 hours ago

Mrs.B commented on Doone's group Humans of Earth and a World that has a vain, cowardly, lying, vulgar, jabbering blowhard not a Man Scump News
"There ya go!"
15 hours ago

Stephen commented on Sydni Moser's group Coffee Break without any Mention of that Idiot
"I'll take your word on that. Lol. "
15 hours ago

Doone commented on Sydni Moser's group Coffee Break without any Mention of that Idiot
"Northwest of Russia, I think."
15 hours ago

Stephen commented on Doone's group Humans of Earth and a World that has a vain, cowardly, lying, vulgar, jabbering blowhard not a Man Scump News
"I wanna get me some of that beer. Unlike most beers, these make your vision 20-20"
15 hours ago

Doone commented on Sydni Moser's group Coffee Break without any Mention of that Idiot
"How Earth will look with current international borders in 250 Million years.…"
20 hours ago

Mrs.B commented on Doone's group Humans of Earth and a World that has a vain, cowardly, lying, vulgar, jabbering blowhard not a Man Scump News
"US - UK...... two peas in a pod."
yesterday

Her story has dropped my tears 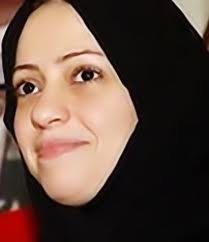 "Samar Badawi" a Saudi activist honoured as 'Woman of Courage' she's the sister of a sister of Raif Badawi I told you about him before.

I came across her difficult story and oh my goodness my tears just dropped!!

On the occasion of International Women's Day...I want to sare some about her..

Samar Badawi was physically abused by her father for 15 years. Her mother died prior to October 2010. In March 2008, she escaped to a women's shelter in Jeddah, the Protection Home. As her male guardian under the male guardianship system, Badawi's father filed a charge of disobedience against her. The Saudi Public Prosecutions and Investigation Bureau dropped the charge.

Badawi's father filed another disobedience charge against her in 2009. Badawi missed some court appearances. In June, Judge Abdullah al-'Uthaim issued a warrant for her arrest. In July, she moved from the women's shelter to her brother's home. A non-judicial investigation by the Protection Home stated that "Badawi's father had beaten and verbally abused her, used drugs, had 14 wives, had exhausted his financial resources, had repeatedly changed jobs, and became friendly with a 'bad group of people.'"

When she went to court for the adhl case on 4 April 2010, she was arrested on the basis of the warrant that had been issued for the disobedience charge. Badawi was held in Briman Prison in Jeddah. On 18 July 2010, Khalid bin Faisal Al Saud, governor of Makkah Province, proposed creating a committee to "reconcile father and daughter by making him promise not to use violence against her, to allow her to mary, and not to file spurious lawsuits [that] he could not prove." Also in July 2010, Badawi's father was found guilty in the adhl case by the Jeddah General Court.

In mid-October 2010, the disobedience case against Badawi remained open, and Badawi's father filed an appeal against the result of the adhl case. On 18 October 2010, the Supreme Judicial Council of Saudi Arabia told Badawi's lawyer Abu al-Khair that it would investigate the legality of both cases. The Human Rights First Society, a Saudi Arabian human rights NGO, described Badawi's imprisonment as "outrageous illegal detention".

Saudi Arabian and international human rights activists campaigned for Badawi to be released. Badawi gave a petition to the National Society for Human Rights, a government-linked human rights NGO, asking not to be returned to her father and "easing her path to marriage".

On 25 October 2010, Badawi was released from prison on the orders of Governor Khalid bin Faisal. An uncle on her father's side became her new male guardian.

On this woman's day this make me realize haow small my own concerns were...

Thanks! I'm stealing it for my discussion too! :-)

I didn't explain the word Adhl "it is the word for the male (mahrem=guardian) who is violating Islamic (Shariah) law by keeping a woman forcibly single.

A timely reminder of all the work that needs to be done to reach equality for women across the globe., This story seems like extracted from the dark Ages. A male guardian? Incredible! What are women? Mentally inferior, childish beings who need a guardian? Her story is truly heartbreaking.