Stephen Brodie commented on Randall Smith's group Just sports stuff.
" Randall Chelsea has beaten the mighty Manchester City in the semi-final of the FA cup to…"
1 hour ago

Mrs.B commented on Sydni Moser's group Coffee Break
"AZ isn't even on offer here for those over 65, & J&J isn't here until the end of…"
8 hours ago

Loren Miller commented on Sydni Moser's group Coffee Break
"NONE of us are Jehovah's Witlesses.  We are NOT proselytizers; we do NOT need the world…"
23 hours ago

Written by: Ayman El Kaissi
In the middle of April, Facebook removed more than six Arabic-speaking atheist pages due to “violations” of Community Standards. This is not the first time that Facebook has censored atheists and freethinkers in the MENA region. In response, the Atheist Alliance – Middle-East and North Africa (AA-MENA) has decided to speak out, demanding that Facebook change the way it addresses violation reports, so as to preserve members’ freedom of speech.
In February 2016, ten of the largest Arabic-speaking atheist groups, with a total of about 100,000 members, have been deactivated for the same reason: heavy reporting campaigns that are organized by “cyber jihadist” fundamentalist Islamic groups, especially for the removal of any anti-Islamic group or page. In such coordinated campaigns, very large numbers of people, and possibly automated scripts, simultaneously file reports falsely claiming that a page, group, or personal account has violated Community Standards.
Representatives of AA-MENA petitioned Mark Zuckerberg demanding that Facebook reactivate the removed groups. The petition was shared on most major atheist groups in the Arab world, the US, and the UK, and it has been supported by many prominent social media activism organizations such as Atheist Alliance International and the Council of Ex-Muslims of Britain.
AA-MENA has adopted #FacebookVSFreeSpeech as the hashtag of its Facebook event, Atheism: Campaigning to regain the right to free speech within Facebook Pages. The campaign’s goal is to rally atheists and freethinkers of the MENA region and to attract the attention of relevant nongovernmental organizations and irreligious social media activists to their cause.
Read more= https://www.the-newshub.com/international/facebook-facing-heavy-cri...

Where is the internet the most open? Where is it the most restricted? Debate the ranking here
• Get the data
• Interactive map of this data 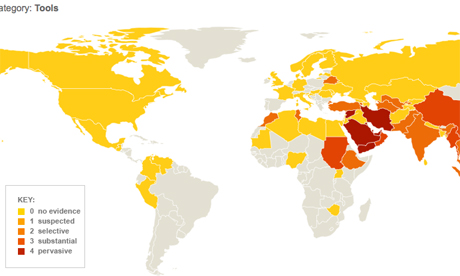 Censorship of internet content can take many forms and ranges from governments blocking the dissemination of political opinion to blacklisting pornographic and pirate websites.

The OpenNet Initiative is a collaboration between three groups – the Citizen Lab at the University of Toronto's Munk school of global af..., Harvard University's Berkman centre for internet & society and the SecDev Group in Ottawa – that investigates internet filtering around the world.

Originally and probably still to a large extent, pornography is both the most widely targeted content and also the one that's justified the most by countries. Most countries, if they're going to engage in internet censorship, start by talking about a broad category of inappropriate content. But what we've found over the last decade is the spectrum of content that's targeted for filtering has grown to include political content and security-related content, especially in authoritarian regimes. The scope and scale of content targeted for filtering has grown.

For each country, the ONI looks at the following four categories of filtering and gives each a rank ranging from "No evidence of filtering" to "Pervasive filtering":

• Political – content opposing the current government or its policies; can also relate to human rights, freedom of expression, minority rights or religious movements
• Social – content that might be perceived as offensive by the general population such as sexuality, gambling, illegal drugs, etc
• Conflict/security – Content related to armed conflicts, border disputes, militant groups and separatist movements
• Internet tools – Tools enabling users to communicate with others, circumvent filtering or that otherwise provide a service. Each country is then classified in terms of consistency – how consistently these topics are filtered across internet service providers – and transparency – how visible the process is by which sites are blocked and whether users are able to view what's on the blacklist.

According to the ONI data, Iran was the worst ranked, with "pervasive" filtering in the political, social and internet tools categories and "substantial" for conflict/security filtering. Tested in 2011, Iran's filtering was rated as being "highly" consistent and had "medium" transparency. Even the country's president isn't immune to the blacklist – it was reported in February this year that censors had blocked access to several news sites supporting Ahmadin.... Worse yet, Iran has proposed a national internet, which would both increase the government's grip over individual connections but also restrict foreign users from accessing Iranian websites. Additionally, individuals are also required to provide personal details to even use a cybercafe.

After Iran was China, which had "pervasive" political and conflict/security filtering, along with "substantial" internet tools and social filtering. In addition to highly consistent filtering, China also had a lower transparency score than Iran. On April 12, Chinese users were cut off from all foreign websites, ..."

Meanwhile, authorities have shut down 42 websites since March this year. "The market for filtering technologies has grown worldwide; what started out as a market primarily oriented to corporate environments in the west has now become a major growing business for government," said Deibert...

More in the above links.

Maybe the State Department asked Facebook to shut down the discussion.

It seems that the U.S. administration - including the State Department doesn't understand what's going on in the Middle East (Muslim/Islamic) areas.

Maybe atheism is bad for the bottom line

I guess Zuckerberg is a liberal only when it suits him. Or is it that the Islamists scare the living daylights out of him.