Loren Miller commented on Loren Miller's group Quote Of The Day
"What harm would it do, if a man told a good strong lie for the sake of the good and for the…"
1 hour ago 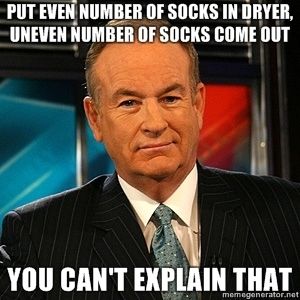 "So, you're an Atheist/Scientist/Rationalist/Skeptic, eh?"

If something similar hasn't happened to you guys yet (assuming you're all 'Atheists/Scientists/Rationalists/Skeptics', which I hope isn't necessarily the case, even if this is an Atheist forum), it will.

It may come as a surprise too. Perhaps you don't expect a loved one or a close friend to sincerely utter that damnable phrase with a face like a poo-proud toddler, but it could be them you have to confront. (Or humour.)

We're all susceptible to irrationality, to assumption, to superstitious inklings and to bad judgement - but it can be helped. The first step: knowing we're flawed. Acceptance of ignorance and predictability. Knowledge of our cognitive habits, limits, and weaknesses... Or something.

Let me explain. I wouldn't like for all of what's written to come across substance-void and colourfully, baselessly assertive. Not all of it.

I say we're 'flawed', because we are. Our judgements are never anything other than context-skewed and inherently 'self-ish' - which is to say that it's extremely hard to really view 'reality' through anyone else's eyes. There is no true empathy, only highly relatable sympathy. We are our brains, and our brains haven't yet figured out a way to literally plug themselves into each other and exchange raw signal. For now, with regards again to 'empathy', for example, we interpret the outward signals of the brains of others - again within the context of our own biases and character - before coming to some sort of a conclusion as to how they're feeling (and how much we care).

What I think I'm trying to say, (very much) more concisely, is this: a person's perception is skewed by their history.

But how does this fit in? What am I trying to get at?

Allow me to clarify.

If someone comes to you saying they've seen a ghost, it's not unfair to assume that they're the sort of person willing to over-entertain the thought that they have in fact seen one, and that, were they a different person (with a different judgement-shaping history), then they'd probably not even be there challenging you on the matter in the first place.

Put it this way: who stands a better chance of attributing hallucination/pareidolia, for instance, to 'ghost' - 'Steve', or 'Vicky the Neuroscientist'?

But the matter is really one of whether or not a person is willing and able to accept the response "I can't 'explain that', I don't have enough information. But it may have been..."

If they can't, I tell them this (emphasis mine):

“I think it's much more interesting to live not knowing than to have answers which might be wrong. I have approximate answers and possible beliefs and different degrees of uncertainty about different things, but I am not absolutely sure of anything and there are many things I don't know anything about, such as whether it means anything to ask why we're here. I don't have to know an answer. I don't feel frightened not knowing things, by being lost in a mysterious universe without any purpose, which is the way it really is as far as I can tell.” - Richard Feynman.

That's not to say I don't enjoy the odd bit of imaginative speculation, it's just that I can entertain a thought without accepting it as fact. It's not that hard.

Not jumping on the 'ghost' bandwagon isn't 'close-minded', it's just cautionary. I'd rather, ultimately, sit on the fence - even if I do, admittedly, lean much more towards favouring a (perhaps presently non-existent) 'natural' explanation over a 'supernatural' one.

Want to change my mind? Show me the evidence. Solid evidence.

And some of the things, in case you were wondering, which don't quite qualify as 'solid evidence' include, to name a few:

(Re-posted from 'The Ramblings of a Young Atheist' by the Author.)

I can't help but agree right back at you...

Evidence is what it takes. And open minds should allow for a reasoned position on what they are skeptic about now.

Thanks for the blog.

Yep, it was an especially rambly one... :P

You mentionned many things in that blog, Carnum;  the thing that rang the most bells with me was that we can never be in each other brain's...