Stephen commented on Doone's group Humans of Earth and a World in which the Most Powerful Person is a Rump News
"That's a wicked assertion Doone. Haha"
40 minutes ago

Doone commented on Doone's group Humans of Earth and a World in which the Most Powerful Person is a Rump News
"A headline appropriate for any day of any year between 1171 and today."
1 hour ago

Stephen commented on Sydni Moser's group Coffee Break without any Mention of that Idiot
"This parody is up there with the best. But beware the F word is…"
6 hours ago

Mrs.B commented on Sydni Moser's group Coffee Break without any Mention of that Idiot
"These parodies are really good, aren't they?"
17 hours ago

Stephen replied to Fingered Moon's discussion We will all die regardless of our beliefs
"I should have known, what with Percy Shelley and Lord Byron being big Ol Atheists. Hahaha "
18 hours ago

Davy replied to Fingered Moon's discussion We will all die regardless of our beliefs
"This is just one mention of him from Percy others also mention the phrase. How wonderful is…"
19 hours ago

Stephen replied to Fingered Moon's discussion We will all die regardless of our beliefs
"Ok Davy. Truly scolded "
20 hours ago

Davy replied to Fingered Moon's discussion We will all die regardless of our beliefs
"Don't you read your poetry from the age of enlightenment. They mention that expression every…"
22 hours ago

Stephen replied to Fingered Moon's discussion We will all die regardless of our beliefs
"Even the insightful Tibetans are only guessing."
22 hours ago

Stephen replied to Fingered Moon's discussion We will all die regardless of our beliefs
"Davy. Sleeps brother where did that term come from?"
22 hours ago

Davy replied to Fingered Moon's discussion We will all die regardless of our beliefs
"Ah! How sleeps brother confounds mortal man."
yesterday

Lutz replied to Fingered Moon's discussion We will all die regardless of our beliefs
"The Tibetans have a saying: when you die you wake up. That is insight."
yesterday

Mrs.B commented on Doone's group Humans of Earth and a World in which the Most Powerful Person is a Rump News
"Aw that's way too cute for a comparison."
yesterday

Stephen commented on Doone's group Humans of Earth and a World in which the Most Powerful Person is a Rump News
"Scump at one of his rallies with his weasel followers."
yesterday

Stephen commented on Doone's group Humans of Earth and a World in which the Most Powerful Person is a Rump News
"Way, way beyond disgusting."
yesterday

Mrs.B commented on Doone's group Humans of Earth and a World in which the Most Powerful Person is a Rump News
"Beyond disgusting!!!!! https://www.bbc.com/news/world-us-canada-52108162 Los Angeles County is…"
yesterday

An Atheist’s Open Letter to Those Praying for His Son

The following open letter may upset you.  You may feel insulted because when it comes to matters of faith, people are more apt to take criticism personally and react defensively when their religious beliefs are brought into question.  Please know it is not my intent to offend, because I’m truly grateful for the offers of support and kind words from family and friends.  But sometimes we’re faced with emotional situations that escalate to a boiling point.  I’m at that point, and it’s time to open a vent.

I’d like to open this letter by acknowledging and thanking those who have shared that they’re praying for my son, who was born prematurely at 27 weeks and since then has resided in our local neonatal intensive care unit.  I realize your intentions are good and that you believe your prayers are helping him grow stronger.  By appealing to a deity that you believe exists and listens to your pleas, you feel you’re offering your support and contributing to my son’s cause in some way.  Because I realize you believe you’re helping, I thank you for doing what you feel will help my son get healthy and strong.

However, my wife and I are atheists.  We don’t believe in the supernatural, and we have good reasons for that, but that’s a topic for another day.  We have placed our trust in science and modern medicine, and we are absolutely amazed at what is possible, thanks to medical research and man’s advanced understanding of biological sciences.  In fact, if we had not placed our trust in medicine, or lived in different times, or belonged to a religion that frowns upon fertility treatments or medically assisted conception, we would not have any children at all.

anks to medical breakthroughs, not miracles, we have two children and get to experience all of the joy, pride, love, and everything else that comes with raising children — all of which would have been replaced with sorrow and heartache had we left it to a god to decide.  We would have had no children, and like many of the religious, would have attempted to rationalize this in an attempt at comforting ourselves by saying it was god’s plan, or that everything happens for a reason.

So should you be appealing to that same supernatural entity to help protect my son — a child that he never wanted to exist?  Does that make sense to you?

There’s a reason that the sick go to hospitals full of doctors and nurses when they need healing, instead of seeking out faith healers or priests, or staying home to pray as their only means of treatment.  It’s because most believers realize that prayer isn’t an effective cure for anything.  Even so, the religious are so quick to thank their god when they or loved ones recover from illnesses rather than show their gratitude to the men and women who made it their life’s work to treat the sick.  Let’s be honest, if an all-knowing, all-pow

erful and all-loving god wants to heal the sick or let them die, what’s your prayer going to do?  Aren’t you just telling him something he already knows?  Aren’t you asking him for something he already knows you want?  Isn’t your god going to do what he wants despite your pleas?  Isn’t that your rationale when your prayers aren’t “answered”… that it was “God’s will”?  So really, what’s the point?  And that’s IF (a monumental IF) a deity exists and you’re praying to the right one, out of the >2000 that have been worshipped throughout human history.

So now you’re thinking, “So what?  What does it hurt that I want to pray for you?”  It’s not that it hurts anything or anyone directly.  Your prayers are your prerogative.  By telling us you’re praying, you’re saying to us that you want to do something to help, and that’s appreciated.  But the avenue of assistance that you’ve chosen is one that we feel is an ineffective one.  You’re telling us, “I’m going to do something for you that has no value to you.  I’m really doing it to make me feel like I’m helping.”  If you want to help a religious person who believes that prayer actually does something, then by all means, pray until you’re hoarse.  But if you want to do something in your power to help a family who places their trust in the doctors, nurses, medicine, and technology that heals the sick and is the reason my son is alive and sleeping in my arms as I type this in the NICU, then do something tangible. Donate to families in need or medical research.  Contact your representatives when a vote comes up that might inhibit scientific advance

ment.  Call a friend or family member who’s in crisis and be a compassionate ear.  Volunteer with a local group without an underlying agenda (like preaching to those benefiting from their good deeds).  There are so many things you can do that are infinitely more effective than talking to a god who already knows what you’re going to say and will do what he wants anyway.

So when you tell me you’re praying for Grayson, I’m going to be gracious and say thank you.  But know this — your gesture does more to make you feel better than it does to comfort me or help my son fight for his life in his incubator.  Everything does not happen for a reason, and my two children are anything but god’s plan.  I feel grateful every single day for mankind’s scientific and medical advancements.

Thank you for allowing me to blow off some steam.  If you’d like to help, I’ve set up a GoFundMe page to help offset Grayson’s hospital costs and any applicable extra care he may need when he finally comes home.  You can find it here: gofundme.com/GraysonFund.

Its strange we Atheists don't pray anymore, but even i find myself with crossed fingers sometimes.

Stupid i know, but you do it without thinking.

The concept of prayer implies an amoral/imoral god: Let's say a child has cancer, so you pray (ask  your god) to save him. Your act of prayer implies that your god is not making an effort to save this child. Clearly, a god who is indifferent to any child's welfare isn't worth praying to. And it's not like phoning 911, which you do to alert the authorities to an emergency, because god is all-knowing—he knows the child is cancer-stricken, he just doesn't give a horse's ass. So prayer is futile.

I am hoping for a happy resolution to your predicament....

I's rediculous to gofundme for medical care. Do you live in a state with a Governor that blocked the Affordable Care Act (ACA)? It's ironic that religionists prevent birth control because "Every Life is Sacred" while denying the basic needs for babies, children, and families.

I wish you good luck with the problem.  Best wishes.

Kevin As Atheists we cant say we are praying for your sons recovery but we do wish you and your family all the best.

One thing your plight shows is that Atheists can be loving and caring family's.

Praying is for the lazy: 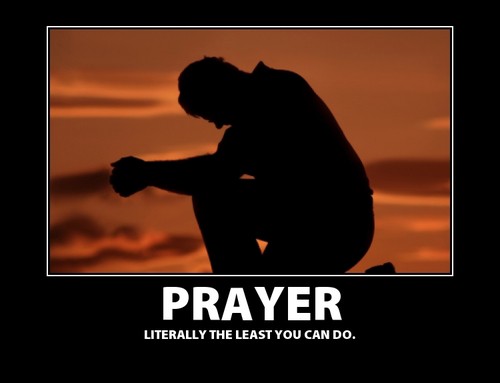