Nice one andy. Christian's are always attempting to use archaeology to prove the existence of Bible characters.

There is ample proof that the Bible is pure fiction. Yet it the 21st century and billions of duped fools still believe in a magic genie in the sky. Unbelievable (literally). 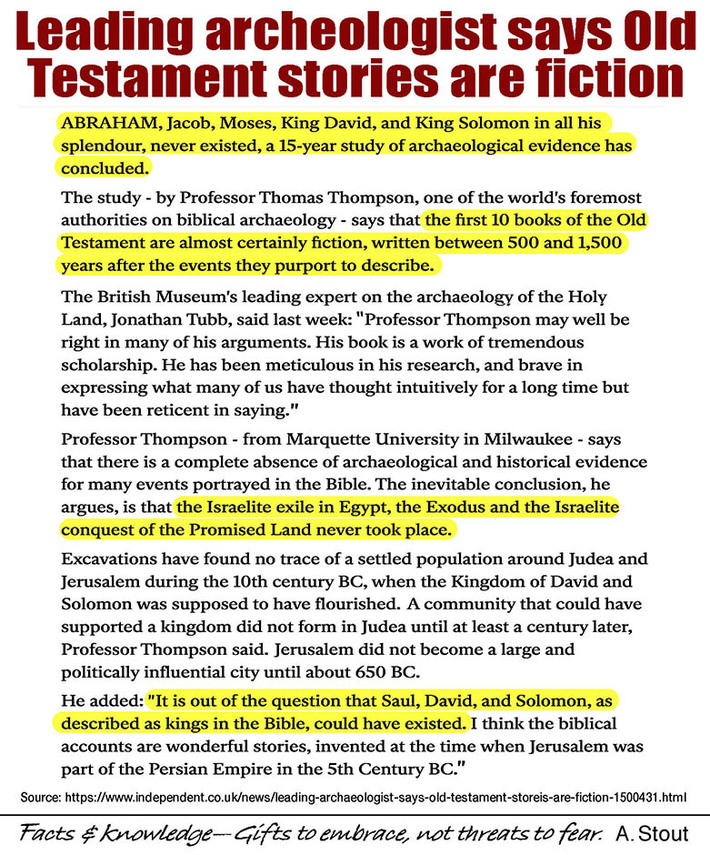 I am 55 ,last year ,after being christian 50 years (baptist ,then penticostal then well nothing in particular ,them married a catholic then I had more dealings with evangelistic church )yes been around a bit

then ,still believing in god I had questions ,I asked the evangistic minister and got answers i was not convinced about so ,as i now have time on my hands decided to look in the bible for answers

I certainly found them , i found the ook was full of contradictions and worse than that the god i had always followed was an evil jelous murdering meglamaniac ,worst of the worst ,then with a little more research on the bible ,it's history who wrote it ect ect and looking into other religions ,where they came from what did they stand for ect ect  none of it made sense ,I then spent about a week as a theist thinking well maybe there is a god but not defined by any religion ,yes that lasted about a week and i was still trying to comvince myself of a god , any god , then i thought for myself , i am a lgical person (i kow it doesnt sound like it )but it finally dawned on me THERE IS NO PROOF OF ANY GOD i have never believed in magic(magic tricks are true)or the supernatural (although various happenings may not all be explainable yet )so for almost a year i have labeled myself as atheist ,i have learnt that all it means is no belief in any god without proof (i'm not holding my breath )it is hard with a catholic wife ,she like so many has been brain washed ,she won't even let me talk to her about why she stays catholic ,although she does see the bible only as a guide to good living ,she won't actually read it .why won't people use their brains and think logically ,I now in my own way just want to explain how they are deluded ,this is not a choice ,you cannot un-learn something once you know it ,so atheism is not really a choice ,i think my dad knew that although we never talked about it because he wanted to be burried in the garden or his body to medical science (bit more to it than that )but he died 2 years ago with no thoughts about god and at 91 new he had lived life how he wanted to .i now have conversations with christians hopeing i can convince them , not to give up their faith ,but to look at it with an open mind so they can make an informed choice about it ,some however i'm afraid wont listen to reason because they have faith some even think the earth is only 6000 years old despite showing them overwhelming evidence that is untrue I do get very frustrated that they just won't concider they could be wrong as I was

i am sorry it has taken me so long to know the truth ,my life would of been so much different had I known 50 years ago , I have lived a life of fear ,of judgment of condeming people of trying to live by the rules of a god described to me ,who didnt exist ,don't get me wrong I am very honist and moral ,because I want to be ,but my previous attitudes cost me my first marriage .Anyway too much talking ,just to say i no longer believe there is a god I am happy contented without any fear and trying more than ever to help my fellow man  sorry if it's a long story ,this is a tiny part of it but at 55 i could write pages i hope this helps just i person