Mrs.B commented on Loren Miller's group Quote Of The Day
"Exactly, & why so many differing ''rules''?"
1 hour ago

Loren Miller commented on Loren Miller's group Quote Of The Day
"If God wants something from me, he would tell me. He wouldn't leave someone else to do this,…"
8 hours ago

RichardtheRaelian left a comment for Brenda
""Happy Birthday!""
14 hours ago

Grinning Cat replied to Loren Miller's discussion Highlights of Cassidy Hutchinson's Testimony to Jan 6th Committee in the group Humans of Earth News
"Two comments from Twitter: "If Republicans take over the House, we're going to get two…"
14 hours ago

Stephen Brodie replied to Loren Miller's discussion Highlights of Cassidy Hutchinson's Testimony to Jan 6th Committee in the group Humans of Earth News
"A spoilt brat with the power to nuke us all. "
16 hours ago

Mrs.B commented on Loren Miller's group Quote Of The Day
"Disgust for the country is only growing. Back to the back alley abortions, self abortions,…"
yesterday

Loren Miller commented on Loren Miller's group Quote Of The Day
"Obviously, without the right of women and men to make decisions about our own bodies, there is no…"
yesterday

Chris B replied to Loren Miller's discussion Life Is Precious . . . Unless It's Not (Betty Bowers) in the group Freethought and Funny Bones
"!"
yesterday

The Ukraine-Russia Struggle Goes Way Back

Earlier, ahead of his formal order for the invasion of Ukraine, Russian president Vladimir Putin gave one of his most aggressive speeches yet. He denied Ukraine's right to exist; pushed false narratives that the post-2014 Ukrainian government is illegitimate and subscribes to a radical nationalist ideology; and portrayed Ukraine as an aggressive state willing to take back the Russia-occupied Donbas by military means. All these allegations were a pretext for Putin to recognize the "independence" of the so-called Donetsk and Luhansk "people's republics" and justify the invasion of Ukrainian territory by Russian troops. What's more, Putin accused Ukraine of committing "genocide" in Russia-occupied Donbas — failing to explain how exactly that could happen in territories Ukraine has had no access to for eight years.

This belligerent rhetoric is explained by one simple fact.

To Putin, a democratic Ukraine represents an existential threat to his new Russian imperialism — a political model centred around the cult of the state and new Leviathan, rehabilitating Stalinism in domestic and foreign politics. This is why Russia has been so desperate to bring Ukraine back into its sphere of influence.

The country's struggle against Russian authoritarianism is not new. In fact, Ukraine has been developing a political culture centered around rights and against tyranny for centuries. In the Middle Ages, Kyivan Rus' was a pluralistic political entity organized around multiple centers of influence of city-states, without a single tyrannical ruler. In the early modern period, the Ukrainian Cossack polity formed a model of republican politics and contractual idea of the state different from the rising Muscovite authoritarianism. In the 19th century, Ukrainian intellectuals developed an idea of bottom-up politics focused on autonomous communities (hromadas), against tsarist autocracy. And in the 20th century, the Ukrainian version of socialism was oriented towards European models of cooperative economics and emancipation of peasants and workers, rather than the Russian model of a "dictatorship of the proletariat."

Read more at this link

The Ukraine-Russia Struggle Goes Way Back

Donald Trump's adoration for Putin is revolting. In spite of this traitorous inclination, his base of duped right-wing followers still support him. I would only hope that Putin's hateful, unprovoked act of aggression against the Ukraine might change the minds of Trump supporters and make them realize that a person, who strives to be dictator of the USA, is maybe not an ideal candidate to be president. We can only hope! 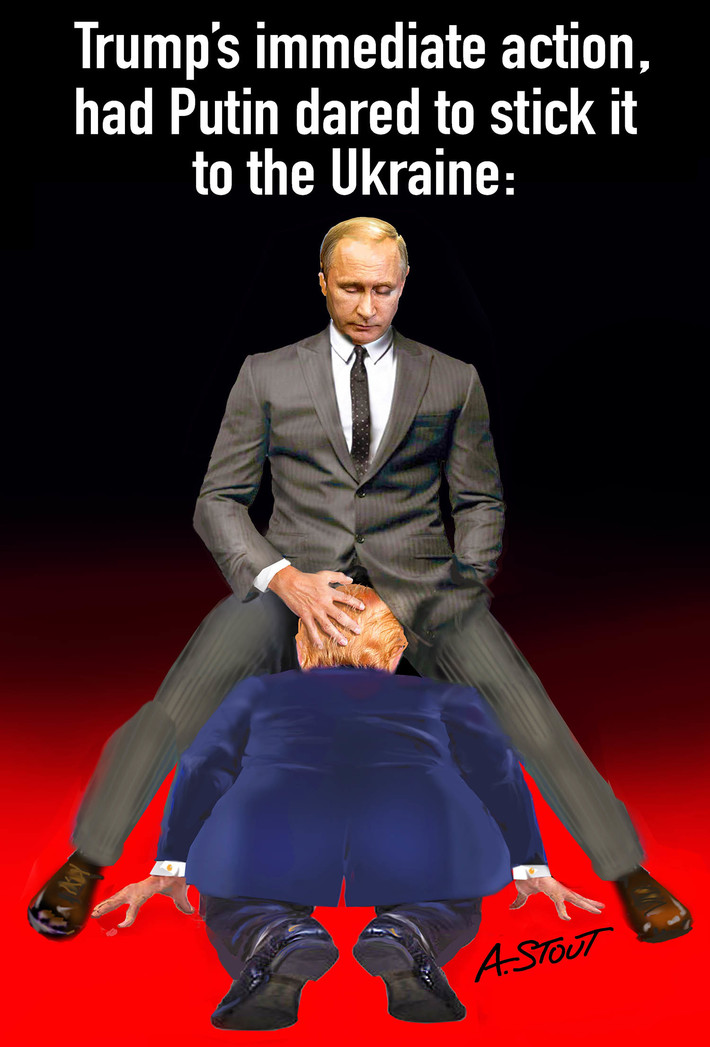 Russia’s war against Ukraine was greatly enabled by the Russian Orthodox Church, and its hierarchs are currently cheering on Putin’s invasion. Moreover, the need to “protect” the Moscow Patriarchate in Ukraine was one of the several false pretexts for the devastating attack on Ukraine. How did this happen and what will be the future of the Russian church, including its structures in Ukraine? Religious expert Viktor Yelenskyi explains.
The double headed eagle the Russian Emblem is because one head represents the civil head and the other represents the religious head.
you can read the article at this link. 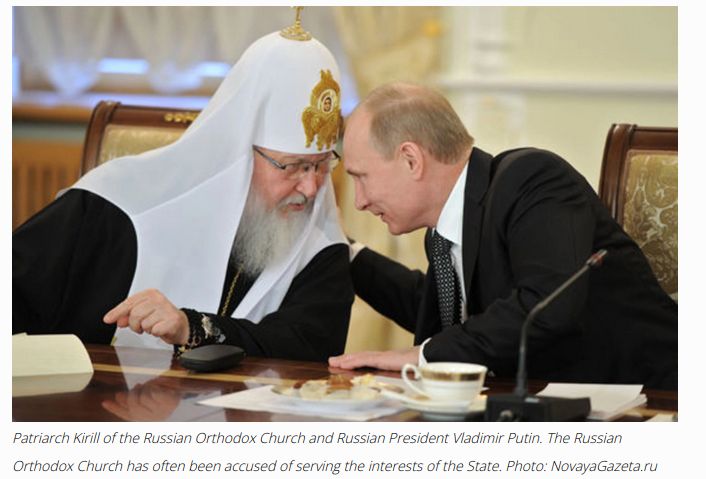 Russia has once again become a priest-ridden country. The Orthodox Church has anointed Putin as the latest Russian strong man. Makes me sick.