Mrs.B commented on Doone's group Humans of Earth News
"BYEDON!!!! MR. PRESIDENT Joe Biden is in the house!"
6 hours ago

Mrs.B commented on Loren Miller's group Quote Of The Day
"Looks spot on to me."
6 hours ago

Grinning Cat commented on Doone's group Humans of Earth News
"Listening to President Biden's inaugural speech!... and celebrating "the end of an…"
8 hours ago

Onyango Makagutu commented on Doone's group Humans of Earth News
"His legacy will remain for a long time and this is what should worry you. We hope the inauguration…"
11 hours ago

Doone commented on Doone's group Humans of Earth News
"He’s gone! Our long national nightmare is over.  "
11 hours ago

Onyango Makagutu commented on Loren Miller's group Quote Of The Day
"Why, I agree with Barker too"
11 hours ago

Loren Miller commented on Loren Miller's group Quote Of The Day
"I think that God that we have created and allowed to shape our culture through, essentially…"
13 hours ago

Stephen Brodie commented on Loren Miller's group Quote Of The Day
"Onyango a stone is a stone that's reason enough. Joan, I think Engels was talking…"
13 hours ago

Terence Meaden commented on Terence Meaden's group "Q--is for quare, queries and quotes,"
"Joan, I am thinking of using your comment in the forthcoming book: “And like language, a…"
14 hours ago

Terence Meaden commented on Terence Meaden's group "Q--is for quare, queries and quotes,"
"Re: the original meaning of quare, over 2000 years ago. Hmmm, Joan, I'm glad you raised this…"
14 hours ago

Joan Denoo commented on Loren Miller's group Quote Of The Day
"Onyango Makagutu, I like the way you worded the meaning of existence. While trying to find…"
15 hours ago

Joan Denoo commented on Terence Meaden's group "Q--is for quare, queries and quotes,"
"It wasn't until I was teaching Life Skills in our prison system in Spokane that I ran across…"
17 hours ago

Joan Denoo commented on Terence Meaden's group "Q--is for quare, queries and quotes,"
"Terry, I like your quote from Steve Bruce:  "Christian is not ‘natural’; it…"
17 hours ago

Joan Denoo commented on Terence Meaden's group "Q--is for quare, queries and quotes,"
"Terry, I have not seen or heard this word used before;   "quare:" n. An…"
18 hours ago

Mrs.B commented on Adriana's group Freethought and Funny Bones
"That was really on point."
18 hours ago

Mrs.B commented on Julien's group The Music Box
18 hours ago

From the Fair Education Foundation, Inc.: "An electromagnet and computerized sensor hidden in its

display stand cause the Earth to levitate motionlessly in the air."

Could God have engineered something like that for the real Earth?

The Bible and all real evidence confirms that this is precisely what He did, and indeed:

The Earth is not rotating...nor is it going around the sun.

>>>The universe is not one ten trillionth the size we are told./p>

The whole scheme from Copernicanism to Big Bangism is a factless lie.

Those lies have planted the Truth-killing virus of evolutionism

in every aspect of man’s "knowledge" about the Universe, the

This guy's 'foundation' is his own befuddlement at the phenomenon of magnetism. He begs the question, can ignorance be quantified?

A small chunk of his massive reviews page on his book: 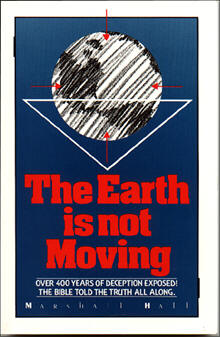 "...something of a classic. I found the style extremely entertaining and sometimes hilarious... It was just the style which would give the book a wide audience and open the eyes of a lot of people."
Martin Gwynne, Essayist, London, England

"I will present your book in our review... I appreciate it very much."
Yves Nourissat, Dijon, France

"I found it to be chuck full of fresh ideas.... Your best coverage was of relativity and Einstein. That stuff is riddled with flaws and you made the most of them."
R.G. Elmendorf, Engineer, Pitt.PA

It's another Armageddon Cult,all about trumpets:

By the time Jesus' coming Truth Blitzkrieg has divided the world's populations into overt Satan worshipers and those who get on God's side, the Fall of Babylon time frame is over.  Other time frames which are part of the Beast's overall 3 ½ years will have begun.

Wasting no time, the 1st Trumpet Plague begins and announces the progression of the 7 Trumpet Plagues which bracket The Beast's 3 ½ year reign. With that in mind we can begin investigating a series of Biblically predetermined time frames which culminate in Armageddon which is the very last day of the 7th vial/bowl Trumpet of the 7th  Trumpet.

And (why am I not surprised?) ...there's a US Republican politician, Benjamin Bridges, Ga who was circulating memos throughout the Georgia legislature to the effect that evolution and heliocentrism were untrue.

"Indisputable evidence — long hidden but now available to everyone — demonstrates conclusively that so-called 'secular evolution science' is the Big-Bang 15-billion-year alternate 'creation scenario' of the Pharisee Religion... This scenario is derived concept-for-concept fromRabbinic writings in the mystic 'holy book' Kabbala dating back at least two millennia."[3]

It amazes me that crackpot notions like these can have so much reach. Education sure is lacking in certain parts.

I guess this Big Bangism is something of a mystery. I guess it's too much elementary for him my dear Watson.