Randall Smith commented on Hope's group Imagine No Organized Religion
"Thanks for sharing some of your memories, Joan, albeit sometimes not so "fond"…"
21 minutes ago

Joan Denoo commented on Hope's group Imagine No Organized Religion
"You make an excellent point, Mrs. B. "
4 hours ago

Joan Denoo commented on Loren Miller's group Quote Of The Day
"I did a DuckDuckGo search for Carlespie Mary Alice McKinney and found this:  The Secret…"
5 hours ago

Mrs.B commented on Hope's group Imagine No Organized Religion
"No, glorifying war is not something I willingly want to see. The way humans treat fellow humans is…"
6 hours ago

Joan Denoo commented on Hope's group Imagine No Organized Religion
"Chris B., I have 85 years of memories and the spirit of adventure. Couple these with a profound…"
6 hours ago

Joan Denoo commented on Hope's group Imagine No Organized Religion
"Obviously, Religion, gods, dogmas, and litanies grow out of the imagination of human beings. The…"
6 hours ago

Joan Denoo commented on Hope's group Imagine No Organized Religion
"Loren, I just now watch the MASH video you included and could not help but start crying. The year…"
7 hours ago

Chris B commented on Hope's group Imagine No Organized Religion
"I love your memories, Joan!"
8 hours ago

Chris B commented on Loren Miller's group Quote Of The Day
"Poor fox..."
8 hours ago

Doone commented on A Former Member's group Animal | Vegetable | Mineral | Fungus
"Artist's impression of a female Maiacetus and her newborn pup. Also known as the 'walking…"
11 hours ago

Mrs.B commented on Hope's group Imagine No Organized Religion
"Which is why I don't care for programs concerning war....it's not entertainment to me."
12 hours ago

Joan Denoo commented on Hope's group Imagine No Organized Religion
"In 1966, I think it was, Don, my dentist husband, who was in Viet Nam in a battlefield hospital…"
13 hours ago

Have you ever argued with a conspiracy theorist? It's very frustrating. Evidence to the contrary is dismissed as fraudulent—even as “part of the conspiracy”—and protestations about implausibility are countered with a smugly raised eyebrow. Science and reason cannot penetrate this armour of arrogant dismissal: those making this “conspiratorial move” are typically regarded as the bold truth-seekers challenging the establishment, the rest of us are “sheeple” at best, venal at worst. 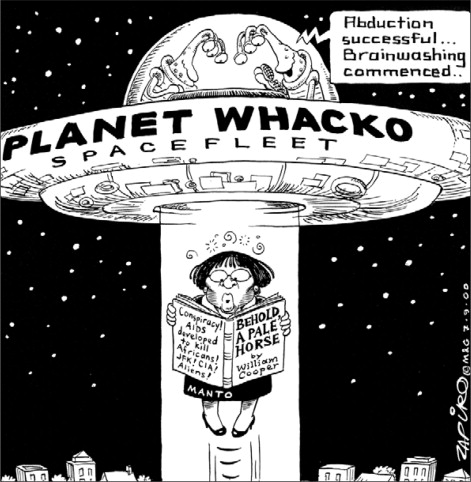 Such is the position in which scientists, clinicians, and AIDS activists find themselves when confronting AIDS conspiracy theories. These theories range from the claim that HIV is a man-made biological weapon to the “AIDS denialist” beliefs that HIV is harmless and antiretroviral drugs toxic. All make a conspiratorial move against HIV science by claiming it has been irredeemably corrupted by the pharmaceutical industry, possibly in league with shadowy political forces and opportunistic researchers.

Anthropologists and social psychologists typically interpret conspiracy theories as responses to powerlessness—as ways of making sense of the bewildering social, economic, and political context of modern life. But not all conspiracy believers are powerless. Most infamously, in the early 21st century, the then South African President Thabo Mbeki and his Health Minister, Manto Tshabalala-Msimang, made conspiratorial moves against HIV science whilst blocking the use of antiretroviral drugs for prevention of mother-to-child transmission (PMTCT) of HIV and antiretroviral therapy. It took a constitutional court case brought by the Treatment Action Campaign (TAC) to force Tshabalala-Msimang to initiate a national PMTCT programme, and a mass civil disobedience campaign before the cabinet over-ruled Mbeki and agreed to an antiretroviral therapy rollout. Over a third of a million people are estimated to have died unnecessarily as a consequence of the delayed PMTCT and antiretroviral therapy programmes in South Africa.

In 2000, Mbeki invited leading AIDS denialists, notably Peter Duesberg, onto an advisory panel to “debate” with HIV scientists and clinicians. This was, predictably, unproductive since no agreement could be had on what evidence was credible. The AIDS denialists recommended that HIV testing be halted and that immune deficiency be treated with a range of alternative healing approaches, including massage therapy, nutrition, music therapy, yoga, and homoeopathy. Two of the AIDS denialists on Mbeki's panel were subsequently involved in promoting quack cures: Roberto Giraldo became Tshabalala-Msimang's adviser on nutritional remedies; and David Rasnick assisted the Rath Health Foundation with its “clinical trials” in which patients on antiretroviral therapy were taken off treatment and put on high-dose vitamins instead. Several people died before successful legal action by the TAC brought this to a halt.

This symbiotic connection between AIDS denialism and alternative healing was facilitated by a shared conspiratorial move against HIV science and has had powerful community-building effects. AIDS denialism gained social traction through four symbolically and organisationally important roles: the “hero scientists” who provide a patina of scientific legitimacy for the movement; the “cultropreneurs” who offer fake cures in the place of antiretroviral therapy; the HIV-positive “living icons” who seemingly provide proof of concept by appearing to live healthily without antiretroviral therapy; and the “praise singers”, such as sympathetic journalists and film-makers, who publicise the movement. When Mbeki surfed the internet about AIDS, he came across more than just a set of bad ideas; he encountered a community in which conspiracy theory fostered new forms of identity (bold truth-seeker) and social solidarity (we, the oppressed).

One of the people Mbeki met was Christine Maggiore, an HIV-positive living icon for AIDS denialism who founded Alive and Well, a Californian organisation that campaigned against PMTCT. When she was pregnant, in 2002, Maggiore was featured on the cover of the magazine Mothering with a red circle slash symbol over the letters “AZT” emblazoned across her abdomen. Tragically, her baby later died of AIDS-related infections. Maggiore, however, remained opposed to the science of HIV pathogenesis and treatment, dying in 2008 of bilateral bronchial pneumonia and disseminated herpes viral infection. Her stance speaks volumes about the passion and sincerity with which AIDS denialist beliefs can be embraced and to the powerful social and psychological forces at work.

In the early days of the South African struggle for antiretrovirals, I approached the problem as an economist. In an affidavit for the TAC case, I argued that the costs of a PMTCT programme were substantially lower than that of treating the many children who would be born HIV-positive in its absence. Later, after calculating that rolling out antiretroviral therapy would save lives but still require a net increase in resources for health, I speculated that Mbeki's bizarre opposition to HIV science might be a political smoke-screen to disguise the fact that he and the Finance Minister did not want to raise taxes or redirect government spending to assist the many HIV-positive unemployed people too poor to obtain antiretroviral therapy through the private sector. This prompted a visit from a Treasury official; the Finance Minister, he told me, was not pleased. He believed sufficient resources had been allocated to the Health Minister for antiretroviral drugs—the problem was her failure to spend it.

Many commentators suggest that Mbeki and Tshabalala-Msimang were giving voice to African suspicions about “western” medicine and resisting racist constructions of the African AIDS epidemic. But while these elements are evident in their speeches and writings, the conspiratorial moves they made against HIV science were more complex than this. Mbeki was suspicious of HIV science, not the entire body of “western” science, and he went to the proverbial wall in defence of white, foreign AIDS denialists. His was no simple “African voice”. Tshabalala-Msimang crossed even greater ideological divides when she circulated extracts from a book called Behold a Pale Horse by the American conspiracy theorist William Cooper, who believed that the AIDS epidemic was created by a conspiracy involving the US Government working in cahoots with space aliens, Jews, Freemasons, and others. Already influential in US militia and UFO circles, Behold a Pale Horse was provided an influential airing in the highest reaches of the South African Government and was widely discussed in the media. Cooper was a right-wing libertarian who believed that only those who could see the inter-planetary conspiracy for what it was and were prepared to resist the state in all forms, could genuinely be free. He was declared a fugitive by the US Marshalls Service and eventually shot in a gun-fight with sheriffs.

This link between Tshabalala-Msimang and Cooper illustrates how the creation and propagation of AIDS-origin conspiracy theories can entail connections, if only in the sphere of ideas, between those with very different views of the world and places in it. That a health minister in a middle-income country committed to using the power of the state for economic development was promoting the ideas of an anti-state US militia leader is strange indeed. That she had dedicated her life to the anti-apartheid movement whereas he reportedly supported the Ku Klux Klan, makes it all the more so.

History and cultural context clearly matter for how conspiracy theories resonate and gain social traction. South African survey data among young adults in Cape Town show that those who believe in evil forces (witchcraft) are three times more likely to hold AIDS conspiracy beliefs than those who do not. But the power of leaders—both political and from within civil society—to influence beliefs is also evident: it is estimated that trusting Tshabalala-Msimang more than quadrupled the odds of endorsing AIDS conspiracy beliefs, whereas knowledge of the TAC halved them. Fighting AIDS conspiracy beliefs was hard, but certainly not impossible.

AIDS policy has improved dramatically in South Africa in the post-Mbeki era. Yet suspicions about the role of pharmaceutical companies remain and are easily recruited into new conspiracy theories—for example, that a cure is available but kept hidden to boost the sales of life-long antiretroviral therapy. The TAC continues its excellent “treatment literacy” programmes, but is doing so in a much tougher funding environment. Not only has the global economic slowdown reduced funding for all non-governmental organisations, including the TAC, but it has become a victim of its own success: precisely because AIDS policy has improved, funders no longer view TAC as a priority. But the battle for a scientific approach to AIDS is an ongoing one, fought both at national and individual levels. Without a strong TAC in South Africa, AIDS conspiracy beliefs might again gain ground and at the cost of HIV prevention and treatment.

The term "Evil" should always throw up warning flags. A lot of people believe in evil forces and demonic possession. People who believe such things are not sane.