Religion as Flocking and Schooling Behavior 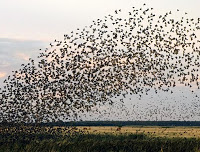 Many animals perform aspects of herding behavior in order to maintain group stability and sustain genetic diversity within their species. Bees swarm, fish and water mammals swim in schools, birds flock, carnivorous animals hunt in packs, and bovines run in herds. But Why? Why is it that so many types and forms of animals instinctively mass to ensure the survival of the group?

First of course, massing is a form of protection. The idea that there is safety in numbers is fairly accurate. So, to predators, a large mass

coming towards them can stop an attack rather than one or a few individual animals moving into proximity. In small numbers, the prey is the hunted and they are usually dispatched with abandon by the hunter. But en masse, the small and defenseless can look, think, act and move as one large organic being. Pack behavior also protects the smaller, older and younger members of a species, while simultaneously transferring behavior between individuals - at least those behaviors which are not already instinctual.

But what about humans, do we swarm? We certainly move in packs, tribes, bands, and within societies. And in doing this we transfer both local and global culture through acts of communication and technology. So are the tools of human culture nothing more than a progressive adaptation developed so that when humans move in packs, we are attempting to pass on our genes so that selected members of our species can survive?

If so and if survival is so important on an instinctual level, the concept of separating people because of phenotype, language, culture, religion or ethnicity is essentially then a genetic absurdity. However we do define local and global groups; sub-cultures and forms of “us” and “them” in our lives. Homo- and Heterogeneous groups are perhaps artificial and subjective ways of defining and sharing specific cultural aspects and life ways, but historically the ideas or truth when we assume a god concept or accept spiritual belief appears to inhibit forming one humanistic cultural construct.

Organized religion may at times be the highest form of collectivism, a movement of people in swarming and massing ritualized behavior to act as one organic entity. But ironically faith can also perform the opposite function in terms of inhibiting formal collective culture. Almost every religion, when practiced, either wants to remain separate from the larger group (think the Amish or Judaism), or proselytizes and demands acceptance of a specific god in order for an individual or clan to be fully accepted into the hive (think Islam or many sects of Christianity from Jesuit missionaries to the Jehovah Witness or Mormon knocking on your door). Neither is very humanistic in their approach to consensus building.