How to scare someone who knows no fear

The amygdala is a small area of our brain that mediates fear responses. People with a 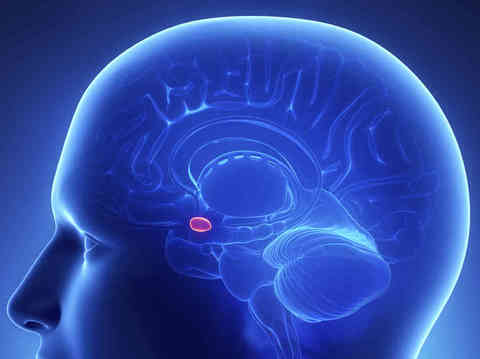 damaged amygdala cannot experience fear. There is an extremely rare genetic condition, Urbach-Wiethe disease, in which the amygdala hardens and shrivels up. Patients who suffer from this disease can watch horror movies, look at spiders and snakes, and other scary stuff, without feeling any fear. So when SM, a 44-year old woman suffering from Urbach-Wiethe disease, was told she was going to inhale a non-lethal dose of CO2, known to elicit a strong fear reaction in people and mice with intact amygdalas, she was not scared. However, within seconds of breathing in the CO2 mixture, she panicked and cried out, overwhelmed by feeling of suffocation, just like people with a normal amygdala. SM had not experienced fear since she was a child, when her amygdala became non-functional as a consequence of her disease. Neuroscientists just published the results of these experiments in Nature Neuroscience. They used the CO2 inhalation test on SM, two other patients with the same disease, and 12 healthy control volunteers.  They were surprised to find that the patients with amygdala-damage were in fact, more panicky and fearful than the controls, after inhaling CO2, though the healthy volunteers were scared beforehand. These experiments clearly show that the amygdala does not mediate all fear responses, and that panic (a primal response when survival is at stake) and fear may be two separate responses mediated by different brain regions. The neuroscientists plan to use functional imaging to pinpoint the brain regions involved in the amygdala-independent panic response; they speculate that these may include the brainstem, diencephalon and the insular cortex, regions that mediate bodily awareness. The research can open new roads to understand and treat panic attacks and other anxiety-related disorders.


Feelings of terror did not involve the brain's 'fear centre'. Intense fear is commonly believed to require a reaction by the brain structure called the amygdala, but that may not always be the case.

People seem to have more than one way to work themselves into a panic. Contrary to a long-standing assumption of neuroscientists, humans can experience fear even when they lack the brain structure widely regarded as the brain's 'fear centre'.

Many studies on animals over the years have shown that the amygdala, a small, almond-shaped structure located deep inside the brain, is crucial for the fear response. This finding has been confirmed in studies of humans.

Justin Feinstein at the University of Iowa in Iowa City and his colleagues have now found that in certain situations the fear response may occur even in people who do not have a working amygdala. Their work is published online today inNature Neuroscience1.

Feinstein and his team had been studying a 44-year-old woman with an extremely rare genetic condition called Urbach-Wiethe disease, in which the amygdala hardens and shrivels up2. The woman, known as S.M., showed only minimal levels of fear when shown clips from horror films and when exposed to large spiders, snakes and other things that many people find terrifying.

One situation in which the amygdala triggers fear and panic attacks is when it detects unusually high concentrations of carbon dioxide — a sign of possible suffocation — by sensing increased acidity in the blood. This may occur even if CO2 is inhaled in concentrations that are not lethal. Feinstein and his colleagues therefore predicted that patients with damaged amygdalas would not feel fear after inhaling the gas.

Here is another good article about this research:

Human brain is divided on fear and panic

When doctors at the University of Iowa prepared a patient to inhale a panic-inducing dose of carbon dioxide, she was fearless. But within seconds of breathing in the mixture, she cried for help, overwhelmed by the sensation that she was suffocating.

The patient, a woman in her 40s known as SM, has an extremely rare condition called Urbach-Wiethe disease that has caused extensive damage to the amygdala, an almond-shaped area in the brain long known for its role in fear. She had not felt terror since getting the disease when she was an adolescent.

In a paper published online Feb. 3 in the journal Nature Neuroscience, the UI team provides proof that the amygdala is not the only gatekeeper of fear in the human mind. Other regions—such as the brainstem, diencephalon, or insular cortex—could sense the body’s most primal inner signals of danger when basic survival is threatened.

“This research says panic, or intense fear, is induced somewhere outside of the amygdala,” says John Wemmie, associate professor of psychiatry at the UI and senior author on the paper. “This could be a fundamental part of explaining why people have panic attacks.”

If true, the newly discovered pathways could become targets for treating panic attacks, post-traumatic stress syndrome, and other anxiety-related conditions caused by a swirl of internal emotional triggers.

“Our findings can shed light on how a normal response can lead to a disorder, and also on potential treatment mechanisms,” says Daniel Tranel, professor of neurology and psychology at the UI and a corresponding author on the paper.

Maybe each cell of our body is ancestrally allergic to CO2 =)

I have experienced panic and anxiety attacks and I'm also frightened of certain things, heights for example.  For me, there is no comparison between the two, fear and panic or anxiety attacks so I now can understand that they come from different regions of the brain, maybe kind of connected. Panic attacks are much worse than anxiety attacks and come literally from nowhere;  you feel like you are going to have a heart attack but not is such the case:  you have to lay down and stand still for maybe 10 to 20 minutes until it goes away.  I've never been able to figure out the reasons behind the panic attacks.

As for anxiety attacks which I have also had, you can usually figure out why they happened. In anxiety attacks you can start shaking, in my cases my hands, and have no control over it whatsoever.

I had a colleague who suffered from panic attacks and she described it in the same way as you, Marianne, to be quite sudden and seemingly coming out of nowhere, as if she was about to have a heart attack. The reasons are completely unknown but she was treated with drugs and is now better.

I'm  also taking medication for it and it doesn't  happen anymore.  I'm unsure which part of my brain is affected by this.

I don't think the brain part is known. They are still investigating.