Joan Denoo commented on Adriana's group Freethought and Funny Bones
"Patricia, you come up with the most hilarious stories! What a great laugh this one is. "
1 hour ago

Joan Denoo commented on Loren Miller's group Quote Of The Day
"Grinning Cat, I like your comment on astrology.  "
2 hours ago

Joan Denoo commented on Loren Miller's group Quote Of The Day
"I like the word, "atheist."  I am proud of being an atheist and am happy to share my…"
2 hours ago

Mrs.B commented on Loren Miller's group Quote Of The Day
"''Make me a sandwich'' is still one oi the best lines!"
3 hours ago

Joan Denoo commented on Loren Miller's group Quote Of The Day
"Did the video come through? I don't see it on my comment. Here is the link in case my first…"
3 hours ago

Joan Denoo commented on Loren Miller's group Quote Of The Day
""I'll pray for you!" I realize this is an old video, but I laugh every time I hear…"
3 hours ago

Joan Denoo commented on Terence Meaden's group "Q--is for quare, queries and quotes,"
"Terry, do you know the publishing date? And, who is your publisher?  I feel honored that you…"
4 hours ago

Stephen Brodie commented on Adriana's group Freethought and Funny Bones
" MrsB I loved the Miss Beatrice story. Thanks."
7 hours ago

Idaho Spud commented on Adriana's group Freethought and Funny Bones
"That was a smile-inducer.  "
9 hours ago

Mrs.B commented on Adriana's group Freethought and Funny Bones
"Miss Beatrice, the church organist, was in her eighties and had never been married. She was admired…"
14 hours ago

Grinning Cat commented on Loren Miller's group Quote Of The Day
"On astrology:"
16 hours ago

Grinning Cat commented on Loren Miller's group Quote Of The Day
"Loren, I agree that we need the word "atheism" as long as it's not a corollary of…"
16 hours ago

Loren Miller commented on Loren Miller's group Quote Of The Day
"Atheism is not a philosophy; it is not even a view of the world; it is simply an admission of the…"
21 hours ago

Joan Denoo commented on Loren Miller's group Quote Of The Day
"Chris B, thanks for the Martin Luther King, Jr. quote!"
22 hours ago

EDIT: So they have done it!
Curiosity is now open for business on Mars. Humanity has successfully put a semi-autonomous robot jam-packed with high-res sensors and fancy software on a tiny rock fourteen light-minutes away.
That's an impressive demonstration of the power of scientific predictions. I don't know how long is the NASA list of things that could go wrong but I bet it is astronomical.
Now the coming weeks will be critical. Before going anywhere Curiosity will test its subsystems and deploy its paraphernalia. That's another gazillion things that could go wrong. But these people are good - think the Voyagers, Cassini, Apollo 11 - pretty much the best that we have. 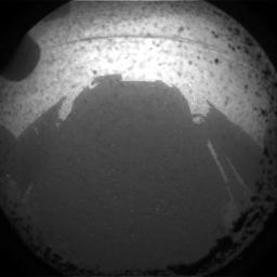 Something very exciting is going to happen tonight. The SUV-sized NASA rover curiosity is to touch down on Mars at 1:30 AM (Florida time.) If it makes it in one piece to the surface - an incredible feat in itself - a set of fascinating experiments will begin with the robotic chemical lab that's on board.

"After flying more than eight months and 350 million miles since launch, the Mars Science Laboratory spacecraft is now right on target to fly through the eye of the needle that is our target at the top of the Mars atmosphere," said Mission Manager Arthur Amador of NASA's Jet Propulsion Laboratory, Pasadena, Calif. This artist's scoreboard displays a fictional game between Mars and Earth, with Mars in the lead. It refers to the success rate of sending missions to Mars, both as orbiters and landers. Of the previous 39 missions targeted for Mars from around the world, 15 have been successes and 24 failures. For baseball fans, that's a batting average of .385. The United States has had 13 successes out of 18 attempts, or a "batting average" of .722. NASA's Curiosity rover, set to land on the Red Planet the evening of Aug. 5, 2012 PDT (morning of Aug. 6 EDT), will mark the United States' 19th attempt to tackle the challenge of Mars, and the world's 40th attempt. (Credit: NASA/JPL-Caltech)

Unusual form of locomotion! But interesting.

Not sure it solves any problem =)

NOT a popular mountain biking destination in Utah

Posted about 4 hours ago

For scale, an annotated version of the figure highlights a dark rock that is approximately the same size as Curiosity. The pointy mound in the center of the image, looming above the rover-sized rock, is about 1,000 feet (300 meters) across and 300 feet (100 meters) high.

NOT a sand dune in northern Africa

This image taken by the Mast Camera (MastCam) on NASA's Curiosity rover highlights the interesting geology of Mount Sharp, a mountain inside Gale Crater, where the rover landed.

NOT a volcano in Hawaii

The gravelly area around Curiosity's landing site is visible in the foreground. Farther away, about a third of the way up from the bottom of the image, the terrain falls off into a depression (a swale). Beyond the swale, in the middle of the image, is the boulder-strewn, red-brown rim of a moderately-sized impact crater. Father off in the distance, there are dark dunes and then the layered rock at the base of Mount Sharp. Some haze obscures the view, but the top ridge, depicted in this image, is 10 miles (16.2 kilometers) away.

NOT a canyon park in Arizona

It produces pictures are so clear you can almost smell the air:

Like a hospital or scientific laboratory, Mars as we can imagine it today may be relatively sterile, harshly lit, and at the same time, occasionally peppered by odd colors, thinly pitched metal sounds and memorable chemical smells.

So little time on the surface but yet Curiosity is making astounding finds on Mars.

PASADENA, Calif. -- NASA's Curiosity rover mission has found evidence a stream once ran vigorously across the area on Mars where the rover is driving. There is earlier evidence for the presence of water on Mars, but this evidence -- images of rocks containing ancient streambed gravels -- is the first of its kind.

Scientists are studying the images of stones cemented into a layer of conglomerate rock. The sizes and shapes of stones offer clues to the speed and distance of a long-ago stream's flow.

Get the full story and photos Curiosty @ NASA 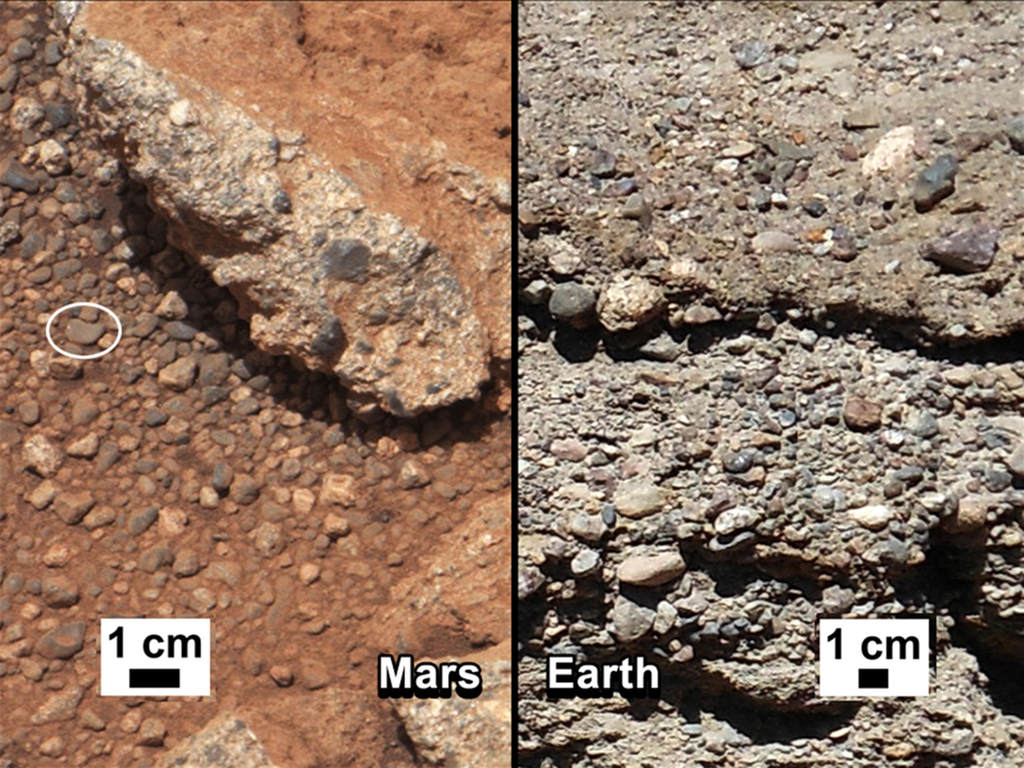 This discovery highlights one possible future for our planet: when all the water'll be gone...