Loren Miller commented on Loren Miller's group Quote Of The Day
"The whole thing [religion] is so patently infantile, so foreign to reality, that to anyone with a…"
12 hours ago

RichardtheRaelian left a comment for Ayumimori
""Happy Birthday!""
20 hours ago

Is Our 21st-Century Technology Too Primitive to Detect Advanced Extraterrestrial Life?

From the Daily Galaxy.

Is Our 21st-Century Technology Too Primitive to Detect Advanced Ext...

Some of the world's leading astronomers -- including Great Britain's astronomer royal, Sir Martin Rees -- believe aliens, rather than using different radio waves or visible light to signal, may be using an entirely different communication medium such as ghostly neutrinos or with gravitational waves (ripples in the fabric of space-time) or using communication mechanisms we cannot begin to fathom.

“The fact that we have not yet found the slightest evidence for life -- much less intelligence -- beyond this Earth," said Arthur C. Clarke, "does not surprise or disappoint me in the least. Our technology must still be laughably primitive, we may be like jungle savages listening for the throbbing of tom-toms while the ether around them carries more words per second than they could utter in a lifetime."

Lord Rees, a leading cosmologist and astrophysicist who is the president of Britain’s Royal Society and astronomer to the Queen of England believes the existence of extraterrestrial life may be beyond human understanding.

“They could be staring us in the face and we just don’t recognize them. The problem is that we’re looking for something very much like us, assuming that they at least have something like the same mathematics and technology."

“I suspect there could be life and intelligence out there in forms we can’t conceive. Just as a chimpanzee can’t understand quantum theory, it could be there as aspects of reality that are beyond the capacity of our brains.”

Read the full article at the Daily Galaxy by clicking on the discussion heading.

There is another possibility.  No other '[intelligent] species gets to the point of spacing faring on a scale that permits inter solar system travel.  Evolutionary theory suggest that 'selfish' creatures do best in the struggle to survive and propagate.  it seems that the people who gain the most power do it by treating other people, creatures, and the earth itself, as disposable.  That suggest the distinct possibility that humans will transform their nest (planet earth) into a place that cannot sustain them as humans.  Perhaps this is an inevitable consequence of being so smart with tools? Perhaps all species that develop advanced tool making and culture to sustain tool making growth end up going extinct because they won't plan long term, but insist on the short term profit at whatever cost to 'externalities?' Pessimistic thought, yes?

That is one possibility though slightly anthropomorphic in that it considers the alien thought processes are similar to ours, making their history is similar to ours!

This is what Darwin said about adaptability! 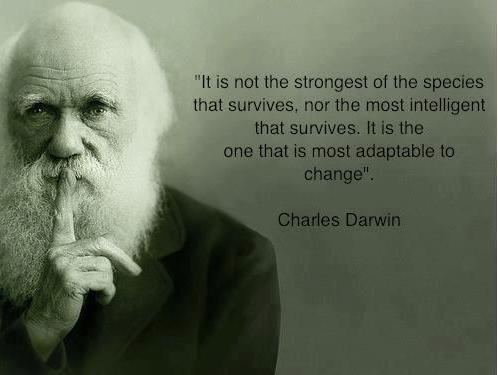 I love this quote but it is still anthropomorphic.

Tom, it's difficult to edit because it is short and to the point; if I was a gorilla, I would think like a gorilla and probably wouldn't give a dams about evolution, or if I was a bee.  If I was from another planet say (possible ?) maybe I wouldn't be so worked up about evolution.  Well that's the best I can do for now ... if anything more come to mind I'll write it up...

Another possibility is  that depending where they are located in our Galaxy in relation to us, their advancement in technology and how far they are a head of us in in centuries!

The Galaxy is some 100 to 120 thousand light years across so to receive a signal from across the Galaxy means that the signal would have been sent a minimum of 100 thousand years years ago!

We have been transmitting signals openly for the last 100 years so our transmissions would be only 100 light years out from now! Also the the strength of those signals we have transmitted have been small.

The signals could also be attenuated, distorted and absorbed in the interstellar medium, which means how much signal strength would the radio waves have after they have travelled even a mere 100 light years?

In other words bloody small!

So in reality what are our chances of picking up a ghost of a signals whisper?

Additionally, the continuous expansion of our universe, ergo, doppler shift - wavelength is stretched, lowers frequency. Although, there is no empirical evidence thus far, however, from a mathematical standpoint life on other planets throughout the universe is very much plausible---Drake Equation.

I see why many of the members here read sci-fi ! (just a joke).  I agree that it is possible even probable that life exists in other parts of the universe but with our tunnel vision we haven't been able to detect it...

Sarcastically I say "The Royal Family" didn't recognize intelligent life of the indigenous people in the Americas, New South Queensland (Australia), South America, and other places on the Earth.

."Can you trust them now - "The problem is that we’re looking for something very much like us, assuming that they at least have something like the same mathematics and technology."

The whole country before it became Terra Australis it was also known as  New Holland!