Loren Miller replied to Loren Miller's discussion Prokofiev Piano Concerto No. 2, First Movement – My Memories in the group The Music Box
"Entirely my joy, Randall.  I should mention that YouTube has the rest of the concerto with…"
14 hours ago

Randall Smith replied to Loren Miller's discussion Prokofiev Piano Concerto No. 2, First Movement – My Memories in the group The Music Box
"Goodness Loren, I had no idea you were (are) so knowledgable about music! Impressive--as is the…"
14 hours ago

Loren Miller replied to Loren Miller's discussion Prokofiev Piano Concerto No. 2, First Movement – My Memories in the group The Music Box
"I should mention too, I suppose, that next Saturday, I get to hear The Cleveland Orchestra perform…"
14 hours ago

This is about the deep past and it is vertiginous. It is also about very big objects, about the humongous size of 'everything' and the kind of events that can conceivably (barely) happen at that scale. (Bold is mine.)

Some people hypothesise that what we call the universe may only be one of many. Is there any conceivable way that we could ever detect and study other universes if they exist? Is it even falsifiable? This was a key question the world's leading expert on the physics of the Universe was was asked in an interview with the BBC. 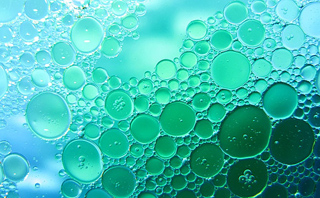 It is no surprise that we observe the physical constants to be finely-tuned. If they weren't, we wouldn't be here to observe them. One way of testing the theory that we may be one of many universes would be to look for features in the cosmic microwave background radiation (CMB) which would indicate the collision of another universe with ours in the distant past.

The circular patterns within the cosmic microwave background suggest that space and time did not come into being at the Big Bang but that our universe in fact continually cycles through a series of "aeons," according to University of Oxford theoretical physicist Roger Penrose, who says that data collected by NASA's WMAP satellite supports his idea of "conformal cyclic cosmology".

Penrose made the sensational claim that he had glimpsed a signal originating from before the Big Bang working with Vahe Gurzadyn of the Yerevan Physics Institute in Armenia. Penrose came to this conclusion after analyzing maps from the Wilkinson Anisotropy Probe (WMAP shown above and at bottom of page). These maps reveal the cosmic microwave background, believed to have been created just 300,000 years after the Big Bang and offering clues to the conditions at that time.

Penrose's finding runs directly counter to the widely accepted inflationary model of cosmology which states that the universe started from a point of infinite density known as the Big Bang about 13.7 billion years ago, expanded extremely rapidly for a fraction of a second and has continued to expand much more slowly ever since, during which time stars, planets and ultimately humans have emerged. That expansion is now believed to be accelerating due to a scientific X factor called dark energy and is expected to result in a cold, uniform, featureless universe.

Penrose, however, reports Physics World, takes issue with the inflationary picture "and in particular believes it cannot account for the very low entropy state in which the universe was believed to have been born – an extremely high degree of order that made complex matter possible. He does not believe that space and time came into existence at the moment of the Big Bang but that the Big Bang was in fact just one in a series of many, with each big bang marking the start of a new "aeon" in the history of the universe."

The core concept in Penrose's theory is the idea that in the very distant future the universe will in one sense become very similar to how it was at the Big Bang. Penrose says that "at these points the shape, or geometry, of the universe was and will be very smooth, in contrast to its current very jagged form.

This continuity of shape, he maintains, will allow a transition from the end of the current aeon, when the universe will have expanded to become infinitely large, to the start of the next, when it once again becomes infinitesimally small and explodes outwards from the next big bang. Crucially, he says, the entropy at this transition stage will be extremely low, because black holes, which destroy all information that they suck in, evaporate as the universe expands and in so doing remove entropy from the universe."

The foundation for Penrose's theory is found in the cosmic microwave background, the all-pervasive microwave radiation that was believed to have been created when the universe was just 300,000 years old and which tells us what conditions were like at that time.

The evidence was obtained by Vahe Gurzadyan of the Yerevan Physics Institute in Armenia, who analysed seven years' worth of microwave data from WMAP, as well as data from the BOOMERanG balloon experiment in Antarctica. Penrose and Gurzadyan say they have clearly identified concentric circles within the data – regions in the microwave sky in which the range of the radiation's temperature is markedly smaller than elsewhere.

The Cosmic Microwave Background (CMB) radiation is the remnant heat from the Big Bang. This radiation pervades the universe and, if we could see in microwaves, it would appear as a nearly uniform glow across the entire sky. However, when we measure this radiation very carefully we can discern extremely faint variations in the brightness from point to point across the sky, called "anisotropy". These variations encode a great deal of information about the properties of our universe, such as its age and content.

The "Wilkinson Microwave Anisotropy Probe" (WMAP) mission has measured these variations and found that the universe is 13.7 billion years old, and it consists of 4.6% atoms, 23% dark matter, and 72% dark energy.

According to Penrose and Gurzadyan, as described in arXiv: 1011.3706, these circles allow us to "see through" the Big Bang into the aeon that would have existed beforehand. They are the visible signature left in our aeon by the spherical ripples of gravitational waves that were generated when black holes collided in the previous aeon.

The "Penrose circles" pose a huge challenge to inflationary theory because this theory says that the distribution of temperature variations across the sky should be Gaussian, or random, rather than having discernable structures within it.

Julian Barbour, a visiting professor of physics at the University of Oxford in an interview with Physics World, says that these circles would be "remarkable if real and sensational if they confirm Penrose's theory". They would "overthrow the standard inflationary picture", which, he adds, has become widely accepted as scientific fact by many cosmologists. But he believes that the result will be "very controversial" and that other researchers will look at the data very critically. He says there are many disputable aspects to the theory, including the abrupt shift of scale between aeons and the assumption, central to the theory, that all particles will become massless in the very distant future. He points out, for example, that there is no evidence that electrons decay.

Penrose and colleague Gurzadyn have answered the numerous critics who say that the circles do not contradict the standard model of cosmology in follow up paper, published on arXiv. In the short article, they agree that the presence of circles in the CMB does not contradict the standard model of cosmology. However, the existence of “concentric families” of circles, they argue, cannot be explained as a purely random effect given the pure Gaussian nature of their original analysis. “It is, however a clear prediction of conformal cyclic cosmology,” reports Physics World.

Do these concentric circles shown below offer a glimpse of before the Big Bang? What do you think? 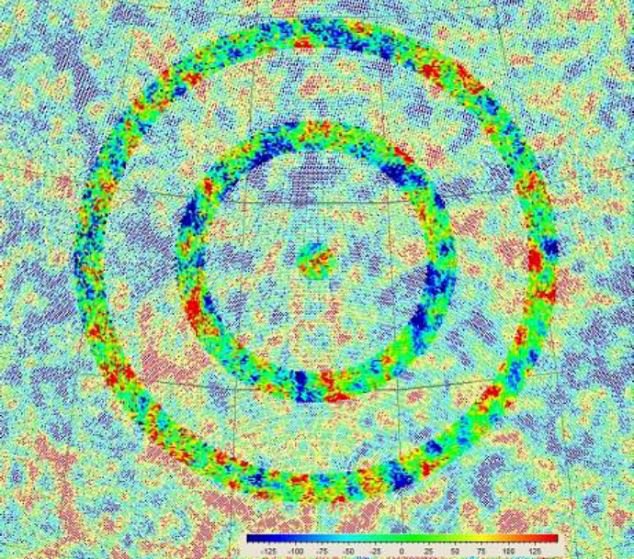 [W]hat I find remarkable is the fact that the discoveries of modern particle physics and cosmology over the past half century allow not only a possibility that the Universe arose from nothing, but in fact make this possibility increasingly plausible.  Everything we have measured about the universe is not only consistent with a universe that came from nothing (and didn’t have to turn out this way!), but in fact, all the new evidence makes this possibility ever more likely. Darwin demonstrated how the remarkable diversity of life on Earth, and the apparent design of life, which had been claimed as evidence for a caring God, could in fact instead be arrived at by natural causes involving purely physical processes of mutation and natural selection.  I want to show something similar about the Universe.  We may never prove by science that a Creator is impossible, but, as Steven Weinberg has emphasized, science admits (and for many of us, suggests) a universe in which one is not necessary.

The more data we collect the more questions it raises. curiouser and curiouser said Alice.

I still like my theory better, that the big bang is actually a cosmic jet. I see no reason to postulate multiverses, or differing cosmological constants. I postulate that our situation is a local event within an infinite universe that has always been, and always will be. The concentric circles could represent wave patterns in the jet, much like we see from rocket motors.