Loren Miller commented on Loren Miller's group Quote Of The Day
"I gave them statutes that were not good and ordinances by which they could not live. I defiled them…"
7 hours ago

Stephen Brodie commented on Loren Miller's group Quote Of The Day
"Loren, I remember watching Sam Harris paraphrase that quote in one of his debates. Brilliant."
19 hours ago

Loren Miller commented on Loren Miller's group Quote Of The Day
"Atheism is not a philosophy; it is not even a view of the world; it is simply an admission of the…"
yesterday

Loren Miller commented on Loren Miller's group Quote Of The Day
"Onyango, it ALSO sounds like a certain clique of fatuous fools who follow a certain ex-president.…"
yesterday

Onyango Makagutu commented on Loren Miller's group Quote Of The Day
"Joan, this sounds like Ivan talking to Aloysha or is it the old priest advising the young penitent.…"
yesterday

Joan Denoo commented on Loren Miller's group Quote Of The Day
""Above all, don't lie to yourself. The man who lies to himself and listens to his own lie…"
yesterday

Stephen Brodie commented on Michel's group The Daily Cosmos or Interesting Facts about the Universe
""Probing the Dark Universe" - A Lecture by Dr. Josh Frieman"
yesterday

Mrs.B commented on Sydni Moser's group Coffee Break
"I think I'll see if I can read that book."
yesterday

Joan Denoo commented on Sydni Moser's group Coffee Break
"If we fail to remember or can no longer remember the stories of our ancestors, that wisdom cannot…"
yesterday

Joan Denoo commented on Sydni Moser's group Coffee Break
"Davy, I am very sorry you were not able to sit down with your elders and hear their stories, see…"
yesterday

Joan Denoo commented on Sydni Moser's group Coffee Break
"I had two years of exposure to Black students in a Washington, D.C. housing project and was able to…"
yesterday

Davy commented on Sydni Moser's group Coffee Break
"Just a little something Awabakal/ Awabaghal  means People of the plain. I think that the plain…"
Monday

This emerging technology could save water and result in instantasneous extinguishing of ther flames. Electrons sand ions in soot respond to electrical currents. The electrical field pushes the fire away from its source, so the flames simply go off.

An electric field pushes a flame away from a burner in a recent Harvard experiment. 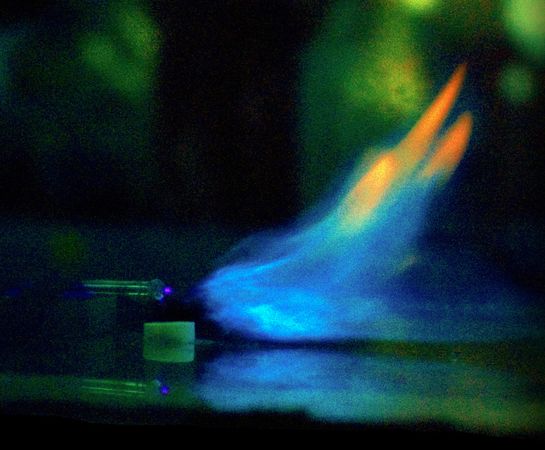 Electric wands could allow future firefighters to extinguish flames with a wave of the hand, recent experiments suggest.

Currently, firefighters use water, foam, powder, and other substances to tame flames. But a team from Harvard University's Whitesides Research Group has shown that electric fields can snuff out fires too—potentially reducing water damage as well as environmental threats posed by fire retardants.

The scientists connected a thin wire to a 600-watt amplifier—roughly as powerful as a high-end car stereo and about as big as a file cabinet—plugged into the wall.

The "wand" system generated an electric field with the strength of a million volts per meter, "approximately the field necessary to generate a spark in dry air," said chemist Ludovico Cademartiri, a postdoctoral fellow at Harvard.

Whenever the researchers brought the electric wand close a burner emanating thin jets of fire up to 20 inches (50 centimeters) tall, the flames almost instantly went out.

Despite it's almost Harry Potter-level power, though, the firefighting wand is said to be quite safe. Its electric frequency, voltage, and current "are not sufficient to create health issues in a healthy person," Cademartiri said.

Future versions may be even more benign. A wand using only a tenth of the experiment's wattage could do nearly as good a job, Cademartiri speculated—making the wand system potentially portable in some future iteration.

How the Electric Firefighting Wand Works

Electrons, ions, and soot inside a flame can all respond to electric fields. (Related: "Electric Ash Found in Iceland Plume Miles From Volcano.")

Based on this principle, the wand in the experiments essentially uses electricity to push the flame away from the burner, "detaching it from the fuel source, so it goes out."

The scientists now want to move to suppressing fires both farther away and wider in scope by experimenting with the shape of the electrode and altering the current, frequency, and voltage involved.

"We have only recently started to look into the scalability potential," Cademartiri said.

Eventually, similar devices could be installed in the ceilings of buildings or ships—much as water sprinklers are now—or carried, backpack style, by firefighters, Cademartiri speculated.

The wand is no cure-all, though, he added. As promising as the tool seems in enclosed quarters, the wand might not work well against forest fires and other widespread conflagrations, he said. "The effects we see depend on the strength of the electric field," he explained. "It is a challenge is to create such large fields over large areas."

Aside from extinguishing flames, the wand may be just the thing in tight spots where a bit of fire is just what's needed, such as engines, furnaces, and torches. That's because electric fields can also influence the temperatures of flames and where they flicker, the researchers found.

"Finding new ways to affect and control flames," Cademartiri said, "could have repercussions on a quite broad range of technologies."

Permalink Reply by Adriana on March 30, 2011 at 8:59pm
Forget the Firetruck: Future Firefighters May Use Ghostbusters-Like Electric Backpacks

We learned watching Ghostbusters that for busting ghosts, nothing beats a well-placed zap of protons from a backpack-turned-positron collider. Now, researchers at Harvard University are working on a technique that could let future firefighters do their job (sort of) the same way, using an electric beam—generated by a portable amplifier, which might even fit in a backpack—to put out the flames.
This futuristic method is based on a centuries-old observation that electric fields can do funny things (videos) to flames, making them sputter and even snuffing them out.
The researchers’ early-stage prototype consists of a 600-watt amplifier hooked up to a electric beam-shooting wand, according to their presentation at the American Chemical Society meeting earlier this week. In tests, they were able to quickly zap out flames over a foot high.
A firefighting electric beam could probably be generated only using a tenth as much energy, estimated Ludovico Cademartiri, one of the researchers, meaning a much smaller amplifier would do the trick. They’re hoping to go after bigger fires, too, but the prototype has proven the concept. “Our research has shown that by applying large electric fields we can suppress flames very rapidly,” Cademartiri said.
While fighting fire with electricity seems to work, it’s not quite clear how it works. Charged particles of soot appear to respond to the electric field, throwing the flame off balance. It’s likely a bunch of other things are all happening at once—but no one’s sure yet what those processes are.
Whether it’s ye olde villagers passing buckets of water from the nearest well or modern-day firefighters with pressurized hoses and flame-quenching foams, putting out fires has has always been a matter of smothering them with some material. Zapping them with electricity instead could let firefighters do their work from farther away, and could be used to target a specific area—say, carving an escape route through the flames.