Grinning Cat replied to Ruth Anthony-Gardner's discussion Systemic Racism - Contact Legislators in the group All things #TrumpSewer
"I've called my congresscritters' offices, telling the Republican senator that the…"
7 hours ago

Mrs.B commented on Doone's group Humans of Earth and the Biggest Loser of All Time (SCUMP) News
"Works for me!"
8 hours ago

Doone commented on Michel's group The Daily Cosmos or Interesting Facts about the Universe
"Awesome!!  This ESA Gaia animation shows the proper motions of 40,000 stars, all located…"
8 hours ago

Grinning Cat commented on Loren Miller's group Quote Of The Day
"(Correction: that recording of War is a Racket was read by John Greenman.)"
10 hours ago

Grinning Cat commented on Loren Miller's group Quote Of The Day
"An actual quote from War is a Racket: The only way to smash this racket is to conscript…"
10 hours ago

Grinning Cat commented on Loren Miller's group Quote Of The Day
"Thanks! I found War is a Racket online, both as a recording of Gen. Butler's speech and…"
10 hours ago

Grinning Cat commented on Randall Smith's group Just sports stuff.
"Just a random comment to Stephen: I'm an American who takes absolutely no offense with your…"
10 hours ago

Randall Smith commented on Randall Smith's group Just sports stuff.
"So I see this football player crossing himself before receiving a punt, only to be tackled so…"
15 hours ago

Onyango Makagutu commented on Loren Miller's group Quote Of The Day
"Grinning Cat thanks for the recommendation. I will check it out. And while on the subject of war, I…"
16 hours ago

I ran across this plan for education that takes on the challenges facing us in 2020. We have had…See More
19 hours ago
2 Comments 2 Likes

Chris B commented on Joan Denoo's group All things #TrumpSewer
"I expect nothing good from someone who thinks only of himself."
19 hours ago

Chris B commented on Hope's group Imagine No Organized Religion
"I wish more muslim women here would look like that - easier to talk to."
20 hours ago

Mrs.B commented on Sydni Moser's group Coffee Break
"Yes, it was all over my pc too. I'll just stay home with my kitties....they don't lie,…"
21 hours ago

Reading Chauncey DeVega's entire article, Shunning masks is a central sacrament of the Trump cult: Reason can..., is enlightening and chilling.

… Beginning in the 1980s, American conservatism has morphed into a type of religious politics in which fact and reason have been subsumed by faith.

The Republican Party's policies ... are rooted in faith. They are easily refuted and disproved by the empirical data. In practice, that makes no difference to those who are true believers.

At the heart of Trumpism is a form of existential angst, ... a fundamental crisis of meaning and human value.

... references to the psychopathology of the president and his followers as a "cult." ... contain a truth that's more dangerous than we may realize.

... remember "the Jonestown massacre" of November, 1978 ... "How could 900 presumably educated, mature adults, poison themselves — and in some cases their own children — and do it for such an obvious egotist?

But this time it's not just a circle of deluded followers — it's the whole country that's at the mercy of an egotistical demagogue. And the cup he's offering is not cyanide but ecocide: the extinction of all life on earth. [emphasis mine]

... people accept Trump as their "high ego-ideal" and "exchange [their] narcissism for homage to [it]".

Whoever courts an ego-ideal, secretly pines for the tantalizing interplay of pleasure and pain. By transferring primary narcissism to the safe-keeping of some supposed strongman, more often than not, s/he automatically takes on the role of being passively active in some theatre of sadomasochism.

Donald Trump knew from the beginning that the coronavirus was lethal, not a hoax. Trump simply chose to lie to the American people about the pandemic, as well as to actively sabotage relief efforts, and in doing so committed a crime against humanity. Trump's political cult members are not moved by these facts. ... thousands of his followers actually ran into the arena, as though they were on fire with joy.

Trump's followers run toward death because he and his movement are providing them with emotional nourishment and meaning in their lives.

... they themselves feel touched and empowered. In living the faith of their right-wing political religion, Trump's followers have found "salvation" through a leader who is simultaneously "like them" but is also a type of semi-divine prophet whose example they aspire to imitate or emulate. [emphasis and bold mine]

Authoritarianism and other fake populist movements gather power through their ability to transfer the leader into a type of godhead, an extension of an embattled and fearful self that is made immortal through loyalty to the Great Leader. Moreover, authoritarianism — and fascism in particular — is a type of death cult where the followers will willingly sacrifice themselves ...

So the tongue-in-cheek references to "drinking the Kool-Aid" are not as far-fetched as they seem!

Don't drink the Kool-Aid should refer to everyone except Trump himself.

If something happened to take Trump and Pence out of action for the two months until Inauguration Day, and we had to have Nancy Pelosi as acting president... I'd celebrate!

That "something" would have to be awfully serendipitous ... like having Marine One crash with the two of them onboard, though that would also cost the lives of the pilot and co-pilot, and neither of those two shit-stains are worth such a loss.

About all I can hope for at this point is that we can plow through to 20 January, 2021 at 12:00 noon, whereupon Biden becomes president and Trump finds himself beset with more legal issues, criminal and civil, than his worst nightmare could encompass, issues which will utterly occupy him for the rest of his life, I sincerely hope.

The pilot and copilot could survive and quickly and fully recover. I'd be fine with that.

Back to more likely scenarios: I'm sure many Secret Service agents, as well as Capitol Police officers and US servicemembers, despise the deadly lying orange Contagious Caligula, and, the second he's no longer president or commander-in-chief, would be overjoyed to haul him out on his ass if necessary. 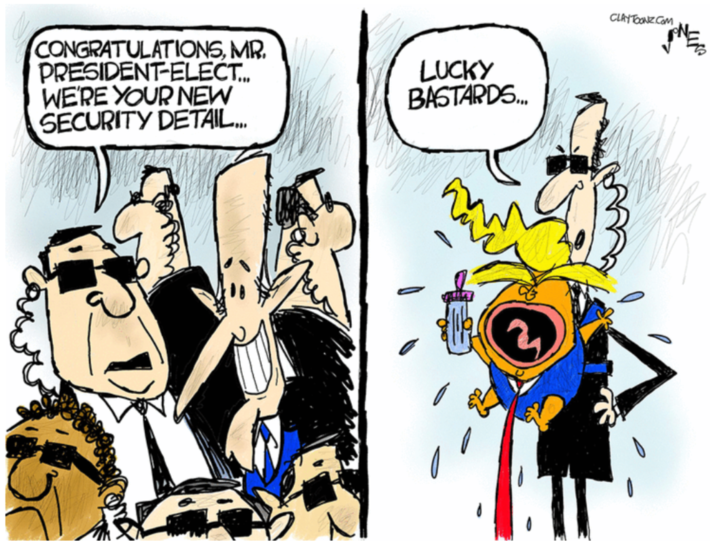 ... if Biden's administration cannot find ways to relieve the deeply felt pain and social alienation being experienced by wide swaths of American society then what follows will be a regime of racialized Christian fascism, quite possibly much more disciplined, more ideological and therefore more dangerous than Trump's clumsy authoritarianism.

There is something attractive about Trumpism, even for nonwhites. It is the hyper-masculinity. That is the core essence of fascism. ... what people who follow fascists are really looking for is a sense of empowerment.

So they entered a world of magic, the figure of magical Jesus, what anthropologists call a crisis cult. One cannot try to free them from the cult by using rationality and reason. [emphasis and bold mine]

... in places where the pandemic is worse, Donald Trump is more popular. This is an example of Trumpism and conservatism more generally being a type of political religion, a death cult. The more death and suffering that takes place in America, the more popular and powerful Trumpism and its variants will become.

It is a death cult. With the rupturing of social bonds and a sense of place within society, Trump's followers and the Christian right invest their energy in self-destructive behaviors, both as individuals and societies. The sociologist Émile Durkheim made an astute observation about right-wing groups, that those types of groups which seek the annihilation of others are really at the core driven by a desire for self-annihilation.

... in response to the breakdown of social bonds and a sense of place and meaning within a society. [emphasis mine]

As I see it, we're living through the breakdown of traditional white male hierarchy, a form of what Riane Eisler calls Dominator Culture. Erosion of Dominator social bonds, a sense of place in the Dominator hierarchy, a loss of meaning from within that narrow morally bankrupt silo leaves us lost, unanchored. Dominator Culture doesn't support global cooperation to secure racial justice and a liveable future for everybody. It worked as a cultural system among local competing nations, but has become dysfunctional in a climate-challenged global world. Now cooperation rather than competition is necessary for human survival.

Few can imagine a Partnership Culture future with mutual respect, authentic self-esteem, and gender equality. There are no TV series, movies, novels, songs, comics or memes to teach us. When self-esteem based on invidious tribal comparison causes cognitive dissonance, and we can no longer just brag that we're better than "them", something snaps. We regress to the victim-rescuer-persecutor triangle, blaming our failures on persecutors, saving up self-pity "stamps", to redeem as guilt-free persecution of our victims. [Drawing on Eric Berne] This regression is the least functional Dominator form, because it forces us to make sense of all people and actions as only victim, rescuer, or persecutor. There are no complex human beings, worthy of respect despite having made mistakes, and capable of learning. There are only rigid, black and white, characters. Negotiation becomes impossible. The real agenda is always that rush of self-righteous pride when we "own the libs", prove somebody is a fool, or take justified vengeance of "those who deserve it". It's a self-destructive way of life, and ultimately, in my view sad and pathetic. It also requires self-deception, both to misinterpret the motives of others (no one ever has authentic good will) and to fool yourself into identifying as a twisted, stunted "superior" self.

It's ironic that almost half of us have lost a sense of meaning, exactly when humanity faces it's greatest challenge, it's ultimate existential challenge. To me this time through which we live is exquisitely, painfully, meaningful.

And it's not like most people mired in the death cult have family members who'll try to "deprogram" them.

One of the striking differences between the domination and partnership models is the valuing of "power over" others in one, vs. "power with" and "power to".