Stephen commented on Hope's group Imagine No Organized Religion or at least a Religion without Scump
"The symbol was the shape of the scaffold or what they ironically called the Tyburn tree. Just…"
13 minutes ago

Joan Denoo commented on Hope's group Imagine No Organized Religion or at least a Religion without Scump
"Stephen, perhaps this will help: "Tyburn Convent, 8 Hyde Park Place, Shrine of the…"
32 minutes ago

Stephen commented on Loren Miller's blog post Too High A Price
"A smart fella that Hitchens."
34 minutes ago

Loren Miller commented on Loren Miller's blog post Too High A Price
"I could put the following under the Quote of the Day, but after Stephen's and Joan's…"
44 minutes ago

Stephen replied to Ruth Anthony-Gardner's discussion Protect the US Post Office in the group Political Visions.
"I'm pretty sure it's not postal voting that Scump is against Per se but postal voting…"
1 hour ago

Stephen replied to Davy's discussion Your political Compass in the group Political Visions.
"Shows you how much of a lefty I am I even bulked at taking the test. Lol"
1 hour ago

Grinning Cat replied to Ruth Anthony-Gardner's discussion Protect the US Post Office in the group Political Visions.
"There's also this "heartening" news: "Mail sorting equipment is being removed…"
1 hour ago

Grinning Cat commented on Hope's group Imagine No Organized Religion or at least a Religion without Scump
"Oh, yeah, from that Christian math textbook's homework: "God created people to…"
1 hour ago

Stephen replied to Ruth Anthony-Gardner's discussion Protect the US Post Office in the group Political Visions.
"Yes, Ruth. Just been reading about it. For the past 3½ years, America has been to look like…"
1 hour ago

Grinning Cat replied to Davy's discussion Your political Compass in the group Political Visions.
"Working link: https://www.politicalcompass.org/ This looked like an expanded version of the…"
1 hour ago

Welcome to Political Visions. The aim of this group is to learn about other peoples political…See More
1 hour ago
51 Comments 2 Likes

Mrs.B commented on Hope's group Imagine No Organized Religion or at least a Religion without Scump
"I really like that one!"
1 hour ago

Mrs.B commented on Doone's group Humans of Earth and an Imbecile Named Scump News
"Yeah, we know...it's always about him."
1 hour ago

Mrs.B commented on Doone's group Humans of Earth and an Imbecile Named Scump News
"Never seen it perfect yet!"
1 hour ago

Ruth Anthony-Gardner added a discussion to the group Political Visions.

Joan Denoo commented on Loren Miller's blog post Too High A Price
"Problem: "the emergence of Trump also came the 'basket of deplorables'." (Loren…"
2 hours ago

I edit all the time, even without creating a god (my cat wouldn't let me).

Of course we all know who the boss is too. There ya go! We know our place! I ran onto something very similar a few years back:

You know your god is man-made when he hates all the same people you do.
-- from Usenet

The parody of Michelangelo's "The Creation of Adam" portraying a half dozen or so gods, which I've seen with the caption "Pick one" or "Choose wisely", can also be interpreted as Adam (or humankind) creating all the gods! 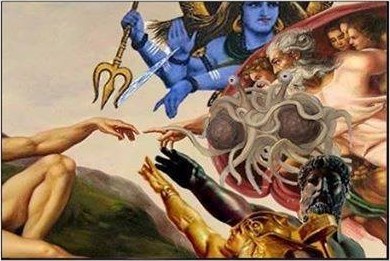 Related: some years ago Ontario Consultants on Religious Tolerance ran a small pilot study to see if people could reliably assess the will of God through prayer, specifically concerning same-sex marriage. Participants came from both conservative and liberal religious backgrounds, and had different personal opinions on whether their God approved of same-sex marriage.

Anyway, two-thirds of them felt they had received a response, and not one reported that God disagreed with them!