Chris B commented on Sydni Moser's group Coffee Break
"I'm not sure; people tend to see the situation they remember from their youth as normal and…"
15 minutes ago

Kurt Neuleuf commented on Sydni Moser's group Coffee Break
"I fear Davy is right, Civilisation as we know is rapidly collapsing. I get the feeling that by 2025…"
2 hours ago

RichardtheRaelian left a comment for Intel Core I7
""Happy Birthday!""
3 hours ago

Mrs.B replied to Loren Miller's discussion God Comes Out as Pro-Choice (Betty Bowers) in the group Freethought and Funny Bones
"Would have been something else......"
13 hours ago

Andy Stout replied to Loren Miller's discussion God Comes Out as Pro-Choice (Betty Bowers) in the group Freethought and Funny Bones
"If only Mary had an abortion..."
14 hours ago

Ian Mason commented on Sydni Moser's group Coffee Break
"Extreme weather but mediocre government and inadequate responses. Nobody wants to be bold, except…"
19 hours ago

Loren Miller commented on Loren Miller's group Quote Of The Day
"Human decency is not derived from religion. It precedes it. -- Christopher Hitchens Our forebears…"
19 hours ago

WAR is a racket.

WAR is a racket. It always has been.

I am not a pacifist by any stretch of the imagination, however, wars of the U.S. have an undercurrent of land and resource grabs, of violence not negotiation, white supremacy, even of religious intollerance.

We can do better than that; as atheists and agnostics, we have no reason to claim supremacy of any kind. We can learn personal and interpersonal skills of:

Sorry, Loren, I am not following your very reasonable and responsible rule of not dominating a page. I just can't seem to help myself.

Of course, the one expense the instigators of war don't share equally with the majority of people is the fighting and the dying.

There is no part of the world, that is not subject to peril and danger of man’s life, which life of itself also is most fugitive. So manifold mischances and evils assail man on every side that not without cause Homer did say: Man was the most wretched of all creatures living.

Butler suggested taking the profit out of war, by "conscripting" the executives and officers of munitions makers and warship and warplane builders, and bankers and speculators that profit by them, and generals and admirals and politicians -- to get the exact same salary as enlisted servicemembers on the front lines; actually "everyone in the nation be restricted to a total monthly income not to exceed that paid to the soldier in the trenches!"

He also suggested requiring a referendum before going to war, limited to those eligible to be drafted and who'd potentially be risking their lives. (This excludes many congresscritters!)

Also worth a look, say if you can get a copy via interlibrary loan: From War to Peace: A Guide to the Next Hundred Years by Kent Shifferd. He points out how our societies have a long history of schizophrenically viewing war both as an almost unthinkable, horrific last resort and as a noble and glorious exercise of national power, and suggests that we might have an opportunity to outlaw war just as we've outlawed slavery.

(This was written before the rise of Trump, Orban, and others in the current wave of populist authoritarians, though!)

Ruth has also suggested War is a Force that Gives Us Meaning by Chris Hedges, on the seductive, addictive power of war and on our appetite for violence.

Editorializing and speculating here: could something like sportsball replace war? And can we boldly redesign or improve "human nature"? With the planetary catastrophes we're facing, the last thing we need is to keep senselessly killing each other.

I doubt it. War allows many would be nothings to become heroes overnight. One has to find something that would make millions or thousands find meaning in their drab lives.

And can we boldly redesign or improve "human nature"?

this, i guarantee is not possible. In man, there is the potential to create great harm or good. Another is not possible. Man is the only animal that causes pain as an end in itself to his fellows, I think.

A recent "Calvin and Hobbes": 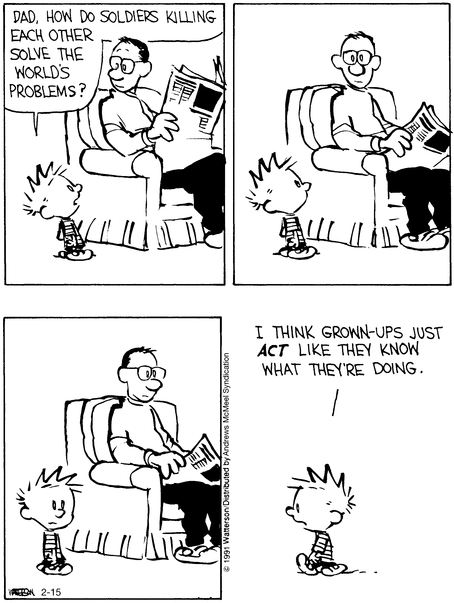 "All over the ancient world populations were now set against populations, as men were set against women and against other men. Wandering over the width and breadth of this disintegrating world, masses of refugees were everywhere fleeing their homelands, desperately searching for a haven, for a safe place to go.

"But there was no such place left in their new world. For this was now a world where, having violently deprived the Goddess and the female half of humanity of all power, gods and men of war ruled. It was a world in which the Blade, and not the Chalice, would henceforth be supreme, a world in which peace and harmony would be found only in the myths and legends of a long lost past.”

~ Riane Eisler, The Chalice and the Blade: Our History, Our Future