Josh Karpf commented on Sydni Moser's group Coffee Break
"A lifelong atheist, I first went to a synagogue to please a Jewish gf I was deeply in love with. I…"
25 minutes ago

Mrs.B commented on Sydni Moser's group Coffee Break
"I did that in church when I was a young girl. I decided not to bow head, & close eyes once, to…"
49 minutes ago

Randall Smith commented on Sydni Moser's group Coffee Break
"Two days ago, I attended a "breakfast get-together" of many retired school teachers that…"
6 hours ago

Loren Miller commented on Loren Miller's group Quote Of The Day
"Many of us saw religion as harmless nonsense. Beliefs might lack all supporting evidence but, we…"
6 hours ago

It should read,"Alliance for Atheist Extraterrestrial diplomatic Contact!
12 hours ago
0 Comments 0 Likes

Think about it and consult a dictionary before commenting. I've gotten some idiotic responses to this. 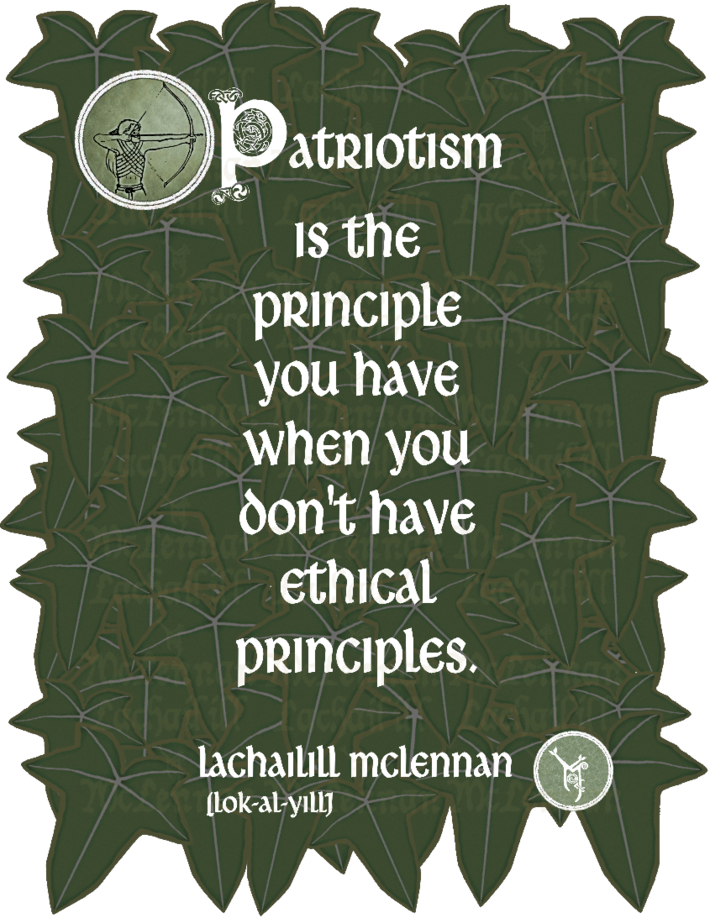 Patriotism is the extension -- in theory -- of an ethical principle to all the people of your nation. ["Intheory", because for certain scoundrels, a faux patriotism is their last -- or even first! -- refuge.]

In theory, patriots act altruistically -- ie not in their immediate self-interest -- when the interests of their nation are concerned.  Thus patriotic soldiers risk -- or even consciously sacrifice -- their own lives in armed combat.

In and of itself, this is not a bad thing.  In fact, abstractly, it is a good thing -- the highest form of compassion and ethics, in fact.

Concretely, however, if your nation is doing a bad thing -- trying to conquer Europe, exterminate races it hates, impose a dictator-puppet on your country -- then this self-sacrficing behavior will be in a bad cause.

In an ideal world, the human race would never have divided into different tribes, races, ethnic groups, religions, and we would not have nation-states with conflicts of interest leading to war.  We would all have evolved socially at the same economic/cultural level.

But there is no God or gods governing the fate of our species. It's just blind, pitiless evolution, with the accidents of genetics, geography, historical events governing how our species has split up into conflicting groups which we call nations.

Perhaps, someday, we will be re-united as a species. Maybe genetic engineering will give us all very high IQs, and other desirable character traits (those influenced by biology), and the continued growth of the economy will put us all above the poverty line.

It's possible that the huge desirability of liberal democracy over all the alternatives will make it triumph over all the autocracies, theocracies, one-party states ... until our differences are only as significant as the differences between Belgium and the Netherlands ... just matters of language and custom.

But until then, we cannot jump over our own heads.  If your country is a liberal democracy, you should be a patriot.

Which doesn't mean being an uncritical supporter of the government of the moment!  (Indeed, as in the US right now, it means the opposite -- at least that's my view, but you can certainly be of another persuasion and still be a patriot, and so you should be. Like the human race as a whole, the American part of it did not have an immaculate conception, but it's come a long way in terms of providing a decent environment for those who want to take advantage of it.)

Sometimes, when people are skeptical or critical of the concept of 'patriotism', they really mean what we often call 'nationalism': not just love for one's own country, but hatred for others.

But the first does not imply the second.  In fact, a deep understanding of patriotism ought to allow patriots to reject aggressive nationalism .

For example, an American patriot should understand that a Cuban patriot loves his/her country just as much as an American loves his or hers, and that Cubans can have some justified grievances against America, which we should try to understand.