Loren Miller commented on Loren Miller's group Quote Of The Day
"Well, so long as we're on the topic of Omar Khayyam:"
1 hour ago

Loren Miller commented on Loren Miller's group Quote Of The Day
"What a shame, Stephen.  I'm not certain, but I think there is a copy of the Rubaiyat in…"
2 hours ago

Mrs.B commented on Loren Miller's group Quote Of The Day
"Yes, he does."
2 hours ago

Stephen Brodie commented on Loren Miller's group Quote Of The Day
"Loren I was once given a beautifully bound copy of the Rubaiyat by Omar Khayyám. I…"
4 hours ago

Loren Miller commented on Loren Miller's group Quote Of The Day
"He (the Rev. Mr. Whitefield) used, indeed, sometimes to pray for my conversion, but never had the…"
9 hours ago

RichardtheRaelian left a comment for Klinger
""Happy Birthday!""
14 hours ago

Now, for a little bit of Pop Maths:

Look, we don't want to take all of the magic out of life. After all, can "science" and "mathematics" quantify something as mysterious as the beauty of music, or the evil of the human spirit, or the madness of a panicked mob?

Yeah, pretty much. Get enough data, create the best algorithm, and you can get some nice pretty graphs that tell you ...

#5. How to Write a Successful Pop Song 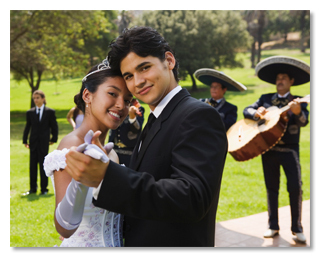 Music is borderline magic; great songs touch you on a spiritual level, instantly changing your mood or causing stirring memories of your youth to come roaring back. How could you ever predict whether or not people will like a song with some cold computer program? It all comes down to what's in people's hearts.

Or maybe not. We've already explained how your brain secretly loves "Call Me Maybe" due to the way "catchy" pop songs trigger an almost addictive response. You could say, "But what about the meaning of the lyrics, or the passion of the performer?" but then you'd remember that you loved "Gangnam Style" even though you had no idea what it was saying (we looked it up on Google Translate, and it looks like the song is about the time Psy got high on meth and had sex with a transvestite while riding a horse). So if it just comes down to manipulating your brain, we should be able to come up with hard data on what works.

Scientists at the University of Bristol devised an algorithm to do just that: They analyzed songs from the U.K. Top 40 chart from the last 50 years. It takes into account 23 variables -- time signature, duration, tempo, loudness variability, etc. -- and from that they programmed software that could chew up any song and spit out the probability that it would become a hit with the public.

According to the researchers, the software has around a 60 percent accuracy rate for picking out songs that will make it to the top five and ones that won't even go above 30 on the U.K. Top 40 singles chart. That's a stunning figure, considering that it can't account for so many other variables, such as how heavily the label promoted it, or whether there was some other factor in the song's success (i.e., if the song was featured in a hit movie).

The algorithm's accuracy is also dependent on cultural context -- what worked in 1970 won't necessarily work now: You see the way the blue line is starting to shoot back up? Simplicity is coming back. "Loudness," however, is on the decline after four decades on the rise: 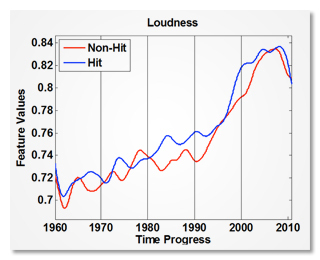 So, if you're a musician, take a look at the numbers and get to work. Before they find a cyborg that can do your job.

#4. Which Gang Is Responsible for a Crime

As we've previously mentioned, you'd be surprised to learn that the stupid premise behind Numb3rs, that crime show where a guy solves murders with a calculator, is basically a real thing that exists. Detectives with the LAPD collaborate with math professors to study trends in crime rates and try to predict, for example, which house in a particular neighborhood a criminal will try to burglarize next. Apparently, they can do this by essentially treating criminal behavior like traffic flow patterns, or even weather forecasting, as figuring out where a storm is going to hit apparently uses similar equations to figuring out which liquor store is going to get knocked off next.

But it goes beyond simply following crime trends. That's kids' stuff. Now they've figured out a way to actually pinpoint which specific gang is most likely to have committed a particular crime. The mathematicians, led by Andrea Bertozzi, compiled a ton of data related to gang crime from Hollenbeck, one of Los Angeles' most gang-ridden neighborhoods. They painstakingly went through police records and dug up around a thousand crimes to try to understand how exactly each gang operated.

Remember, while there are a certain number of crimes committed just for the hell of it, most of the time the criminals are doing it for a reason. This is especially true when they're members of an organization. Any organization, even an organization of high school dropouts who call themselves the East Side Skullfuckers, has goals -- they're fighting over territory, taking revenge, and so on. If you figure out what those goals are, and where they are in achieving them, you can predict what they're going to do.

So from there it was simply using the data to map out which gangs/members hated each other, who was in debt to whom, and who was overdue for a retaliation attack. When they plugged in the data for some known crimes (with the identities of the perps left out) to see if the computer could guess who actually did it, it was able to narrow down the suspects to one of three gangs 80 percent of the time (the neighborhood has about 30 gangs operating at any given time).

Holy shit, not even Batman's computer could do that. Although we can think of at least one program Bruce Wayne would find even more useful, which is the one that tells us ...

#3. Where Terrorists Are Hiding Bombs

#2. How New Drugs Will Affect People
#1. How to Keep a Crowd of People from Trampling Each Other