The Healing Power of Marijuana Has Barely Been Tapped

Medical marijuana is now legal in 18 states, but it's clear we've discovered a fraction of its potential for health.

There are now legal medical cannabis programs in 18 states plus Washington, DC, with pot fully legal for adults in two other states. Ironically, however, the actual healing power of the plant has barely been tapped. Smoking marijuana with THC (tetrahydrocannabinol), or better, vaporizing it (using a device to bake the plant material and inhale the active ingredients), has an indisputably palliative effect and can be medically useful for pain relief, calming and appetite stimulation. It already has confirmed benefits against glaucoma, epilepsy and other specific diseases and disorders. It also gets people high. THC triggers cannabinoid receptors in the brain and this produces the sensation of being stoned. These receptors are found in the parts of the brain linked to pleasure, memory, concentration, and time perception. 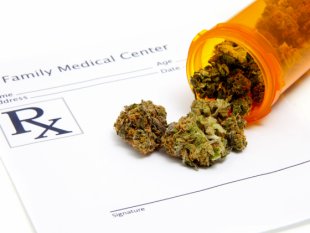 But, based mostly on research overseas there is an increasing consensus that the medicinal benefits of psychoactive THC pale in comparison to the non-psychoactive cannabidiol (CBD) from the leaves of the same plant--raw and unheated. Depending on the strain, some plants are high in CBD but also contain a lesser amount of THC which is said to enhance the healing potentiality. CBD does not make people feel “stoned” and actually counters some of the effects of THC (for example, suppressing the appetite vs. stimulating it). CBD is beginning to be recognized by researchers at mainstream medical institutions around the world as a potentially very powerful weapon against cancer.

Researchers Sean D. McAllister and Pierre Desprez, who conducted studies of CBD's effect on cancer cells for California Pacific Medical Center, suggest that these non-psychoactive compounds from the cannabis plant might, in short order, render chemotherapy and radiation distant second and third options for cancer patients. Based on a more recent study, McAllister and Desprez feel that CBD's "could stop breast cancer from spreading."

Dr. Donald Abrams, a cancer specialist and professor of integrative medicine at UCSF, conducted early trials involving THC medical cannabis, and now he is excited about the powerful impacts of CBD on cancer cells. The National Cancer Institute was busy researching this in the 1970s, Abrams explains, but restrictions on the use of cannabis for research in the United States resulted in most of the research on this subject disappearing in the U.S., and being picked up in other countries, such as Israel, Spain and Italy. He says existing studies point to a remarkable ability of CBD to arrest cancer cell division, cell migration, metastasis, and invasiveness.