Stephen Brodie commented on Loren Miller's group Quote Of The Day
"Thomas Jefferson was exactly right on that one. Thanks, Loren I've not heard that…"
38 minutes ago

Chris B commented on Loren Miller's group Quote Of The Day
"I love that one, thanks!"
1 hour ago

Loren Miller commented on Loren Miller's group Quote Of The Day
"Those who expect to be both ignorant and free, expect what never was and never will be. -- Thomas…"
4 hours ago

Understanding Why God-References Are a Big Deal

I remember reciting the pledge wondering, WTF is this god thingy.

Our Humanity, Naturally
A club for humanists
by Dave Niose

"Crisis-Induced Devotion" and the Importance of Church-State Separation

Published on May 19, 2013 by David Niose in Our Humanity, Naturally 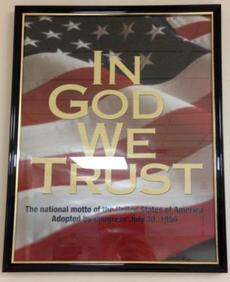 Think back to your school days, when your class would recite the Pledge of Allegiance. If you looked around the classroom during the exercise (and of course most of us did from time to time, even though we were supposed to be focused on the flag), would you see a room filled with fine young patriots, standing upright with hands squarely over hearts, reciting the words with great seriousness and solemnity, pondering the meaning of each phrase?

If your school was like mine, it probably fell a bit short of such a patriotic ideal. Slouched, half-awake students, mumbling the words and giving little thought to their meaning, were as common as the upright patriots. In the lower grades, terms like “allegiance” and “indivisible” were often mispronounced and misunderstood. By high school the exercise had lost much of its mystique, not because kids are unpatriotic, but mainly because the pledge was seen as rote recitation that was required by authority figures.

Perhaps recalling such lackluster attitudes from their school days, some people seem to think governmental religious references are meaningless, not worth disputing. Every now and then, for example, when I'm discussing a church-state issue, someone will throw out a question that has nothing to do with legalities, but instead raises a more practical angle: Why are you fighting over this? Does it really matter? The issue might be "under God" in the Pledge of Allegiance, a crèche on a public park, or "In God We Trust" as the national motto: “What’s the big deal?”

There are many reasons why church-state separation is a big deal (indeed, the fact that a valid constitutional claim is being raised should, in itself, qualify the matter as a legitimate “big deal”), but there is a psychological component to such issues that sometimes gets overlooked amid all the legal analysis. This component, which I call “crisis-induced devotion” (or “CID”), illustrates why governmental religiosity, while sometimes appearing benign and unimportant, is always at least potentially dangerous.