Stephen Brodie commented on Loren Miller's group Quote Of The Day
"Thomas Jefferson was exactly right on that one. Thanks, Loren I've not heard that…"
1 hour ago

Chris B commented on Loren Miller's group Quote Of The Day
"I love that one, thanks!"
2 hours ago

Loren Miller commented on Loren Miller's group Quote Of The Day
"Those who expect to be both ignorant and free, expect what never was and never will be. -- Thomas…"
4 hours ago

Stephen Brodie commented on Davy's group Political Visions.
"I've decided to rejoin the Labour Party after letting my membership lapse after the horrible…"
21 hours ago

Top ten arguments for the existence of God

Do you believe in God? If so, at some point in time, someone convinced you that God does exist. They used one of the ten arguments listed herein. How solid are these arguments and how do they stand up to basic science and reason?

Since the dawn of civilization there have been many arguments for the existence of God. Surprisingly, the vast majority of these arguments fall into the ten or so categories below. Not much has changed in the last 300+ years in terms of new claims or evidence. The same core arguments turn up again and again, often dressed in new clothes (such as "Intelligent Design" or invoking bits and pieces of "Quantum Theory" but they're still the same arguments). How familiar are you with these?

Here are the most popular arguments for the existence of God, along with our critique. You may also notice that many of these arguments are, in themselves, classic examples of logical fallacies.

Before we get to the Top 10, let's take a look at one argument which is fundamental to them all. This is the Argument from ignorance. It would easily take the #1 spot, but it's important to list this first because all other arguments depend upon this useful presuppositional tool.

The "Glue": Argument from Ignorance

a.k.a. God of the gaps, Godidit!, Argument from authority, False dichotomy, Argument from incredulity, Non sequitur, Ad Ignorantiam, Appeal to Ignorance
The Argument from Ignorance is basically a naked assertion: God did it. That's it. Epitomized by the popular American bumper sticker:

Take virtually any aspect of our 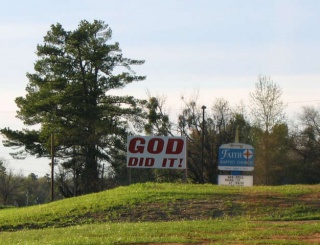 natural world that we don't fully understand (or that both the theist and his audience are not well-informed on), and you'll find a someone claiming God is at the end of that dimly-lit tunnel. Why is there cancer? What causes HIV? Why do people die? Why do bad things happen to good people? Why did that tsunami wreck Indonesia? How did the Red Sox win the World Series? It's God's will. What is the meaning of life? To serve God. Why should we act morally? Because God says so. How did so-and-so survive that horrible accident unscathed? It was a miracle. How did life originate on Earth? Godidit! The Argument from Ignorance is the doorway that lets God into any and all claims.

This isn't so much an argument as it is an unsubstantiated opinion. This claim is made in virtually all other arguments for the existence of god. The theist proposes a scenario that cannot be adequately explained by science or our current level of knowledge, and "fills in the gap" with God. Whenever we don't understand something, we use God as the universal excuse to explain anything unknown.

Obviously, in earlier days, with less universal knowledge, God was more prevalent. As our knowledge expands, these "gaps" become smaller. The battle over evolution is a desperate attempt to widen this ever-tightening gap that theists have claimed is evidence for the existence of God.

The irony is that many claims theists make which create these gaps are ones that could be answered with science and reason. The "morality argument" is a good example. People have been told that without God there are no moral standards and therefore God is the true source of morality. These moral constructs can easily be explained without invoking the supernatural, but because of peoples' ignorance and conditioning, it's easier for them to conclude: it's because of God.

The argument from Ignorance is the "glue" for all other claims, because as you will see, there is no indisputable, tangible evidence of the existence of any God. So the other claims create a scenario where there is something "unknown" or "unexplained" into which the notion of "God" is arbitrarily inserted. If the reader can't offer an immediate legitimate explanation, the Argument from Ignorance suggests by default, God is the answer.

10. Shifting the Burden of Proof

I know God exists. If you disagree, prove otherwise. Oh you say you can't prove God doesn't exist? That's because you know he does!

Extraordinary claims require extraordinary evidence. This is the way the real world and science work. When you say God exists, you are making an extraordinary claim; therefore, the burden of proof is on you to back up your claim. A position that God doesn't exist is not a "belief," it's the standard position we all start out with until we're indoctrinated into religious schools of thought. People aren't born believing in Jesus. They start out atheist: lacking belief. There is no counter-claim necessary. Nobody has to prove the tooth fairy doesn't exist either.

Furthermore, it's technically impossible to prove a negative of this nature. I can no easier prove God doesn't exist than you can disprove my claim that I have an invisible, ethereal unicorn in the trunk of my car. I say I do. It's not my fault he disappears when you look there. Prove he isn't there. You can't.

A famous counter-spin on this argument is the Russell's teapot claim. How do you know there isn't a magical teapot hovering around earth that is responsible for creation? Just because you can't see it, doesn't mean it isn't there.