Loren Miller commented on Loren Miller's group Quote Of The Day
"Freedom is always the freedom of dissenters. -- Rosa Luxemburg It always seems to start out that…"
9 minutes ago 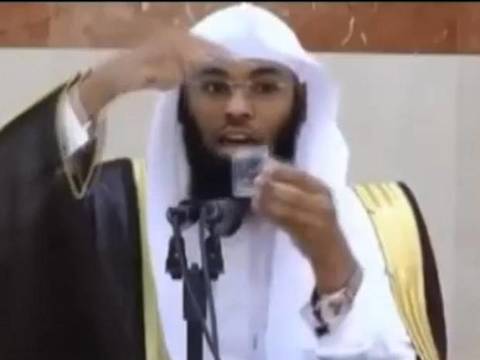 As long as he has a cup, it must be an accurate model

that he is scholar is bad enough, that others might believe him is beyond worse

Lolz doone. The cup is all that is needed.

I'm sure many believe, it's so much easier than thinking. =)

If this is the standard of Muslim cleric we are in big trouble. How can you argue against such nonsense quite obviously the same type of person who dishes out fatwas about infidels

Why is evidence dismissed so easily?

I've been hearing a lot of the flat earth thing lately, & truth to tell, I'm a little stunned!

The joke about about canabalizm and how bozos taste funny fits this one.

Islam has a proud history of understanding the cosmos and navigation.

The History of the Sextant

...In ancient times, the navigator who was planning to sail out of sight of land would simply measure the altitude of Polaris as he left homeport, in today’s terms measuring the latitude of home port. To return after a long voyage, he needed only to sail north or south, as appropriate, to bring Polaris to the altitude of home port, then turn left or right as as appropriate and "sail down the latitude," keeping Polaris at a constant angle.

The Arabs knew all about this technique. In early days, they used one or two fingers width, a thumb and little finger on an outstretched arm or an arrow held at arms length to sight the horizon at the lower end and Polaris at the upper.

In later years, they used a simple device called a kamal to make the observation. The kamal shown here actually is a modern piece that I made, but it’s very much like the ones used a thousand years ago, and probably much earlier. Notice the knots in the cord attached to the carved mahogany transom. Before leaving homeport, the navigator would tie a knot in the cord so that, by holding it in his teeth, he could sight Polaris along the top of the transom and the horizon along the bottom.

To return to homeport, he would sail north or south as needed to bring Polaris to the altitude he’d observed when he left home, then sail down the latitude. Over time, Arab navigators started tying knots in the string at intervals of one issabah. The word issabah is Arabic for finger, and it denotes one degree 36 minutes, which was considered to be the width of a finger. They even developed a journal of different ports that recorded which knot on the kamal corresponded to the altitude of Polaris for each port they frequently visited.

Throughout antiquity, the Greeks and Arabs steadily advanced the science of astronomy and the art of astrology. About a thousand years ago, in the 10th century, Arabs introduced Europe to two important astronomical instruments—the quadrant and the astrolabe.

In the word "astrolabe" - "astro means ‘star’ and "labe" roughly translates as ‘to take’ or 'to find.'

The astronomer's beautiful, intricate and expensive astrolabe was the grandfather of the much simpler, easy to use mariner's quadrant and astrolabe. The mariner’s quadrant—a quarter of a circle made of wood or brass--came into widespread use for navigation around 1450, though its use can be traced back at least to the 1200s.

The quadrant was a popular instrument with Portuguese explorers. Columbus would have marked the observed altitude of Polaris on his quadrant at selected ports of call just as the Arab seaman would tie a knot in the string of his kamal.

Alternatively, the navigator could record the altura, or altitude, of Polaris quantitatively in degrees at Lisbon and at other ports to which he might wish to return. It wasn’t long before lists of the alturas of many ports were published to guide the seafarer up and down the coasts of Europe and Africa.

During the 1400’s, Portuguese explorers were traveling south along the coast of Africa searching for a route to the orient. As a seafarer nears the equator heading south, Polaris disappears below the horizon. So, in southern seas, mariners had to have a different way of finding their latitude. Under orders from the Portuguese Prince Henry, The Navigator, by 1480, Portuguese astronomers had figured out how to determine latitude using the position of the sun as it moved north and south of the equator with the seasons, what we now call its "declination." In simple terms, the navigator could determine his altura, his latitude, by using his quadrant to take the altitude of the sun as it came to it’s greatest altitude at local apparent noon, and then making a simple correction for the position of the sun north or south of the equator according to the date.

The mariner’s quadrant was a major conceptual step forward in seagoing celestial navigation. Like the knots-in-a string method of the Arab kamal, the quadrant provided a quantitative measure, in degrees, of the altitude of Polaris or the sun, and related this number to a geographic position—the latitude--on the earth’s surface. But for all its utility, the quadrant had two major limitations: On a windy, rolling deck, it was hard to keep it exactly vertical in the plane of a heavenly body. And it was simply impossible to keep the wind from blowing the plumb bob off line.

Mariner's astrolabes are now very rare and expensive - less than one hundred are known to survive and most of these are in poor condition having been recovered from ship wrecks...

I can't help but think this is presented as propiganda  to undermine Islamic culture. Imagine Pat Robertson and his group the 700 Club presented as 'knowledge' of western culture.

Nice reminder. Only religion can numb the mind to reality.

And it still hasn't recovered after all these centuries......scary!

Liberty University.  teaches that being human is a sin.

Fundamentalis Abrahamics of any sort seem to  believe that being human is a sin and shameful.

The " Flat earth" was a joke in the Enlightenment period to pick on religionists.

Eratosthenes Found the Diameter of Earth

i love how desperate religious people are getting to were they are trying to disprove something we have already proven. its like when is everyone going to wake up and realize there is no magical big daddy in the sky.