Mrs.B commented on Sydni Moser's group Coffee Break
"At least there's a good photo of him."
28 minutes ago

Ian Mason commented on Sydni Moser's group Coffee Break
"That is so CRUEL, Stephen. Many people must feel unsafe now. I hope the killer is caught soon."
29 minutes ago

Chris B commented on Sydni Moser's group Coffee Break
"The wishes were good but reality is harder. It so hard not to lose the space you need."
1 hour ago

Stephen Brodie commented on Sydni Moser's group Coffee Break
"I want to thank everyone for all the good wishes you have sent me about the mugging. I felt I was…"
1 hour ago

Mrs.B commented on Adriana's group Freethought and Funny Bones
"He's so good at these."
10 hours ago

Stephen Brodie commented on Hope's group Imagine No Organized Religion
"WOTM: Down. But Certainly Not Out."
10 hours ago

Mrs.B commented on Loren Miller's group Quote Of The Day
12 hours ago

Loren Miller added a discussion to the group Gender Blender

I am in recent receipt of a summary of a brief from the U.S. Secular Survey on non-religious LGBTQ…See More
yesterday
1 Comment 1 Like

Loren Miller commented on Adriana's group Gender Blender
"I note that there hasn't been a lot of activity in this particular group in a while.  As…"
yesterday

Mrs.B commented on Adriana's group Freethought and Funny Bones
"All good ones, especially the know-it-all."
yesterday

Basically he's saying if exorcisms are performed more, by casting out the demon, it will balance out the growth in atheism. I guess we're all demon haunted. =)

The Catholic Church’s leading exorcist says he will ask Pope Francis to grant all priests the power to perform the ritual amid what he describes as “a huge demand” for the service.

Father Gabriele Amorth, who claims to have carried out 160,000 exorcisms himself, says he was prompted to make the request after witnessing what he insists was the Pope carrying one out in St Peter’s Square earlier this month.

Francis was filmed placing his hands on the head of a boy sitting in a wheelchair after a Pentecost Mass. 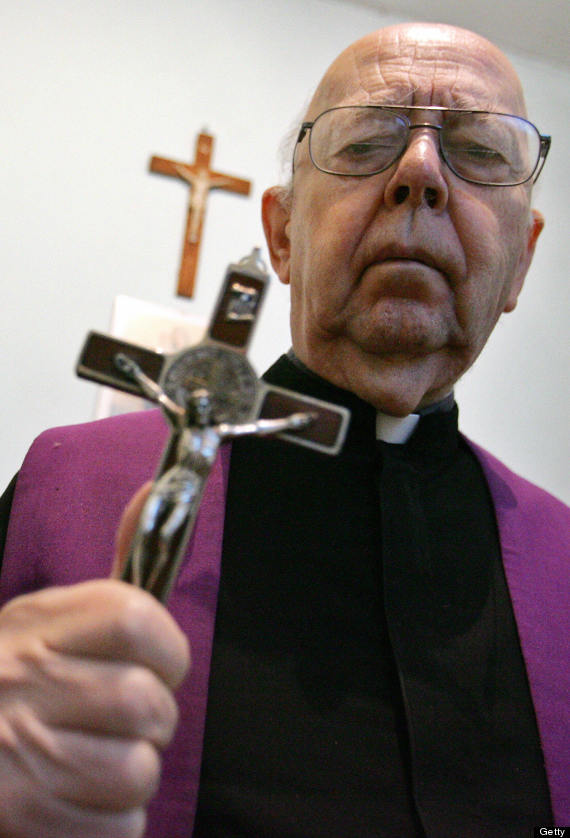 Father Gabriele Amorth claims to have performed 160,000 exorcisms himself
The boy, who was accompanied by a priest, appeared to convulse, with his mouth dropping wide open before exhaling deeply. (Scroll down for video.)

The Vatican played down reports Francis had applied the religious practice of evicting demons, with a spokesman claiming the Pope “didn’t intend to perform any exorcism.”

I don't thnk exorcismcan get rid of me of my very very evil tendencies....

By the way, Pope Francis reminds me a lot of make-believe magicians;  when they perform, it's always some kind of illusion trick...