Mrs.B commented on Loren Miller's group Quote Of The Day
"Disgust for the country is only growing. Back to the back alley abortions, self abortions,…"
53 minutes ago

via The Panda's Thumb..

Had to put this up. Apparently creationists have their own take on the recent findings that Neanderthals interbreed with modern humans.

Svante Paabo who has led the effort to sequence the Neanderthal genome and has a popular book about it writes:

There were many others who were interested in the Neanderthal genome – perhaps most surprisingly, some fundamentalist Christians in the United States. A few months after our paper appeared, I met Nicholas J. Matzke, a doctoral candidate at the Center for Theoretical Evolutionary Genomics at UC Berkeley. Unbeknownst to me and the other authors, our paper had apparently caused quite a flurry of discussion in the creationist community. Nick explained to me that creationists come in two varieties. First, there are “young-earth creationists,” who believe that the earth, the heavens, and all life were created by direct acts of God sometime between 5,700 and 10,000 years ago. They tend to consider Neanderthals as “fully human,” sometimes saying they were another, now extinct “race” that was scattered after the fall of the Tower of Babel. As a consequence, young-earth creationists had no problem with our finding that Neanderthals and modern humans had mixed. Then there are “old-earth creationists,” who accept that the earth is old but reject evolution by natural, nondivine means. One major old-earth ministry is “Reasons to Believe,” headed by a Hugh Ross. He believes that modern humans were specially created around 50,000 years ago and that Neanderthals weren’t humans, but animals.

These are all very interesting links

This is the icing on the cake:

.....transcript from a radio show in which he [meaning Hugh Ross] commented on our work, saying interbreeding was predictable “because the story of Genesis is early humanity getting into exceptionally wicked behavior practices,” and that God may have had to “forcibly scatter humanity over the face of the Earth” to stop this kind of interbreeding, which he compared to “animal bestiality.” -

OMG! This is hilarious! Can somebody explain to me why these ultra-Christian nut cases ALWAYS see sexual perversion in everything? If I wasn't a scientist I'd love to jump to conclusions...

transcript from a radio show in which he [meaning Hugh Ross] commented on our work, saying interbreeding was predictable “because the story of Genesis is early humanity getting into exceptionally wicked behavior practices,” and that God may have had to “forcibly scatter humanity over the face of the Earth” to stop this kind of interbreeding, which he compared to “animal bestiality.” - See more at: http://suvratk.blogspot.com/2014/03/creationist-version-of-neandert... US-based Guyanese bodybuilder, Hugh Ross, has won the Mr. Universe title in his category (Master Over-40) on Saturday in England.
Ross on his Facebook page confirmed this historic achievement. He stated, “Family, friends, fans, all! I gather you have been hearing it through the grapevine so let me now confirm. I am now Mr Universe. Won my category last Saturday night in Southport, UK…”
He continued, by informing that he was enjoying the sights in Europe before returning to New York, “Left there shortly after (the competition) to enjoy some sights Parris & now in Brussels. Next will be Amsterdam before returning to NY. Contest photos will be posted upon my return. Once again, my sincere gratitude for your continued support.”
Ross’ feat is historic for Guyana and him, being the first time that a Guyanese has won the coveted Mr. Universe title in any category. Known for his extremely serious training regimen, the former Guyana Defence Force Special Forces Captain was always on the cusp of big time success. He had previously taken the Musclemania title in the Masters category in 2004 among others and it was only a matter of time for him to add more impressive accolades to his bulging collection.
Kaieteur Sport joins all Guyana in offering heart felt congratulations to Hugh Ross on his outstanding achievement. 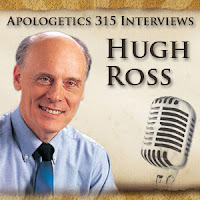 Today's interview is with astrophysicist Hugh Ross, founder and president of Reasons to Believe. He talks about his educational background and how he became a Christian, his approach to defending the faith, two books of God's revelation, the relationship between faith and science, RTB's creation model and how it is tested, the use of cosmological arguments, the integration of philosophy, theology, and science, the age of the earth controversy, critiquing young-earth views, advice for apologists, advice for those in the sciences, and more. Info on RTB chapters is here.

Books by Hugh Ross include:
• Why the Universe Is the Way It Is

• More Than a Theory: Revealing a Testable Model for Creation

• A Matter of Days: Resolving a Creation Controversy

• Genesis One: A Scientific Perspective

• Who Was Adam?: A Creation Model Approach to the Origin of Man

Because they are sexually frustrated because they cannot have fun when they do get it!

Currat and Excoffier’s conclusions are clearly different. Paradoxically, they suggest that Neanderthal-human sex was less successful and probably rarer, but also more widespread. There’s an easy way to find out which idea is correct. If Currat and Excoffier have it right, then Europeans and Asians should have picked up different Neanderthal genes. That’s exactly what John Hawks found. In his own analysis of the Neanderthal sequences, he saw that Europeans and Chinese people seem to carry different Neanderthal genes.

This is a fantastic time to be interested in human origins. We went from humans replacing Neanderthals, to humans mating with them and picking up their genes. We learned that this happened with the Denisovans before humans spread throughout the Pacific. We learned that inter-group sexhappened in Africa before we even left our birth continent. Every passing month complicates the previous picture."

To twist it a bit.

John Yoo denies::  absolutely denies :: that his fear that possibly some humans may be 2% Neanderthal lead to his legal brief to the president that it is ok to torture.

One twisted human being considering his roots!

I find it strange that this Hugh Ross chap doesn't seem to know that even if bestiality does happen nothing can be born of it.

My favorite part is where it says that: God may have had to forcibly scatter humanity over the face of the Earth to stop this kind of interbreeding.

Doone says the Chinese and European Neanderthals have different Neanderthal genes which would suggest that "scattering people" would have encouraged interbreeding.

God may have had to “forcibly scatter humanity over the face of the Earth” - See more at: http://suvratk.blogspot.com/2014/03/creationist-version-of-neandert...

Hilarious that being Neanderthal could suddenly be Sheik,