Ian Mason commented on Sydni Moser's group Coffee Break
"I'm with you on all three counts, Stephen. "
1 hour ago

Mrs.B commented on Sydni Moser's group Coffee Break
"I don't know what I am, other than bored to tears with political things."
5 hours ago

Stephen Brodie commented on Sydni Moser's group Coffee Break
"I'm a republican(Anti-Monarchist) an Atheist and a socialist, so I have been called all sorts…"
6 hours ago

Mrs.B commented on Sydni Moser's group Coffee Break
"Oh yeah, playing that will make such a difference!!!....gimmee a break. We get accused of not being…"
6 hours ago

Mrs.B commented on Sydni Moser's group Coffee Break
"The stuff to make a person feel so proud....[sarcasm]...."
6 hours ago

Stephen Brodie commented on Sydni Moser's group Coffee Break
"Ain't they just! I don't think I've ever seen such a corrupt and bullying government…"
6 hours ago

Mrs.B commented on Hope's group Imagine No Organized Religion
"Those plans can be shoved up where the sun don't shine."
6 hours ago

Stephen Brodie commented on Hope's group Imagine No Organized Religion
"But he has a plan for us. Anyone who uses that excuse should be kicked up the arse. And then be…"
6 hours ago

Mrs.B commented on Loren Miller's group Quote Of The Day
"Forever is a looooooong time to wait...."
8 hours ago

Loren Miller commented on Loren Miller's group Quote Of The Day
"During my sojourn in ironclad atheism, the primary arsenal leveled against Christianity had been…"
14 hours ago

Chris B replied to Grinning Cat's discussion Camo Cats in the group Atheist Cat Servants
"a beauty!"
21 hours ago

Bangladesh police have arrested three atheist bloggers for defaming Islam and the prophet Mohammed, amid demands from religious fundamentalists for an Internet crackdown.

Atheists arrested for being atheists. That's what theists all around the world would love to see, since their petty little gods can't take a little reality. 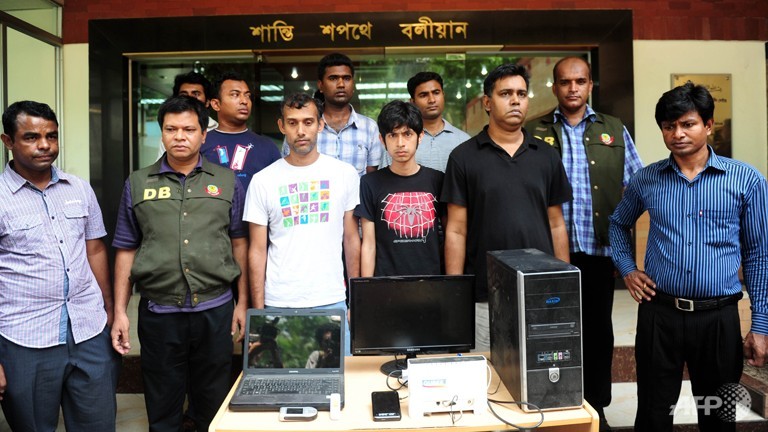 The arrest of the three, who were paraded in handcuffs at a news conference, followed pressure from Islamists who have organised a march from all over the country to the capital to demand the death penalty for atheist bloggers.

"They have hurt the religious feelings of the people by writing against different religions and their prophets and founders including the Prophet Mohammed," said deputy commissioner of Dhaka police, Molla Nazrul Islam.

The three could face 10 years in jail if convicted under the country's cyber laws which outlaw "defaming" a religion, Islam said.

This is beyond crazy. If these supposed gods are all powerful, why do the minions have to fight for them? Why can't they just let atheists be?

Because they do not believe the same bullshit as they believe!

we have got to fight these people who call for laws around the world against insulting religions and hurting the feelings of beleivers very insidious.

If you can't say jesus sucks, no real freedom exists. =)

From Wikipedia, the free encyclopedia
Islam is the largest religion of Bangladesh, the Muslim population is approximately 148.6 million, which is the fourth largest Muslim population in the world (after Indonesia, Pakistan and India), constituting 90.4% of the total population as of 2010. Religion has always been a strong part of identity, but this has varied at different times. A survey in late 2003 confirmed that religion is the first choice by a citizen for self-identification; atheism is extremely rare. Bangladesh is a secular state, however the United Nations has recognised the country as mainly moderate Muslim democratic country.
Islam was introduced to Bengal during the Rashidun Caliphate in the 8th century, mainly by the arrivals of Arab and Persian missionaries and merchants, and conquests of the region. One of the notable Muslim saints was Shah Jalal. He arrived in the region of Sylhet in 1303 with many other disciples to preach the religion to the people.