Mrs.B commented on Loren Miller's group Quote Of The Day
"Disgust for the country is only growing. Back to the back alley abortions, self abortions,…"
51 minutes ago

2nd Child of Pa. Couple Dies After Only Praying

This will be a story to watch. After letting one child die from useless prayers, they do it to another. They were on probation from the first killing, they better get life or this one. If they don't, what does it say about religion in America? Do we allow stupid to run free because of their faith? 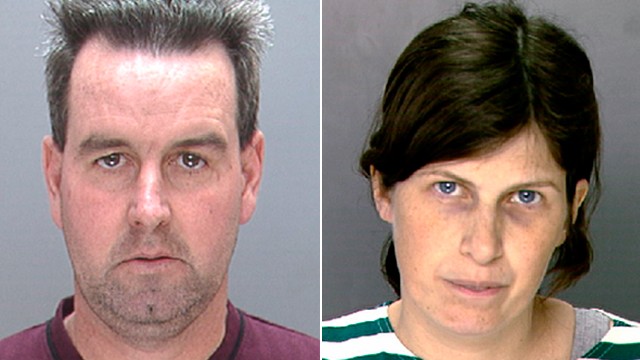 Herbert and Catherine Schaible are shown in these booking photos. (Philadelphia Police Department/AP)

PHILADELPHIA April 23, 2013 (AP)
A Philadelphia couple — serving 10 years' probation for the 2009 death of their toddler after they turned to prayer instead of a doctor — has violated their probation now that another of their children has died.

Herbert and Catherine Schaible belong to a fundamentalist Christian church that believes in faith-healing.

Stevie Wonder Provides Live Soundtrack on 'DWTS' Watch Video
Philadelphia Judge Benjamin Lerner said at a hearing they violated the most important condition of their probation: to seek medical care for their remaining children.

Authorities have yet to file criminal charges in the death of the 8-month-old boy last week, after he suffered with diarrhea and breathing problems for days. But charges could be filed once authorities pinpoint how the baby died.

The couple is on probation after a jury convicted them of involuntary manslaughter in 2010 in the death of their 2-year-old son, Kent, from pneumonia.

Yes, and now they'll be searching their own soul forever, trying to discover why their God didn't answer those prayers. According to the Christian scheme, the fault must lie somewhere with an unrepentant and unavowed sin. Too bad the idea of 'there is no god' will not cross their mind, ever*.

*Qualifying 'ever': let's say the probabilities are very low, near zero.

Yes, god is real, so the fault must lie with them or the child. Perhaps it's one of those special "plans" god has for them. Regardless, they apparently don't understand that what they are doing is wrong. We can fix that, lock the dumb fucks up forever. Then if nothing else, god's approval becomes meaningless and society's disapproval will be with them for the rest of their dumb ass lives.

This is of course, horribly depressing. But how are parents like this allowed to keep their second baby? They showed they could not care for the first child, they let him die. I wonder if the excuse for the death of the first one had not been religious, they would have been allowed to care for the younger child.

I assume that by religious you mean Christian. If that had been done in a Muslim or Voodoo context - or in any other creed/religion/cult for that matter - they would probably still be in jail for the death of the first one.

And these people are shielded by their congregation; how can you prevent these people from procreating? And how do you get a court order to seize the baby once they have?

If in the U.S., or maybe other western country, they would be. Maybe they'd stop procreating if they made love in the light. (bad Neal).

Yes, I meant Christian or Jewish. Muslim would have been OK, too, before Al Qaeda. Americans have an intrinsic respect for all religions, at least all monotheistic religions. The respect for Islam disappeared because of political conflicts, and after 9/11, well, it became Islamophobia.