Mrs.B commented on Loren Miller's group Quote Of The Day
"Odd, that."
2 hours ago

Loren Miller commented on Loren Miller's group Quote Of The Day
"I see Atheists are fighting and killing each other again, over who doesn't believe in any God…"
8 hours ago

Chris B commented on Sydni Moser's group Green Gardening
"It's still cool for the time of year, but our roof garden got a good soak from a week of rain.…"
15 hours ago

Stephen Brodie commented on Randall Smith's group Just sports stuff.
"Yes Randall Chelsea have reached both the national FA Cup final and the best is they have…"
23 hours ago

This is not really novel, BUT as a scientist, I'm a big fan of studies, numbers, statistics, etc. Especially if the study has a big "n", like this one. About 500,000 people were evaluated in this study. Eat your fruit and veggies, people, and leave the pigs alone. You'll be healthier, and there will be less animal suffering, less environmental damage as well. Win-win! 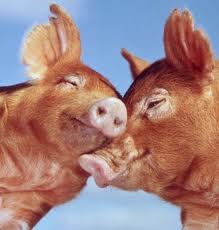 Mar. 7, 2013 — In a huge study of half a million men and women, research in Biomed Central's open access journal BMC Medicine demonstrates an association between processed meat and cardiovascular disease and cancer.

One of the difficulties in measuring the effect of eating meat on health is the confounding effect of lifestyle on health. Often vegetarians have healthier lifestyles than the general population, they are less likely to smoke, are less fat, and are more likely to be physically active. Only within a very large study can the consequences of eating meat and processed meat be isolated from other lifestyle choices.

This EPIC (European Prospective Investigation into Cancer and Nutrition) study involved ten countries and 23 centres in Europe and almost half a million people. In general a diet high in processed meat was linked to other unhealthy choices. Men and women who ate the most processed meat ate the fewest fruit and vegetables and were more likely to smoke. Men who ate a lot of meat also tended to have a high alcohol consumption.

A person's risk of premature death (increased risk of all cause mortality) increased with the amount of processed meat eaten. This is also true after correcting for confounding variables, although residual confounding cannot be excluded. However, a small amount of red meat appeared to be beneficial which the researchers suggest is because meat is an important source of nutrients and vitamins.

Prof Sabine Rohrmann, from the University of Zurich, who led this analysis explained, "Risks of dying earlier from cancer and cardiovascular disease also increased with the amount of processed meat eaten. Overall, we estimate that 3% of premature deaths each year could be prevented if people ate less than 20g processed meat per day."