Betty Bowers, America's Best Christian, has taken note of some of the less than pious activities being entertained by those who would simultaneously have us believe they are WAY holier than thou.  Considering the recent revelations regarding FORMER Liberty University president, Jerry Falwell, Jr., his nomination would seem to be a total automatic, especially taking into account that picture making the rounds with him and some cookie in something less than formal attire!

I should note, though, that his wife, Becki, doesn't seem to be interested in living in Jerry's shadow, and this article from The Friendly Atheist certainly makes a case for her being considered for the next pick of Fake Christian of the Month.

Have You Had YOUR Betty Today?

Well said! (Mostly.) I disagree with the "fake" label. Yes, it's a shorthand for "flouting the very 'Christian values' they preach" and for "do as I say, not as I do" -- especially when it comes to students and lesser staff at Liberty University, who'd be expelled or fired for similar behavior coming to light!

But there are many Christianities (as there are many Judaisms, many Islams, and so on). The Falwell's "extracurricular activities" (but not their hypocrisy!) reminded me of Dean and Christy Parave, bodybuilders who founded a "Fitness Swingers" website and who see swinging as a way to evangelize.

(As Dave Barry would say, I am not making this up.)

"Dean and I are both in agreement with this lifestyle, so we're not committing adultery. God put people on the earth to breed and enjoy each other – I feel God is always with me and he has put us here for a reason."

(And that's a rather humanistic understanding of marriage and adultery, not supported by the plain text of the Bible! Perhaps many of us simply know better!...) 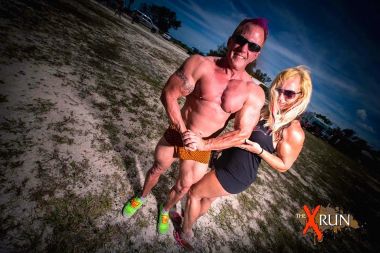 (And that also made me think of Wicca, which sees itself as a way, not the way, and which has its Goddess saying that "all acts of love and pleasure are My rituals." Perhaps one of the more benign invisible friends people have imagined, unlike some we keep hearing about, like it or not...)