Stephen Brodie commented on Randall Smith's group Just sports stuff.
"Randall I knew I was talking to a proper sports fan. It's like looking into a mirror. I…"
1 hour ago

Mrs.B commented on Loren Miller's group Quote Of The Day
"Odd, that."
5 hours ago

Loren Miller commented on Loren Miller's group Quote Of The Day
"I see Atheists are fighting and killing each other again, over who doesn't believe in any God…"
10 hours ago

Chris B commented on Sydni Moser's group Green Gardening
"It's still cool for the time of year, but our roof garden got a good soak from a week of rain.…"
17 hours ago

Stephen Brodie commented on Sydni Moser's group Coffee Break
"You can't beat live music, and to listen to an orchestra is wonderful."
22 hours ago

Mrs.B commented on Sydni Moser's group Coffee Break
"You DEMAND we open our border???!!! How about you get your case numbers down to zero first, &…"
22 hours ago

Stephen Brodie commented on Randall Smith's group Just sports stuff.
"Yes Randall Chelsea have reached both the national FA Cup final and the best is they have…"
yesterday

Mrs.B commented on Sydni Moser's group Coffee Break
"Oh you must have had a great time Ian!!! I LOVE Rhapsody In Blue!!!"
yesterday

Muslim scientist's life is threatened because he accepts evolution

Of course not all Muslims are crazy violent people like the ones who threatened Dr. Usama Hasan, but these type of developments always sadden me, and make me angry. Why is it always the fundamentalists who scream the loudest? They should be drowned by a chorus of moderate voices. It is also very disturbing to see the scourge of creationism infecting other fundamentalist religionists, not just crazy US Christian fundamentalists.

By Tom Peck and Jerome Taylor

A prominent British imam has been forced to retract his claims that Islam is compatible with Darwin's theory of evolution after receiving death threats from fundamentalists.

Dr Usama Hasan, a physics lecturer at Middlesex University and a fellow of the Royal Astronomical Society, was intending yesterday to return to Masjid al-Tawhid, a mosque in Leyton, East London, for the first time since he delivered a lecture there entitled "Islam and the theory of evolution".

But according to his sister, police advised him not to attend after becoming concerned for his safety. Instead his father, Suhaib, head of the mosque's committee of trustees, posted a notice on his behalf expressing regret over his comments. "I seek Allah's forgiveness for my mistakes and apologise for any offence caused," the statement read.

The campaign is part of a growing movement by a small but vocal group of largely Saudi-influenced orthodox Muslims who use evolution as a way of discrediting imams whom they deem to be overly progressive or "western orientated".

Masjid Tawhid is a prominent mosque which also runs one of the country's largest sharia courts, the Islamic Sharia Council. In January, Dr Hasan delivered a lecture there detailing why he felt the theory of evolution and Islam were compatible – a position that is not unusual among many Islamic scholars with scientific backgrounds. But the lecture was interrupted by men he described as "fanatics" who distributed leaflets claiming that "Darwin is blasphemy".

"One man came up to me during the lecture and said 'You are an apostate and should be killed'," Dr Hasan told The Independent. "I want to go back – I've been going to the mosque for 25 years. It is my favourite mosque in London, and I have been active in the community for a long time. I hope my positive contribution will outweigh their feelings towards me."

But the imam's apology seems to have done little to resolve the matter. Earlier this week, the group issued a statement saying that Dr Hasan had been dismissed from his position as vice-chairman and imam at the mosque, and describing his views as a "source of antagonism in the Muslim community". Neither he nor his father were present at the meeting that voted for his dismissal.

Evolution "is not a matter of iman [belief] or kufr [disbelief]," said Dr Hasan, "and people are free to accept or reject a particular scientific theory." He also attacked clerics who made pronouncements about science they didn't understand, declaring that "any such fatwas about science from people ignorant of the subject matter are null and void."

Like Christianity, Islamic opinion is divided over evolution. More than a millennium before Darwin, Muslim scientists had posited ideas about species survival and generational change that bore striking similarities to Darwin's eventual theory.

Most Islamic scholars have little problem with evolution as long as Muslims accept the supremacy of God in the process. But in recent years a small number of orthodox scholars, mainly from Saudi Arabia – where many clerics still preach that the Sun revolves around the Earth – have ruled against evolution, declaring that belief in the concept goes against the Koran's statement that Adam and Eve were the first humans.

Permalink Reply by Doone on March 7, 2011 at 3:26pm
Why couldn't Mohammed make up his own bad stories " Adam and Eve were the first humans."

You can also see this in a whole society, Pakistan, where a minority is silencing the majority moderates.

Permalink Reply by Hope on March 7, 2011 at 3:43pm
Some Muslims whom scientist, believe in the theory of evolution when it is applied on other animals only, not human species..that's because of what the Koran says about Adam and Eve.
but the majority of them reject the whole evolution theory.

All one would have to do to make religion and evolution compatible, if people really wanted o do this, is simply call Adam "Y chromosome Adam" and Eve "Mitochondrial Eve" and everyone is happy :-) 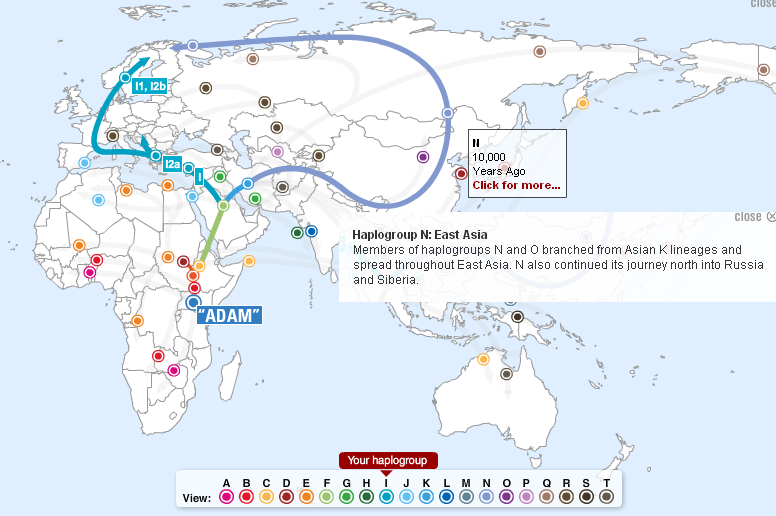 Permalink Reply by Hope on March 7, 2011 at 4:18pm
@ Adriana and Doone, thanks for these great Information!