Mrs.B commented on Adriana's group Freethought and Funny Bones
"Yeah, when a person keeps their eyes covered too."
3 hours ago

Loren Miller commented on Loren Miller's group Quote Of The Day
"God is just a sick, sexually frustrated bully who likes to jerk off to us while we cry. -- Steve…"
20 hours ago

Andi Quinn left a comment for Stephen Brodie
"Hi Stephen, Thank you! It's so nice to find a community of atheists!"
Friday 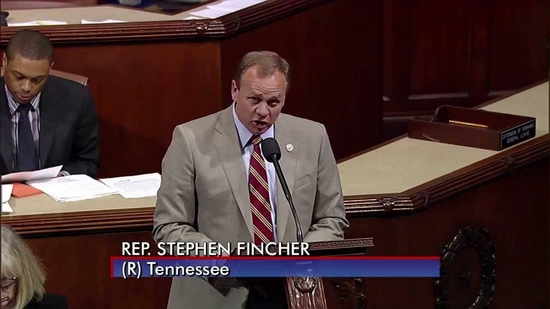 Stephen Fincher, a deranged Republican congressman from Tennessee, is very angry that the federal government is committed to preventing poor people from starving to death:

Republican Congressman Stephen Fincher of Tennessee, who supports cuts to the program, had his own Bible verse from the Book of Thessalonians to quote back to Vargas: “The one who is unwilling to work shall not eat,” he said.

The program in question is SNAP, better known as food stamps. Fincher and his ultra-right-wing friends in the House are furious about the fact that the worst economic crisis in 80 years has resulted in more Americans needing food stamps. The whole point of programs like SNAP and other automatic stabilizers, of course, is that they kick in when the economy is struggling and people need help. Fincher is shocked and horrified by this heinous policy of ensuring that poor people and their children don't starve. Food is to be earned! Sure, this is the richest country in the history in the world, but if we provide our citizens with food to eat, then freedom is obviously dead.

He fulminates about people who are allegedly "unwilling to work" sucking off the government teat with impunity. This is a patently dishonest representation of the SNAP program. Most people who receive food stamps cannot be dismissed as losers who are "unwilling to work." Nearly half (47%) of all food stamp recipients are children. Another 8% are 60 years of age or older. The "working poor" - people who live in a household with income from work - represent another 41%. Between children, the elderly, the working poor, and people who want a job but cannot find one - someone should tell Fincher that there are still more than 3 unemployed job seekers for every 1 opening - that leaves very few people who can be accurately described as being "unwilling" to work. It's also worth noting that the average monthly SNAP benefit is a whopping $287. It takes a deeply disturbed person to crusade against providing this class of people with food to eat, when the economy is this battered, and when the broad economic benefits of the program have been so well established (at least in the reality-based community).

You are so right. Apparently he's just the latest to open mouth, speak nonsense.