Michigan, what has happened to you? 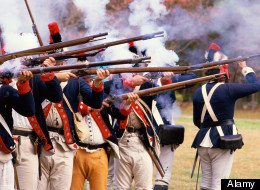 Conservatives were united in their disappointment over the Supreme Court's upholding of President Barack Obama's health care law on Thursday. But one former GOP spokesman took things a bit further than the near-uniform vows to repeal the legislation.

Matt Davis, a Michigan attorney who was once the state Republican Party's spokesman, sent out an email that asked whether armed rebellion would be justified in the wake of the court's decision. According to Michigan Capital Confidential, a local news service that originally reported the missive, Davis sent it "moments after the Supreme Court ruling to numerous new media outlets and limited government activists."

Davis' email begins: "Implicit in Benjamin Franklin's fabled response at the conclusion of the Constitutional Convention was a dire warning: That the Republic would one day devolve into tyranny unless we the people prevented it."

It goes on to characterize Obama's election as the end point of a "100-year progressive trek to tyranny" before questioning whether a good old-fashioned uprising would be the best means to overturn the president's signature domestic policy. The key paragraph:

If government can mandate that I pay for something I don't want, then what is beyond its power? If the Supreme Court's decision Thursday paves the way for unprecedented intrusion into personal decisions, then has the Republic all but ceased to exist? If so, then is armed rebellion today justified?

Always the same story. I found another article that includes this imbecile with 9 others, all saying pretty fucked up shit. Will post.

We are Ready Mr Davis! American Animals are Armed and Dangerous!