Stephen Brodie left a comment for Richard Levison
"Richard of course we are going to disagree, but that's no big deal. "I'm just…"
5 hours ago

Loren Miller commented on Loren Miller's group Quote Of The Day
"People wrap themselves in their beliefs. And they do it in such a way that you can't set them…"
19 hours ago

Richard Levison left a comment for Stephen Brodie
"Hello Stephen! Despite your objections to the contrary my latest photo dedicated to you will not be…"
23 hours ago

Mrs.B commented on Adriana's group Freethought and Funny Bones
"Yeah, when a person keeps their eyes covered too."
yesterday

Loren Miller commented on Loren Miller's group Quote Of The Day
"God is just a sick, sexually frustrated bully who likes to jerk off to us while we cry. -- Steve…"
yesterday

"Richard, remember this from the recent past?  "Don't drink the cool-aid" "
Friday

Loren Miller left a comment for Andi Quinn
"Greets, Andi, and welcome!  I hope you enjoy your time here."
Friday

This photo is dedicated to our Atheist member Stephen.
Friday
2 Comments 0 Likes

Loren Miller commented on Loren Miller's group Quote Of The Day
"The existence of God is not subjective. He either exists or he doesn’t. It’s not a…"
Friday

Congress shall make no law respecting an establishment of religion - Unless you live in Indiana.

Indiana, being the Alabama of the north, is front and center this week. Governor with presidential ambitions Mike Pence signed into law the "Religious Freedom" act. Basically vilified by all those who are part of the thinking human race, it is just foolishness meant to excuse those who wish not to participate in modern commerce, and for those who believe recognizing our shared common humanity is simply horrible. An Indiana business owner went on a local radio station and said that he had discriminated against gay or lesbian couples even before Gov. Mike Pence (R) signed a law on Thursday protecting business owners who decide to discriminate for “religious liberty” reasons. He then defended the practice and suggested he would do it again.

The business owner, who would not give his name or the name of his business, said he had told some LGBT “people” that equipment was broken in his restaurant and he couldn’t serve them even though it wasn’t and other people were already eating at the tables. “So, yes, I have discriminated,” he told RadioNOW 100.9 hosts. The hosts were surprised the owner said he was okay with discriminating.

“Well, I feel okay with it because it’s my place of business, I pay the rent, I’ve built it with all my money and my doing. It’s my place; I can do whatever I want with it, “he said. “They can have their lifestyle and do their own thing in their own place or with people that want to be with them.”

Even the Indiana Chamber of Commerce, which in no way is a liberal institution, understood the loss of revenue this bill heralds. Apple, Yelp, the NCAA, and so many more, are already talking about not doing business in the state.

Yet this is possibly the best news I've heard in a while. There are other states ready to follow Indiana's lead regardless of the consequences. Maybe we couldn't rationally stop the spread of stupid, but it appears we can now bankrupt it.

This law is simply moronic and immoral. It's the contemporary equivalent of allowing for "whites only" establishments.

I'm so happy that the times have changed so much that now the demise of these bigots is going to come through damage to their economy.

The backlash continues to grow as Pence doubles down and says the law is fine as it is. Washington state and Connecticut both boycotting the state, AFSCME has cancelled their women's conference, Pro athletes jumping in; apparently no on likes this but bigots. Make them pay the price. There is a boycott of Indiana products starting to make its way around as well. The picture above looks very much like the usual suspects the religious mafia.

But doesn't Governor Pence look a dick among those people, he must have known how he would have come across to all decent minded people.

What's the source for this image?

All this from the "In God We Trust" license plate state. 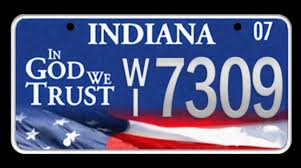 A very slippery slope this law, and other moves by the Christian right has to be fought against.

I cant imagine this will be allowed to stand the, State cant be that stupid.

Apparently the Governor of Indiana has stepped back after public, and private outrage. In the end though blind belief in bronze age thinking has to end to enable life to exist on earth.

Yet his "step back" was not complete. Today I heard that provisions still remain for pharmacists not having to provide HIV medicines etc.

How very Christian of them-wow what idiots

Are you saying that there us still a 'gay' thing going on?

Or even worse that sex is illegal?

It's terrible that Ebola, AIDS, and other diseases of the sort that are transmitted and stigmatized.

It's tragic how disease has hit us and the medical community needs more support to help.