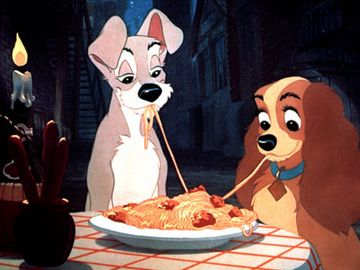 No, it's not my dog Lola who says that, although she vehemently agrees, pizza, pasta, bagels and bread being some of her favorite treats. A new genomic study by Swedish researchers, comparing the DNA of dogs of 14 different breeds to the DNA of wolves, have identified some genomic regions that are common to all these dog breeds, but are not present in the wolves. Many of these regions contain genes involved in brain development and function, probably related to dog's friendliness towards humans as well as their uncanny ability to read our moods, understand our language and body language, follow our fingers pointing to stuff, etc. But they also found 10 genes that help dogs digest starches. Since we humans also evolved the capacity to better digest starches (and fats), around the time agriculture started, this is a great example of co-evolution. I think it's a beautiful story: best friends sharing meals evolved together. Tonight I'm cooking pasta and will give my dogs some too. So all those ultra-expensive dog foods claiming to mimic exactly the wolf diet and be the best for dogs, are probably a waste of money.

Dog's dinner was key to domestication No need to push back on your favorite pet's appetite for carbs: dogs appear to have evolved to digest starches.

Dogs now have an excuse for waiting under the dinner table: domestication may have adapted them to thrive on the starch-filled foods that their owners eat.

A study published in Nature1 today finds that dogs possess genes for digesting starches, setting them apart from their carnivore cousins — wolves.

The authors say the results support the contentious idea that dogs became domesticated by lingering around human settlements. “While it’s possible that humans might have gone out to take wolf pups and domesticated them, it may have been more attractive for dogs to start eating from the scrap heaps as modern agriculture started,” says Kerstin Lindblad-Toh, a geneticist at Uppsala University in Sweden, who led the work.

Canine-domestication researchers agree that all dogs, from beagles to border collies, are the smaller, more sociable and less aggressive descendants of wolves. But neither the time nor the location of the first domestication is known: fossils place the earliest dogs anywhere from 33,000 years ago in Siberia to 11,000 years ago in Israel, whereas DNA studies of modern dogs put domestication at least 10,000 years ago, and in either Southeast Asia or the Middle East. Many researchers believe that dogs were domesticated more than once, and that even after domestication, they occasionally interbred with wild wolves.

Lindblad-Toh and her team catalogued the genetic changes involved in domestication by looking for differences between the genomes of 12 wolves and 60 dogs from 14 different breeds. Their search identified 36 regions of the genome that set dogs apart from wolves — but are not responsible for variation between dog breeds.

Nineteen of those regions contained genes with a role in brain development or function. These genes, says Lindblad-Toh, may explain why dogs are so much more friendly than wolves. Surprisingly, the team also found ten genes that help dogs to digest starches and break down fats. Lab work suggested that changes in three of those genes make dogs better than meat-eating wolves at splitting starches into sugars and then absorbing those sugars. 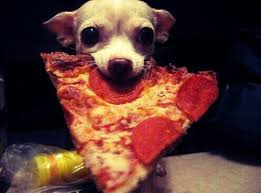 There is an endless supply of images of dogs eating pizza and pasta if you google them. They're all so funny.

Dog Soldiers: They have barrelled into the fiercest battles of history. They have risked their lives for fallen comrades. They have remained loyal until death – guarding, encouraging, fighting until all, but their spirit, was lost. Dogs have certainly proved effective in battles throughout history. As weapons of wars they have been ferocious, courageous and intelligent. But it is their spirit, that undying and ever-faithful spirit that has inspired men in arms and rallied them during history’s bloodiest battles. When their effectiveness as weapons of war past they continued contributing to the fight – guarding the men, inspiring them, helping them to communicate.

Aim to Please: Perhaps it is their pack nature or willingness to please their human counterparts that have made them so essential in battle, but since the dawn of warfare they have plunged headfirst into the fight. The Romans were not the first, but may very well have used war dogs the most effectively. The Roman Army had whole companies composed entirely of dogs. They wore spiked collars around their neck and ankles, made more dangerous by the large curved knives protruding from its ring. Sometimes they were starved before battle, then unleashed on an unsuspecting enemy. Their dog of choice was the great Molossian dogs of Epirus, specifically trained for battle. These dogs, halved starved and ferocious, helped spread the Roman Empire across the ancient world. They dominated battles until they meet their match in the Britain, where powerful Mastiffs called Pugnaces Britanniae had been born and breed.

Born to Win: Gratius Falsius, an ancient Roman author and historian, wrote of these frightful canines in the 8 AD. They were physically unspectacular, but renowned and feared on the battlefield. The Roman Molossians were no match. Gratius writes, “Although the British dogs are distinguished neither by color nor good anatomy, I could not find any particular faults with them. When grim work must be done, when special pluck is needed, when Mars summons us to battle most extreme, then the powerful Molossus will please you less and the Athamanen dog cannot measure up to the skill of the British dog either. ”

Seeing first hand their effectiveness in battle, the Romans quickly began employing these dogs in the Empire’s service. They were set loose across the ancient world - trained, ravenous, and fiercely loyal

My Smoky and Fluffy, German Shepards, Labrador crosses. Would look at me askance when they got dry dog food instead of their usual meal of vegie peelings, and rice boiled together with dry dog food so it soaked up the liquid plus the scraps from that nights tea if there were any. Though they both enjoyed a good big beef bone to chew on as well.

My missus's dog Timothy, who actually lives with her mother,  loves chocolate covered sweets, chocolates and other sweet foods as well as whatever your eating as well.

Yes, dogs love "wet" food. I feed mine dry dog food but I mix it in with corned beef or some other moist meat, and water, and they love that. When we eat pasta or pizza or bagels, we always save a bit for them, they enjoy those foods as "treats"

Watch out for chocolate, dogs can actually get intoxicated by it if they eat too much. That Timothy is one spoiled dog! :-)

He is! Although he is a terrier of indeterminate breed he is a gusty dog and lets you know when someone is lurking around.

I don't let him have that much chocolate nor does the missus.

I love terriers! They are very brave, feisty and fun.

They are also good ratters too!

An excellent article on this discovery by John Hawks. It's a bit technical, very very good, fascinating read.

Selection is for the dogs

I was really pleased to see the new paper by Erik Axelsson and colleagues [1] on the pattern of recent selection on domesticated dogs. As we began working on recent selection in humans, we expected that domesticated animals might exhibit similar patterns genome-wide. They are among the organisms most similar to humans in demography and ecological change: Domesticated animals have all undergone rapid shifts in diet, predator ecology and social dynamics after domestication, at the same time that they have experienced rapid increases in population size. That is a recipe for rapid adaptive evolution.

As in humans, the paper shows that dogs were selected strongly for a new agricultural diet. Just as in humans who descend from early agriculturalists, dogs have extensive duplication of the amylase gene. Humans express amylase in saliva, but dogs only produce amylase in the pancreas, where it digests starches in the pancreas. Where this paper gets really exciting is when the authors began to investigate the entire metabolic pathway underlying starch digestion. The amylase gene AMY2B underwent duplications similar to those in humans, and not found in wolves. Two other genes that interact in starch digestion and glucose uptake did not undergo duplication but do show near-fixed haplotypes in dogs that are absent or very rare in wolves, and the paper shows using both biochemistry and phylogenetic comparison with herbivores and omnivores that the dog versions of these genes increase enzymatic activity on starches and glucose uptake.