Stephen Brodie commented on Sydni Moser's group Coffee Break
"I know yeah. The British are encouraged to turn on people who believe in fairness and decency…"
7 hours ago

Stephen Brodie commented on A Former Member's group CRITICAL THINKING
"Kurt now that's a hard one to answer. Our only hope I think is to teach our children not…"
7 hours ago

Loren Miller commented on Loren Miller's group Quote Of The Day
"No one can sit at the bedside of a dying child and still believe in God. -- Bertrand Russell No…"
17 hours ago

RichardtheRaelian left a comment for Abby.60100
""Happy Birthday!""
23 hours ago

Mrs.B replied to Andy Stout's discussion Magats in the meat... The cure may have arrived!
"Always been atheist, despite being in moronism, until I rebelled & refused to go."
yesterday

Andy Stout replied to Andy Stout's discussion Magats in the meat... The cure may have arrived!
"I trust you are also a fellow atheist. We Canadians are certainly "blessed" to live in a…"
yesterday

Dogs and "theory of mind" 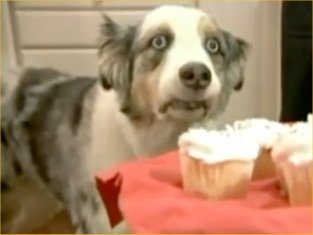 Those of us who are owned by dogs suspect that our dogs know that we have minds, and sometimes really know what we are thinking, since they are so empathic. But proving this scientifically is something else. Now a psychologist has published some evidence in the journal Animal Cognition, strongly suggesting that dogs see our human perspective and act accordingly, by setting up experiments with dozens of dogs, who were told by their owners not to touch some food left on a table, in various light conditions. The dogs were much more likely to steal the food if the room was dark, suggesting that they do understand that we can't see what they are doing if it's dark. That means they understand the human perspective.

Feb. 11, 2013 — Domestic dogs are much more likely to steal food when they think nobody can see them, suggesting for the first time that dogs are capable of understanding a human's point of view.

Many dog owners think their pets are clever or that they understand humans but, until now, this has not been tested by science.

Dr Juliane Kaminski, of the University of Portsmouth's Department of Psychology, has shown that when a human forbids a dog from taking food, dogs are four times more likely to disobey in a dark room than a lit room, suggesting they take into account what the human can or cannot see.

This is the first study to examine if dogs differentiate between different levels of light when they are developing strategies on whether to steal food. It is published in the journal Animal Cognition. The research was funded by the Max Planck Society, Dr Kaminski's former employer.

Dr Kaminski said: "Humans constantly attribute certain qualities and emotions to other living things. We know that our own dog is clever or sensitive, but that's us thinking, not them.

"These results suggest humans might be right, where dogs are concerned, but we still can't be completely sure if the results mean dogs have a truly flexible understanding of the mind and others' minds. It has always been assumed only humans had this ability."

The research is an incremental step in our understanding of dogs' ability to think and to understand which could, in turn, be of use to those working with dogs and those who keep them as pets.

Dr Kaminski ran a series of experiments in varied light conditions. In each test, a dog was forbidden by a human from taking the food. When the room was dark, the dogs took more food and took it more quickly than when the room was lit.

The tests were complex and involved many variables to rule out that dogs were basing their decisions on simple associative rules, for example, that dark means food.

There is no evidence on how well dogs can see in the dark, but the results of this research show dogs can differentiate between light and dark.

Dr Kaminski said: "The results of these tests suggest that dogs are deciding it's safer to steal the food when the room is dark because they understand something of the human's perspective.