Loren Miller commented on Sydni Moser's group Coffee Break
"After it was clear that the outcome of the OSU – Indiana game was pretty well settled, I…"
1 hour ago

Loren Miller commented on Loren Miller's group Quote Of The Day
"A Well-Informed Electorate Is a Prerequisite for Democracy. --Thomas Jefferson Very true ... but…"
2 hours ago

Mrs.B commented on Julien's group The Music Box
7 hours ago

RichardtheRaelian left a comment for Stephen Brodie
"Hi Stephen! My mom's favorite movie was Blade Runner as well."
9 hours ago

"My favorite movie is The Lathe of Heaven."
16 hours ago

Mrs.B commented on Loren Miller's group Quote Of The Day
"Jumbled is the way I read it."
19 hours ago

Loren Miller commented on Loren Miller's group Quote Of The Day
"I dared, for the first and last time in my life, to express a theological conclusion: "But how…"
yesterday

Chris B commented on Sydni Moser's group AGING ATHEISTS
"Using that one, Ian! For when I'm older..."
yesterday

The movie Avatar expresses itself well from the movie made in 1972.A year before the prophet Rael…
yesterday
3 Comments 0 Likes

I'm a HUGE science-fiction fan (not the movies, the books) and I stumbled upon this list of 1960s classics everyone should have read and was reminded again of how little I know even if I have a wall covered floor to ceiling with shelves full of scifi books.

I had only read three books on that list...

Here Are the 1960s Science Fiction Novels Everyone Should Read

First they tried to drag us back to the 1960s with Austin Powers. Now they're doing it again with Men in Black III, whose plot time-jumps to the 1969 Apollo launch. But why go back to this world-changing decade with bad science fiction when you could mainline the good stuff? Here is a book list that will introduce you to some of the best SF published in the 1960s.

The 1960s were a great decade for literary science fiction — it was a time when new writers were bringing new themes into the genre, and exploring old themes in radically new ways. We could easily have created a list of 100 great books published in that time. This list is intended purely to whet your appetite. I've only picked one book from each author, even though celebrated writers like Kurt Vonnegut, Samuel Delany and Philip K. Dick published several notable books in the 1960s.

Read here why each title was selected. And how my reading list suddenly expanded. The ones I've read are Solaris, Dune and Slaughterhouse Five. Now I'm specially interested in Philip K. Dick's and Samuel Delaney's...

If you are into scifi, do you know of other classics from the 1960s that should have made this list?

(I would have put stuff from Poul Anderson or Frederick Pohl, but like I said, I don't seem to know that much about scifi)

This discussion has been moved to the Tales From Tomorrow group.

Replies are closed for this discussion.

I do have all of those books or have read all of them and I would add these books from the 60's, you should read the expanded version of Stranger that Heinlein's wife released in the last few decades.  Anderson had many books but his time travel books were a good match of his SF and Norse background.

Stranger in a Strange Land Stranger was my first Heinlein ever. I think I read the original (not sure) version. An amazing rendition of the 'fish out of water' tale.

But I started reading scifi rather late in my life so I sort of missed many of those classics.

Roger Zelazny's "Lord of Light" was a favorite of mine from the 60s, amazed it didn't make it.

Can't find the cover that I have. THink it had the main line on the cover, "His followers called him mahasamatman, and said he was a god. He preferred to drop the maha- and the -atman, however, and called himself Sam" 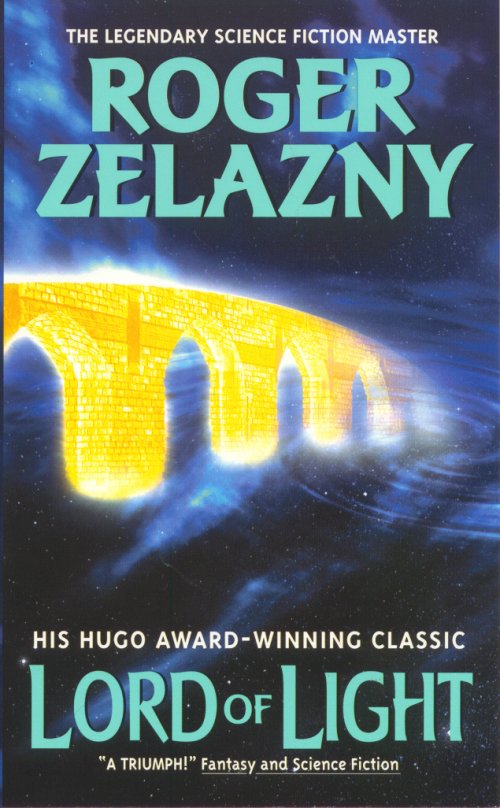 I posted this discussion here before I started the Tales from Tomorrow group.

That's where it should now be... but since we can't 'move' discussions between groups on this site,  I'll close this one and copy it over there.