RichardtheRaelian left a comment for Lynn
""Happy Birthday!""
5 hours ago

Loren Miller commented on Loren Miller's blog post They Don’t Make ‘Em Like That Anymore
"Terry Thomas was the proper British bounder for sure, Michael, who got his proper comeuppance as…"
20 hours ago

Loren Miller commented on Loren Miller's group Quote Of The Day
"There is nothing behind the curtains of religions, people put there whatever their imaginations can…"
yesterday

Mrs.B commented on Sydni Moser's group Coffee Break
"Not when the others are taking over dominance."
yesterday

Stephen Brodie commented on Sydni Moser's group Coffee Break
"Islam rose from 4% to 8% since 2001. Islam's rise was mainly due to immigration and not…"
yesterday

Chris B commented on Loren Miller's group Quote Of The Day
"I totally agree with the ayatollah: "There's no fun in Islam.""
yesterday

Loren Miller commented on Loren Miller's group Quote Of The Day
"An Islamic regime must be serious in every field. There are no jokes in Islam. There is no humor in…"
Wednesday

How Animals Manage to Fly in the Rain

HOW MOSQUITOES FLY IN RAIN

Mosquitoes are as adept at flying in rainstorms as under clear skies. But how is that possible? Wouldn’t rain crush a mosquito to the ground since mosquitoes weigh 50 times less than raindrops?

David Hu, an assistant professor of mechanical engineering and biology at the Georgia Institute of Technology, and his graduate research assistantAndrew Dickerson have found that while mosquitoes do get hit by raindrops, they don’t get crushed by them.

Hu discussed their research in a talk at November's APS Division of Fluid Dynamics Meetingthat was entitled “How Mosquitoes Fly in the Rain”.

The researchers measured the impact forces of raindrops on both regular mosquitoes and custom-built mosquito mimics. The mimics were made from small Styrofoam spheres of mosquito-like size and mass. They used high-speed video to capture images of the mosquitoes getting hit with raindrops.

Since the bugs fly so slowly (a maximum of 1 meter per second) compared to the drops (which fall between 5 to 9 meters per second), the mosquitoes cannot react quickly enough for avoidance, and most likely cannot sense the imminent collision.

Hummingbirds shake their heads to deal with rain 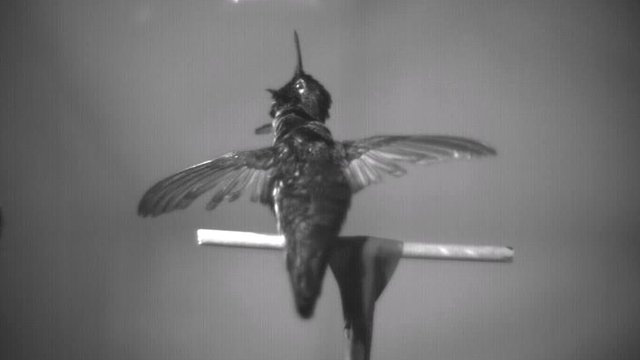 The cameras show how a hummingbird shakes its head to get rid of the water (Footage: University of California, Berkeley)

Slow-motion footage has revealed how a hovering hummingbird is able to cope with wet weather.

The cameras show that the delicate bird shakes its head with such acceleration that it can reach a g-force of 34 (Formula 1 racing cars typically reach less than 6g).

This mid-air manoeuvre takes just 0.1 seconds and removes almost all of the water droplets from its feathers.

The research is published in the journal of the Royal Society Interface.

Professor Robert Dudley, one of the authors of the study, from the University of California, Berkeley, said: "It is the extreme mobility - its head is going through 180 degrees in a 10th of a second or less - it is just extraordinary."

The Anna's hummingbird is found in cloud forests and the neo-tropics where rainy days are common, and is able to remain active even in very wet weather. 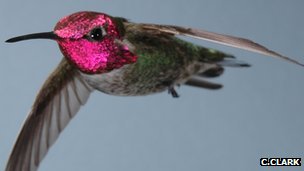 Yet, until now, nobody knew how the bird did it.

To find out, the researchers trained their hi-tech cameras on a bird as it fed from its feeder, and then sprinkled it with water.

Lead author of the study Dr Victor Ortega-Jimenez, from the University of California, Berkeley, said: "We simulated three different types of rain - and the hummingbirds did this extreme oscillation in light, medium and heavy rain.

"It seems it is a common behaviour of hummingbirds."

The researchers were surprised that the hummingbirds were able to generate such extreme forces while in flight.

Professor Dudley said: "We know visual information is the key to flight control, and, obviously, when you are shaking your head, you don't have that input of flight acceleration, and yet they remain basically stable - they are not falling out of the air."

The scientists said their findings could help engineers to develop micro air vehicles that could cope with unsettled weather or even washing machines with an improved drying spin.

How Do Flies, Gnats, Bees, Wasps, and Other Insects Fly In Heavy Rain Without Being Hit by Raindrops and Why?

A falling drop of rain creates a tiny pressure wave ahead, below the raindrop.

This wave pushes the fly, gnat, wasp, bee, or insect sideways and the drop misses it.

Fly swatters are made from mesh or have holes on their surface to reduce this pressure wave, otherwise flies would escape most swats.

The insect world is not like our own, and quite different if you really think about it.

Because of the difference in scale, we can regard a collision between a raindrop and a gnat as similar to that between a car moving at the same speed as the raindrop, speed does not scale, and a person having only one thousandth the usual density, for example, that of a thin rubber balloon of the same size and shape.

A balloon is easily bounced out of the way, and would burst only if it was crushed up against a wall.

I loved this analogy!

Picture a giant boulder falling on a human who was also falling through space. Unless the human gets hit straight on, the boulder will probably push us over to the side -- just like raindrops do to mosquitoes. The mosquitoes will not get crushed by rain, but instead may get rotated

But the question I have is: why would a mosquito want to fly in the rain?

They probably don't even know it is raining, they need to fly all of the time searching for blood.

But I would think that when it's raining, the mammals that they suck their blood of, are probably less "findable." For some reason mosquitos love me, but I have never been bitten by a mosquito in the rain.