Davy commented on Sydni Moser's group Coffee Break
"I will leave you with a few views upon the monarchy from the past. What can they see in the longest…"
10 hours ago

RichardtheRaelian commented on Loren Miller's group Quote Of The Day
"Hello Loren! I fail to see how the bible connects with schizophrenia since I'am a…"
19 hours ago

The veil of opulence

This post has to do with the two competing visions for America's future, that of the 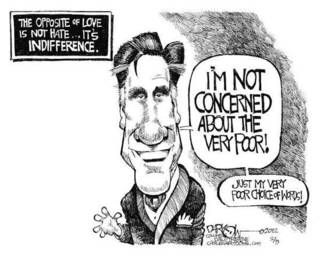 Romney-Ryan ticket, vs that of the current administration. I just read this EXCELLENT opinion article in the NYT blog "The Stone" which is mostly on philosophy, most often ethics. The writer, Benjamin Hale, describes a wonderful experiment of which I had never heard before, called "the veil of ignorance". It sounds bad, but it is actually very GOOD, for fairness. Forty years ago, John Rawls, an American political philosopher, asked his readers to ask themselves how they would create a society from scratch, ignoring what they knew about their present position in life: if you didn't know how you would end up, under which circumstances you'd be born, how healthy or talented or rich you'd turn out to be, etc., etc., how would you design a society so that it ended up being a fair society? In other words, a society based on justice, that would best help everyone maximize their potential and fulfill their dreams. Rawls called this "the veil of ignorance".  It was a brilliant idea, in my opinion, because it forces people to at least engage in the thought exercise of imagining what it must be like to be someone else, mostly someone more disadvantaged than we are. Apparently it was not easy to make abstraction of one's current vantage point. This does not seem surprising to me, it's hard work to put ourselves in someone else's shoes, but it something we must do if we care about fairness and justice. Because fairness has to be, by definition, impartial.

Benjamin Hale goes on to describe the alternative model, which he coined, masterfully in my opinion, "the veil of opulence":

Those who don the veil of opulence may imagine themselves to be fantastically wealthy movie stars or extremely successful business entrepreneurs. They vote and set policies according to this fantasy. “If I were such and such a wealthy person,” they ask, “how would I feel about giving X percentage of my income, or Y real dollars per year, to pay for services that I will never see nor use?” We see this repeatedly in our tax policy discussions, and we have just seen the latest instance of it in the Tax Policy Center’s comparison of President Obama’s tax plan versus Mitt Romney’s tax plan.  “He’s asking you to pay more so that people like him can pay less,” Obama said last week, “so that people like me pay less.” Last Monday he drove the point even harder, saying that Romney’s plan is like “Robin Hood in reverse.” And certainly, Romney’s selection on Saturday of Paul Ryan as his running mate will keep this issue in the forefront of our political discourse.

The veil of opulence is dangerous because it gives the impression of fairness: how fair is it that people with a lot of money should give some of their money away so that others who have far less live a little better? It's their money after all. But because this perspective is partial to only one vantage point, it can't be fair. How can justice be partial? It would be an oxymoron. The veil of opulence blinds people to one simple, unpleasant fact of life: sheer luck. That does not imply merit is not important. To give my personal perspective, I was born into a lower middle class family, my parents worked very hard but had only elementary school education; however, they valued education and instilled this value in me. I was lucky I was born into that family (and not another type of family) and I was born mentally and physically very healthy. I worked and studied hard, but I'm also lucky because I was born with a certain ease to learn and study that is no doubt, an advantage over others who had to struggle in school. I was also extremely lucky that I was born and raised in Uruguay, a country with a very good (back then) public university system, where tuition cost exactly ZERO money. Yes, I went to college for free, and I lived at home, where my mom fed me and clothed me, with her hard earned money (my dad died when I was 15). I decided I wanted to pursue a graduate degree, I fell in love with molecular biology, so I came to the US, I got a scholarship to get my PhD, I did not pay tuition, I received a stipend (very modest but it allowed me to follow my dream of becoming a scientist!). This happened because there was a scholarship system in place, for those of us without money. Damn, I'm such a lucky and privileged person! I'm dead serious. I want others to benefit from what I benefited. I'm doing well, I live comfortably, I'm not going to complain about being taxed so others who were not as lucky as I was, can aspire to their own fulfillment. If I looked at life through the veil of opulence, I would instead say: "hey, I worked damn hard to get where I got, I was self-reliant, others can do the same if they just work as hard, it's MY money, I want to do with it what I want!"

There is a big difference between these two world views, and it is the main difference between Obama's view and Romney's view. If fairness is important to your sense of morality, ask yourselves: which type of society would be best to maximize the well being of most people?

Read the entire article, it is like a breath of fresh air: "The Veil of Opulence"

Actually, I liked this example of how "the veil of ignorance" fairness approach helps improve at least some sectors of society already; I did not know this about American football!

We already employ this veil of ignorance logic in a wide range of areas, many of which are not limited to politics. An obvious case is in the game of football. During draft season, the N.F.L. gives the losingest team the opportunity to take first pick at their player of choice. Just recently, the Indianapolis Colts, the worst team last year, selected as their..., arguably the most promising player in recent memory. In the interest of firming up the game, in the interest of being fair, the N.F.L. decided long ago to give the worst teams in football the best shot at improving their game. At the beginning of the season, nobody knows who is going to be the worst off, but they all agree to the draft rules.

As a result, football is better for it. It is both more exciting, because the teams are better matched, and it is fairer, because there is no tyranny of one or two successful franchises over others. It’s a game that even die-hard fans recognize as fair. It doesn’t inspire the same sort of grumbling that has so many baseball fans thumbing their noses at the New York Yankees. It is true that in some instances, such a policy may encourage some to game the system, but on the whole it is an important policy, and most teams continue to play to win.

Didn't know "losingest" was a word either :-)

Great article!  I should have read it sooner.  Luck does matter in our life - think how easy it would have been to have had a different life just by slightly different chance meetings and actions.  Scary, if you think about it.

I think about that often. What if my parents had stayed under the poverty line, as they actually started in life (at least my father, he was the child of a single mother who died when he was 17, he had to manage to provide for his younger brother and 7 year old baby sister, all by himself!).

My children have this very clear already; in school they met many kids from so many different backgrounds, NYC being a very diverse place. My kids know how good they have it: no college debt, supportive parents, etc. Other kids struggle because of their family background even though they are definitively not inferior intellectually or in character, to my kids.

More about Success, Luck and Life

"Success is a catalyst for failure"AUG 22

Why don't successful people and organizations automatically become very successful? One important explanation is due to what I call "the clarity paradox," which can be summed up in four predictable phases:

Very interesting. Makes sense. Maybe we all could reach our maximum level of success (or competence) and we just have to be vigilant that it doesn't go downhill from there.

We are told by Republicans that the reason successful people don't exceed is because they would have to pay more taxes. There was a full page advertisement on the third page of the NYT's earlier this week, or  weekend from someone who didn't quite make it onto the Forbss richest 400. He said if his taxes went up he would close his financial business and his employees would become unemployed.