With the passing of the queen and all the pomp and pageantry going on here in Australia, people are…See More
24 minutes ago
0 Comments 0 Likes

Loren Miller commented on Loren Miller's group Quote Of The Day
"Doug: Allow me to cite from the introduction to the Quote of the Day group: Please keep your…"
8 hours ago

Doug Hanlon replied to Lachailill McLennan's discussion Think about it and consult a dictionary before commenting. I've gotten some idiotic responses to this. in the group Quote Of The Day
"Patriotism is the extension -- in theory -- of an ethical principle to all the people of your…"
8 hours ago

Doug Hanlon commented on Loren Miller's group Quote Of The Day
""How would you react if your 11-year-old daughter had a sexually transmitted infection? How…"
9 hours ago

Davy commented on Sydni Moser's group Coffee Break
"I will leave you with a few views upon the monarchy from the past. What can they see in the longest…"
9 hours ago

Loren Miller commented on Loren Miller's group Quote Of The Day
"According to Google: Schizophrenia is a serious mental disorder in which people interpret reality…"
11 hours ago

Chris B commented on Sydni Moser's group Coffee Break
"A good video, Stephen, and I totally agree. When the cleaning starts I'll throw in the Dutch…"
16 hours ago

RichardtheRaelian commented on Loren Miller's group Quote Of The Day
"Hello Loren! I fail to see how the bible connects with schizophrenia since I'am a…"
18 hours ago

Here's a great blog post in Scientific American: "How Your Moral Decisions are Shaped by a Bad Mood" Remember the trolley dilemma and the fat person sitting on the bridge? It turns out that whether people were put first in a positive or negative mood in an experimental setting, changes how people respond to the trolley dilemma. People in a good mood tend to agree with the questions "do you agree that pushing the fat person in the path of the trolley is acceptable?" but also with the opposite question. In other words, people tended to respond positively to the question, regardless of the answer! People in negative mood tended to disagree.  This suggests that mood does not change moral emotions, because people in a good mood did not agree more with pushing or not pushing, they simply tended to answer the question, however it was frame, in the positive. The moral thought hypothesis can explain these results. Positive moods validate accessible thoughts, and negative moods invalidate accessible thoughts. If the question is framed as pushing is good, then the person thinks about "pushing". The act of pushing becomes and accessible thought, and this validates the thought of pushing. Or "not pushing". It depends on how the question is framed. That is a little scary but I think it's important that we humans understand that we are not as rational as we'd like to think, especially when it comes to moral decisions, and that emotions and cognition are very interrelates, and there may not be such a "neat" separation between the two as we like to believe.

How Your Moral Decisions are Shaped by a Bad Mood

Weighty choices can be shifted by surprising factors Imagine you’re standing on a footbridge over some trolley tracks. Below you, an out-of-control trolley is bearing down on five unaware individuals standing on the track. Standing next to you is a large man. You realize that the only way to prevent the five people from being killed by the trolley is to push the man off the bridge, into the path of the trolley. His body would stop the trolley, saving the lives of the five people further down the track.

What would you do? Would you push the man to save the others? Or would you stand by and watch five people die, knowing that you could have saved them? Regardless of which option you choose, you no doubt believe that it will reflect your deeply held personal convictions, not trifles such as your mood.

Well, think again. In a paper published in the March edition of the journal Cognition, a group of German researchers have shown that people’s mood can strongly influence how they respond to this hypothetical scenario. Though this general observation is well-known in the literature on moral judgments and decision making, the current paper helps to resolve a question which has long lurked in the background. That is, how does this happen? What is the mechanism through which moods influence our moral decisions?

Unfortunately, given the various shortcomings of previous investigations on this particular topic, there are a variety of other explanations for the observation thatemotions, or the more general emotional states known as moods, affect how people may respond to the footbridge scenario.

For example, moods could influence the thought process itself.  This is the “moral thought” hypothesis: just as something like attention may change our thought process by biasing how we perceive two choices, mood could also bias our thought process, resulting in different patterns of moral thinking. This is different from the “moral emotion” hypothesis, which suggests that emotions directly change how we feel about the moral choice. That is, our good mood could making us feel better (or worse) about potentially pushing, and therefore more (or less) likely to do it. Resolving this ambiguity with neuroimaging studies such as the one detailed above is difficult because of fMRI’s low temporal resolution – a brain scan is similar to taking a camera with the exposure set to a couple of seconds. This makes it difficult to faithfully capture events which happen quickly, such as whether moods change the experience of the decision, or if they directly influence the thought process.

To push or not to push? Affective influences on moral judgment depe...

People’s moods can influence moral judgment. Such influences may arise because moods affect moral emotion, or because moods affect moral thought. The present study provides evidence that, at least in the footbridge dilemma, moods affect moral thought. The results of two experiments are reported in which, after induction of positive, negative, or neutral moods and presentation of the footbridge scenario, participants were asked one of two differentially framed closing questions. In the active frame, participants were asked whether they would be active and push the man, making thoughts about pushing accessible; in the passive frame, they were asked whether they would be passive and not push the man, making thoughts about not pushing accessible. The results show that affective influences on moral judgment depended on participants’ decision frame. Compared to neutral moods, positive moods induced utilitarian responding – i.e., deciding to push – in the active decision frame, but induced nonutilitarian responding – i.e., deciding to not push – in the passive decision frame; in negative moods, exactly the opposite picture arose. The results suggest that people’s moods affect moral judgment by conferring value on moral thought. Positive moods promote and negative moods inhibit accessible thoughts.

Figures and tables from this article:

Fig. 1. Experiment 1: Relative number of utilitarian responses – i.e., decisions to push – as a function of participants’ mood (positive or negative) and decision frame (active or passive). 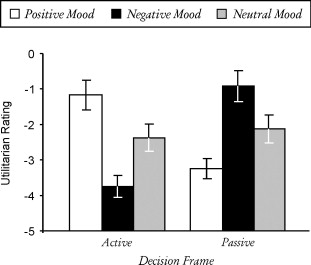 I think mood or emotion effects all our decisions, bad or good.